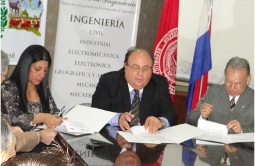 The National University of Asuncion (UNA) has committed to provide expertise during the planning, adaptation, and implementation of projects, as well as student engagement in areas that match their discipline.

Governor of Alto Paraguay, Marlene Ocampos, elected last year in April, has been a pivotal part of Alto Paraguay’s recent growth. She told ABC Color, “This is an opportunity to receive top level technical assistance to push forward our development.”  Director of the IDPPS think-tank Dr. Jose Altamirano emphasized the potential social impact of the plan.

IDPPS, the Global Peace Foundation supported think-tank, has been heavily involved in stabilizing the department of Alto Paraguay and building partnerships to promote development such as the recent agreement with the University of Asunción.

Top: A view of the Paraguay River. Bottom: A highway map of Paraguay. Alto Paraguay is noticeably underdeveloped.

The agreement brings welcomed progress to Alto Paraguay. A lack of transparency has left Alto Paraguay isolated, with no highways and only two major port cities, even though the Paraguay River runs along its eastern border. Only recently have flights begun between Asuncion and Forto Olympo. Social services and education have been severely limited.

In many ways, Alto Paraguay is representative of the region’s challenges. During a visit to Paraguay last year, Dr. Hyun Jin Moon, Chairman of the Global Peace Foundation, told Kyung Hyang Newspaper that high-risk factors like extreme poverty, political instability and corruption have deterred foreign investment until now. But he is hopeful.

Dr. Moon was attending an international conference on ethics, good governance and development hosted by IDPPS and its partners. The general consensus during the conference was that the region must go beyond an outdated system where a small elite governs the social, economic and political activity and seize the opportunity to pioneer new models of democratic, free market systems governed by universal principles and values. 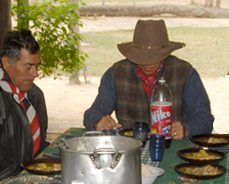 Dr. Hyun Jin Moon says grace before lunch in the town of Maria Auxilidora in Alto Paraguay along the cattle drive route.

He told ABC Color he believes Paraguay could become the center of finance and commerce in Latin America within the next five years, much like Dubai in the Middle East or Singapore in Asia. Geographically it is centrally located between Argentina, Brazil and Bolivia, and more importantly, Paraguay has unlimited human potential.  According to Dr. Moon, the generosity of Paraguayans and their tradition of honoring God in the family, community and national life are essential ingredients for the nation’s rise.

Dr. Moon’s ties to Paraguay run deep.  He fondly refers to the country as his home in the southern hemisphere. His father spent a significant period in the late 90s in local villages and investing in development and sustainability projects. In 2008, Dr. Moon took a number of young Paraguayans on a cattle drive through the Chaco, a large area in Alto Pargauy.  A humble meal from the villagers of Maria Auxilidora left a deep impression. He recalls, “I was moved that people with so little could give so much.”