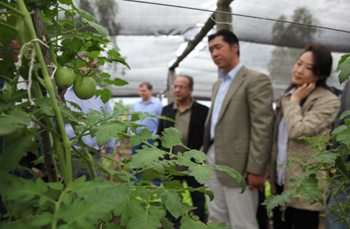 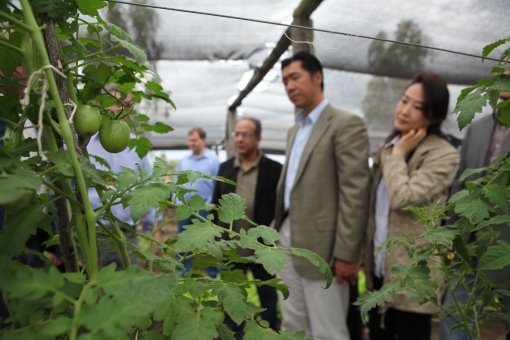 GPF has partnered with the local government to launch an organic farm in Alto Paraguay.

I see the Chaco region as a place of untapped natural and human potential. I am confident that in the near future we will see it generate significant models and precedents that will contribute to the development of the rest of Paraguay and Latin America.

Alto Paraguay is one of three departments, or states, that make up Paraguay’s Chaco region. This department has struggled to keep up with the rest of Paraguay due to political corruption and inconsistent policies and programs. As a result it has remained underdeveloped, with little infrastructure and investment. Yet, from the people that I met during my recent visit there, I know that though they currently lack resources, they have an abundance of heart and character.

There are two projects that I visited in Puerto Casado, the largest town in Alto Paraguay, that have strengthened this conviction. The Global Peace Festival Foundation (GPFF) is partnering with residents, local government and organizations to rehabilitate a major fish farm and develop an organic community farm.

The organic farm was started by GPFF, with a grant of from the government of Alto Paraguay.  It began as a community garden to experiment the soil’s arability. The project revealed that the soil is rich and can support a variety of plants. The current list of crops at the farm includes: tomatoes, lettuce, onions, basil, carrots, potatoes, zucchini, green onions, green peppers, parsley, cucumbers and medicinal herbs.

Traditionally, the residents in this region of the Chaco are not farmers. Thus, they were not familiar with land cultivation practices, and their diet did not included fresh vegetables. Related to this, heart disease and poor dental health are major health issues. In the beginning some of the residents were hesitant to try our produce. For many of them it was the first time they had access to fresh vegetables. The produce has changed their diet significantly.

The garden is supported by the townspeople who contribute towards the costs of running the farm in exchange for a weekly bag of seasonal vegetables. The next stage is to develop the commercial aspect of the operation so that it can sustain itself.

These community-driven projects not only provide food and a livelihood, they are building the confidence and dignity of the residents of Puerto Casado. They are able to work the land and ponds to provide for their families. What is more, these projects are building partnerships with universities, the government and the people to develop a long term vision and plan for development.

In the late 90s, my Father came to Paraguay and spent months fishing the rivers and living together with the local residents. It was his way of investing himself in the land and people. This is how he set the foundation for the future growth and prosperity of the region. He planted his heart and dream into the rivers and soil.

In 2008, he asked that I come to Paraguay. He told me, “Paraguay is the womb of Latin America.”  I know that a part of him still beats in this land. His dream of peace for the people that he connected with in the small villages remains alive. During my visit to Puerto Casado, I saw that the seeds he planted are now bearing fruit.

I am committed to their continued cultivation as we work to realize the dream of One Family Under God in this part of the world.