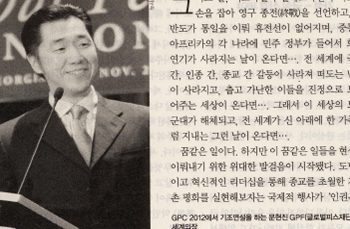 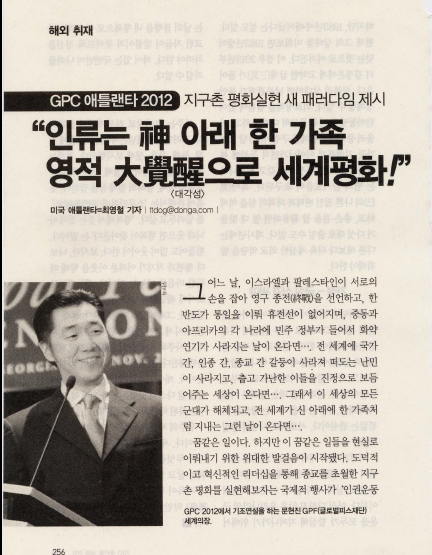 Below is the unofficial English translation:

Global Peace Foundation (GPF) chair, Dr. Hyun Jin Moon said in his keynote address, “America’s true strength lies in its moral authority as a nation rooted in spiritual principles and values which has championed human rights and freedoms at home and abroad.” These principles, he said, are enshrined in the American Declaration of Independence, making America “a nation with the aspiration to become ‘one nation under God.’” He recounted the United States’ contribution to the world over the past century, from “challenging European colonial imperialism,” to “creating international assemblies to foster peace through dialogue and reason,” resulting in The League of Nations after the First World War, and the United Nations after the Second World War. During the Cold War “American leadership, and faith in human rights and fundamental freedoms, paved the way for the eventual collapse of totalitarian, communist regimes around the world.”

“This moment may prove to be a historic crossroads, for the United States, and for the world,” Dr. Moon noted. “The time is ripe for a new spiritual awakening that galvanizes the community of righteous and faithful citizens around universal principles and shared values, not just in the U.S. but throughout the Western hemisphere and the world.”

Dr. Moon expounded on the significance of Atlanta, Georgia as the host city for GPC 2012, “a place rich with history, faith, and more importantly the center of the American Civil Rights Movement.” Atlanta is also where Former U.S. President Jimmy Carter and his wife have brought important focus to the work of  Habitat for Humanity.  Atlanta is also home to the Dr. Martin Luther King, Jr. Center for Non-Violent Change (The King Center) and The Carter Presidential Center, both co-sponsors and participants of GPC Atlanta 2012.

Dr. Moon considers the civil rights movement to be “not just as a struggle for civil rights but as America’s ‘Great Awakening’ of the 20th century.”

The youngest daughter of Dr. King and King Center CEO, Bernice A. King, said, “I don’t characterize my father as a civil rights leader, I characterize him first and foremost as a spiritual leader, as a man of God, as a moral leader who just happened to impact civil and human rights.” Dr. King’s famous, “I have a dream” speech, alludes to the self-evident truths stipulated in the Declaration of Independence, that “all men were created equal.”

Ms. King opened her address saying, “I earnestly believe that if my father were living today, his heart would be warmed by the work of this great organization around the world. And in fact, I believe without a shadow of a doubt, he would be a part of your group.“ She also called for a New Great Awakening, a “radical revolution of values”, to secure peace.

The complex situation of the Middle East, including the recent military confrontation between Israel and Palestine, the prolonged civil war in Syria that began during the regional movement for democracy, show that military and diplomatic solutions to peace have reached their limit. America has poured billions into military resources for peace in the Middle East and is now facing an economic crisis.

Middle East experts and leaders agree, ”Decades of failures to resolve the problems of the Middle East show the limitation of Track-1 diplomacy.” Track-1 diplomacy is a government-centered approach that seeks to resolve disputes through political and economic negotiations and military force. The alternative, Track-2 diplomacy, seeks solutions through non-military means, such as through spiritual and religious approaches. Dr. Moon said, “For peace to be established there must be reconciliation. But reconciliation cannot be forced; it has to occur naturally from the heart. It is logical that alternative approaches to peace-building are becoming more appealing.”

Civil society, particularly religious leaders who are familiar with the spiritual dimension of humanity, are critical parts of effectively implementing this new approach, namely Track-2 diplomacy, for peace and reconciliation in heavily disputed areas. Influential Muslim leaders and Western Christian leaders who convened at GPC Atlanta, all emphasized the need for interfaith cooperation.

Dr. Said of Nahdlatul Ulama, the largest Islamic group in Indonesia with 60 million members worldwide, said, “The possibility of reconciliation between the Islamic world and the Western world can be found in moderated Islamic forces that can bring change to extremist Islamic groups that are propagating terrorism.” Rev. Robert A. Schuller commented, “Western Christian leaders should move beyond the limitations of  their Christian world-view and accept their central responsibility – to practice universal values in the public square.” They both concluded that a fundamental spiritual paradigm shift is needed to prevent a clash of civilizations.

The Middle East is divided; tensions are escalating along religious, racial and cultural differences. GPC 2012 has been instrumental in developing solutions. If we can continue such endeavors, we can mitigate and ultimately end all conflicts. Minister of Education of the Kurdistan Regional Government in Iraq, Asmat Khalid For a number of years, GPF has worked together with influential Muslim leaders in Indonesia and Malaysia to build consensus around universally shared values. GPF was also a part of launching the Coalition for American Renewal, calling faiths to their common mission to awaken the American spirit and character, and work inter-religiously. Participating at GPC 2012 from Islam, were the prominent Muslim organization, Nahdlatul Ulama and the ministerial delegation from the Iraq Kurdistan Regional Government, and from Christianity, Rev. Robert A. Schuller from the United States, and Bishop Manoel Ferreira of the Assemblies of God, the largest Christian denomination in Brazil. All agreed that the profound and common mission of religions leaders is to secure peace through inter-religious cooperation.

Muslim and Christian leaders agreed that the vision captured in the phrase “One Family under God” and promoted through the interfaith work of GPF and Dr. Moon, is the vision needed resolve religious and regional conflicts. They committed to do their best to accomplish this vision, affirming that “One Family under God” is the common aspiration of all religions that expounds universal values and is the only means through which global peace can be attained.

Minister of Education of the Kurdistan Regional Government in Iraq, Asmat Khalid said, “The Middle East is divided; tensions are escalating along religious, racial and cultural differences. GPC 2012 has been instrumental in developing solutions. If we can continue such endeavors, we can mitigate and ultimately end all conflicts. The experience of the Korean Zaitoon unit in Iraq will attest that we Kurds are fundamentally peace loving people.”