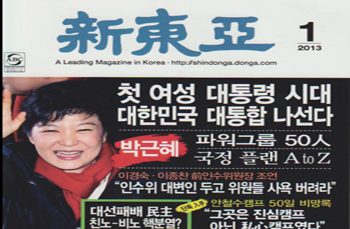 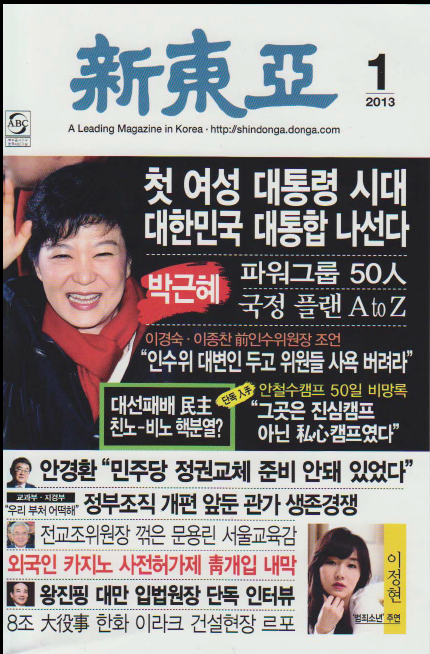 Shin Dong-A, a leading monthly magazine in Korea, published a feature article on GPC Atlanta 2012 in its New Year edition.

Below is the unofficial English translation of the first segment of the article.

“Global peace will come through a Great Spiritual Awakening based on the vision that all humanity is One Family Under God !”

Imagine a day when Israelis and Palestinians hold hands and declare the end of war, when the Korean peninsula is united and the DMZ erased, when democratic governments emerge in the Middle East and Africa and gunpowder smoke vanishes from the region… Imagine the day when struggles between nations, races, and, religions around the world disappear, when there are no more refugees, when poverty is ended, when military forces are dismantled, and all humanity is one family under God….

It sounds like a dream. But significant steps have been made to make these dreams a reality. An international conference was held In Atlanta, Georgia, considered the “Mecca” of the American Civil Rights Movement, addressing the moral and innovative leadership needed to establish peace transcending religious and cultural differences.

800 leaders from 40 nations, including 10 former heads of states, convened for the Global Peace Convention 2012 in Atlanta. Held from November 29 to December 2, the convention presented a new paradigm for global peace. The conference is considered the world’s largest international and high-level conference hosted by a civic organization.

The Martin Luther King, Jr. Center for Nonviolent Social Change (The King Center), The Carter Presidential Center, and the international service and volunteer organization, Points of Lights Institute, c0-hosted and participated in the convention. In addition, 10 former presidents of 8 Latin American nations, as well as delegations from global hot-spots like the Kurdistan Regional Government, the Nigerian government, and the Kenyan government attended the convention.

The Global Peace Convention is an annual international conference hosted by the Global Peace Foundation (GPF), a non-profit, civic organization chaired by Dr. Hyun Jin Moon, that is convened by business, political, civil society and religious leaders, scholars, and media experts from across the globe to explore solutions and generate proposals and policies for world peace. GPC Atlanta 2012 is the fourth in the series that began in 2009 with GPC Philippines in Manila, GPC Kenya in Nairobi in 2010, and GPC Seoul in Korea in 2011.
The world needs a next Great Spiritual Awakening for the 21 century in order to create world peace that transcends current disputes and struggles.
GPF is a global civic organization that is working towards the UN Millennium Goals through ongoing community driven sustainable development programs in emerging countries, and a growing global network of experts and partners from various fields. The Washington D.C.-based organization was founded in 2007 and is chartered in 22 nations. Under the vision of “One Family under God” GPF programs cultivate reconciliation, mutual respect, harmony and cooperation. Through partnerships with numerous organizations around the world, GPF is a spearheading inter-cultural and inter-religious cooperation, strengthening the family and society, and promoting a culture of service and peace.

The theme of GPC Atlanta 2012 was: “Moral and Innovative Leadership: Building Healthy Families, Ethical Societies and a Global Culture of Peace.” The conference underlined the importance of leadership based on moral principles and innovation in all areas: public and private sectors, civil society and non-profit, for an integrated effort for peace.

The key tracks included building peace in the Middle East, greater hemispheric cooperation in the Americas based on common principles and values, peace through the reunification of the Korean peninsula, and interfaith reconciliation and cooperation. Participants agreed that the ideals described in the American Declaration of Independence – that responsible participation of citizens to make a free, ethical, and righteous society – is what made America the mightiest country in the world. They also concluded that, based on these principles,the world needs a next Great Spiritual Awakening for the 21 century in order to create world peace that transcends current disputes and struggles. The Declaration of Independence states, “We hold these truths to be self–evident, that all men are created equal,” The founding principles of America eventually enabled the United States to repeal slavery.