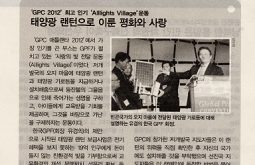 Korea’s leading magazine Shin Dong-A, published a ten page feature of Global Peace Convention Atlanta 2012 in its New Years edition. The third segment of the article highlights The All Lights Village Movement. To date, the project has donated over 3,000 solar lamps to rural villages in developing nations. The project recently expanded its donor base to the United States and Japan.

All Lights Village Movement Most Popular in GPC 2012 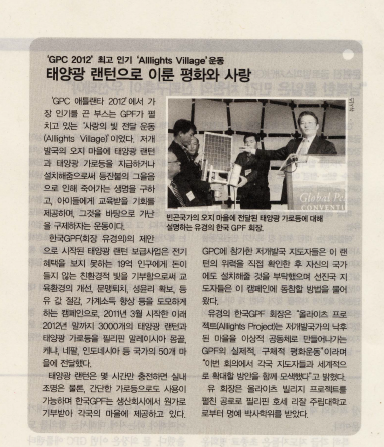 Mr. Kyoung Eui Yoo, president of GPFF Korea explains about solar lamps which were donated to the remote villages of the developing nations.

The Global Peace Foundation’s (GPF) Alllights Village was the most popular booth at GPC Atlanta 2012. Solar-powered lanterns afforded to remote villages in developing countries are saving lives that could be lost from smoke and soot inhalation, giving light for better education, and raising people out of poverty.

GPF Korea chairman, Mr. Kyung Eui Yoo, initiated the solar lantern project that has donated these environment-friendly lights to some of the 1.9 billion people who live without electricity.  The lamps have improved education, reduced illiteracy, reinforced sexual ethics, cut kerosene expenses, and increased household income. The campaign kicked off in March 2011, and by close of 2012, reports to have donated 3,000 solar powered lanterns and streetlights to 50 towns and villages in the Philippines, Malaysia, Mongolia, Kenya, and Indonesia.

The solar-powered lanterns need only a few hours to be fully charged for both indoor and outdoor use. GPF Korea has raised funds to procure the lanterns from the manufacturer who specially offers them at cost value.

Leaders from emerging countries who attended the GPC witnessed the power of these lanterns and invited GPF to bring the lights to their own countries. Leaders from developed countries expressed interest in joining the campaign.

GPF Korea President Kyung Eui Yoo said, “The Alllights Project is one of the substantive peace activities that GPF is carrying out in order to build model communities from these villages in developing countries.” He added, “During GPC 2012, leaders from several countries got together to discuss how to expand this campaign.”

President Yoo recently received an honorary doctorate degree from José Rizal University, Philippines, in recognition of his efforts with the Alllights Village Project.