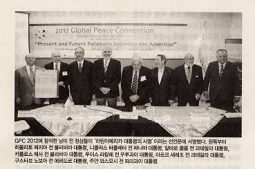 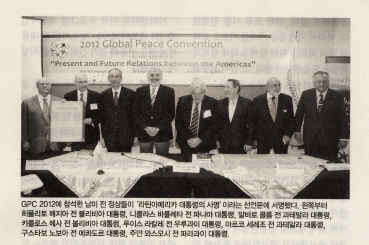 The Atlanta Declaration 2012 launched the Latin American Presidential Mission to promote hemispheric cooperation with North and South America under the names of 19 former heads of state.

During GPC Atlanta, 10 former Heads of State from 8 South American countries and delegations from 40-nations convened to launch a mission committed to a hemispheric Great Awakening in North and South America. An additional 8 former Heads of State from South America, who were not present, sent video messages of support. Together they launched a historic declaration, the Atlanta Declaration for Hemispheric Cooperation, resolving to use their past experience and leadership to work for the mutual prosperity of North and South America.

Based on its substantial Christian foundation, the American hemisphere has a common ethic.  However, North and South have walked disparate paths, harboring a protracted love-and-hate relationship. For example, the phrase ‘Down with American Imperialism’ became popular when anti-U.S. sentiments in South America peaked during the Falklands Wars, a territorial dispute between Argentina and the United Kingdom (U.K.) when the U.S. sided with the U.K.

Over the past decade, vast numbers of Latin Americans have crossed the border into the United States to pursue the “American Dream”. Today, the Hispanic population in the U.S. has surpassed Blacks to become the largest minority. No longer can it be politically and economically disregarded. Resolving the discrimination and contempt towards the Hispanic population is critical to resolving the problem between North and South America.

The United States can no longer ignore the importance of Latin America. As the economic recession in the United States continues since the financial crisis in 2008, the fast-growing Latin American economic region could offer a way forward. Circumstances have prepared North and South America to redefine their relationship and secure peace and equality in the American hemisphere. In his keynote address at the GPC opening plenary, Dr. Moon called for a Hemispheric Great Awakening through North and South America based on a consensus of common spiritual values.   Dr. Moon noted, “North and South America have shared values that emerge from their common Christian heritage. Cooperation and unity should be based on these universal principles. This is how the western hemisphere can recover its moral authority and make positive impact around the world.”

Over the past two years, GPF in Latin America has promoted moral and innovative leadership and increased regional and hemispheric cooperation based on shared values. The results are reflected in two significant declarations, the Asuncion Declaration issued during the 2010 Global Peace Leadership Conference in Paraguay and the Brasilia Declaration pronounced in Brazil during the 2011 Global Peace Leadership Conference.  The Americas Summit commenced at The Carter Center and was integrated within GPC Atlanta. The summit sought to discover avenues for improved hemispheric relations based on shared values and common challenges for lasting peace and mutual prosperity for North and South America..

Former Guatemalan president Vinicio Cerezo said, ”A leader has to have a special character, with thought and skill, but also deep moral conviction to follow a path marked by his principles.” He added, “In international relations and politics, the leader of each nation should not abandon his ethical values under any circumstances.”

“The commitment of the United States is to the belief that fairness, not force should lie at the heart of our dealings with the nations of the world. If any agreement is to last, it must serve the best interest of both nations.” ~Former U.S. President Jimmy Carter

Dr. Jennifer McCoy, director of the Carter Center’s Americas Program, stressed ethics among nations quoting former President Jimmy Carter. “The commitment of the United States is to the belief that fairness, not force should lie at the heart of our dealings with the nations of the world. If any agreement is to last, it must serve the best interest of both nations.” Meanwhile, business leaders from around the world participated in the Global Peace Business Forum to discuss how trade and commerce can generate economic prosperity in North and South America, Africa, and the Iraq-Kurdish region. They agreed that the crisis of modern capitalism rooted in corruption and greed can be resolved through moral values and principles in business. Dr. Manu Chandaria, CEO of one of Africa’s largest businesses, Comcraft Group, received resounding applause when he said, “To offer economic opportunity to Africa is the realistic means to establishing world peace.”.

See all four sections of Shin Dong-A feature on GPC 2012.