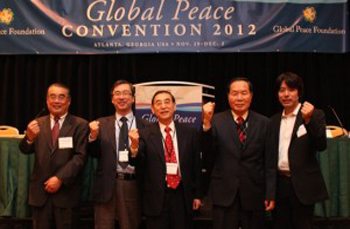 Korea’s leading magazine Shin Dong-A, published a ten page feature of Global Peace Convention Atlanta 2012 in its New Year edition. Fittingly, the fourth segment of the report featured GPC Atlanta 2012’s “entirely new” approach to the reunification of the Korean Peninsula with the magazine’s announcement of Park Geun-hye’s presidential win, making her the first woman president of the Republic of Korea.

Read the unofficial English translation of the fourth segment of the article below.

Unification of North and South Korea a key to world peace

“The ultimate resolution to tensions in Northeast Asia is the reunification of the Korean peninsula. The international community must proactively cooperate to support Korean reunification.”In 2012, political leaders in the U.S., Japan, China, and Russia were newly elected. It was the same for North and South Korea. These significant changes in leadership will be accompanied by changes in the national leadership, and in turn will have major impact on the political situation of Northeast Asia.

Northeast Asian Peace is a critical issue for the entire world that has tremendous implications on not only security and peacekeeping, but for the global economy.

Leaders from different levels convened at GPC Atlanta agreed, “The ultimate resolution to tensions in Northeast Asia is the reunification of the Korean peninsula. The international community must proactively cooperate to support Korean reunification.” They acknowledged that Korean reunification is an issue that has significance not only to Northeast Asia but the world. Dr. Moon noted in his keynote address that North Korea and the Middle East have military ties. The record breaking U.S. deficit is fueled by enormous government spending to prevent nuclear proliferation and provocation.

Experts from various fields were impressed with Dr. Moon’s keynote address that connected three critical challenges: interfaith cooperation for peace, the need for a hemispheric great awakening in North and South America and Korean Unification. One participant commented, “This is an entirely new approach.” 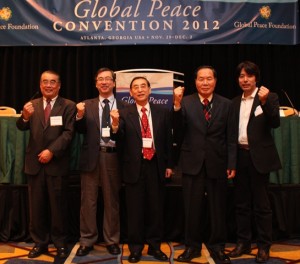 In 2012, Dr. Moon and GPF-Korea launched the “Korea United Campaign”. The campaign is an integrated movement of grassroots and high level campaigns that connects reunification to everyday practice. The initiative has brought together 400 civic organizations to develop a shared vision for a united Korea. In his keynote at GPC Atlanta, Dr. Moon particularly emphasized the importance of a grassroots driven movement for unification. During the conference, Kyungnam University Emeritus Professor Tae Hwan Kwak hosted a session on reunification of Korean peninsula. Scholars representing the U.S., Japan, Russia, and China discussed each nation’s view and role for Korean unification.

GPC 2012 also attracted renowned international policy research institutions such as Brookings Institution and the Heritage Foundation. The Carter Center co-hosted the Americas Summit, the King Center held a special session on the

GPC Atlanta 2012 concluded that world peace cannot be achieved without considering humanity’s fundamental values. It called on leaders in every sector of moral principles and values to lead a spiritual great awakening. GPC 2013 will be held in Kuala Lumpur, Malaysia, the multi-cultural, inter-religious center of Asia.