Statue of Liberty Reminds America Why It Has Been Blessed 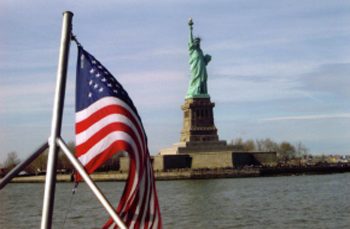 Lady Liberty is a reminder of why America has been blessed.

“I firmly believe that God has blessed America not for itself but for the sake of the world. As a “shining city upon a hill”, America is to give hope to all as a model of a unified world. America is to e a place where people of all races and backgrounds can discover the deeper basis of human value; that “under God” all have been endowed, equally with the same essential rights. America is meant to be a living demonstration that all people of the world are to be one family under God.”

Today, the International Young Leaders Assembly visited the Statue of Liberty during their cultural excursion of New York City. Although the United States has sometimes struggled to manifest its founding principles by uplifting the dignity of all people, Lady Liberty stands are a reminder of why the United States has been blessed.

Read the blog post that appeared on Global Peace Foundation about the beacon of America’s values.

Not like the brazen giant of Greek fame,
With conquering limbs astride from land to land
Here at our sea-washed, sunset fates shall stand
A mighty woman with a torch, whose flame
Is the imprisoned lightning, and her name
Mother of Exiles. From her beacon-hand
Glows world-wide welcome; her mild eyes command
The air-bridged harbor that twin cities frame.

“Keep, ancient lands, your storied pomp!” cries she
With silent lips. “Give me your tired, your poor,
Your huddled masses yearning to breathe free,
The wretched refuse of your teeming shore.
Send these, the homeless, tempest-tost to me,
I lift my lamp beside the golden door!”

Emma Lazarus wrote this poem about Lady Liberty as part of an effort to raise funds for the completion of the statue. The poem now adorns the inner wall of the Statue of Liberty’s pedestal.

Lady Liberty stands at the mouth of the Manhattan harbor welcoming the world’s weak and tired, those worn by the troubles of their old world, and promising a new life of opportunity and freedom.  She embraces every person who comes to her shores,  honoring the sacred value of each life.

She has become a symbol of the principles that the United States was built on and continues to work towards, an iconic representation of international friendship, cooperation, human dignity, hope, pride and compassion.

Although there are stains on the history of this young country, Lady Liberty continues to stand as a beacon of hope and promise.

The Statue of Liberty was a gift of friendship between France and the United States. She is an example and result of international and national cooperation. The statue herself was funded by the French people. However, there were insufficient funds to erect her pedestal. The symbol of America’s values and vision was at risk of being lost. Yet, many different Americans: artist, business and community leaders, middle and upper class, collectively took ownership to support the project.

Journalist and entrepreneur Joseph Pulitzer was one such person. In his publication, New York World, he ran the following appeal.

“We must raise the money! The World is the people’s paper, and now it appeals to the people to come forward and raise the money. The $250,000 that the making of the Statue cost was paid in by the masses of the French people- by the working men, the tradesmen, the shop girls, the artisans- by all, irrespective of class or condition. Let us respond in like manner. Let us not wait for the millionaires to give us this money. It is not a gift from the millionaires of France to the millionaires of America, but a gift of the whole people of France to the whole people of America.”

The popular appeal raised $100,000 in six months, enough for the pedestal. Most donations were under $1, which equates to approximately 125,000 Americans funding the project.

The Statue of Liberty was erected in 1886, a result of ownership over common vision and values, and teamwork from every tier of society.

Lady Liberty stands as a symbol of hope to many weary immigrants, and an icon of human dignity and compassion. No matter where you came from or what your story, she welcomes you with her warm light, guides you to her shores, and offers refuge.  Lady Liberty embraces all walks of life, for she acknowledges that all life is sacred, as how God intended.

She is much more than just an amazing engineering feat.  She stands as a symbol of liberty, justice, love, and the idea that all of humanity is one family under God.  She reminds us all that we have a responsibility to one another to protect and ensure a brighter future for each generation that is to follow.