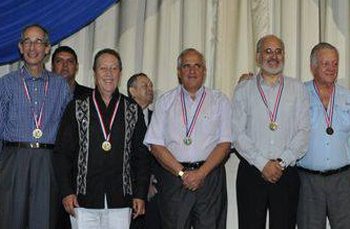 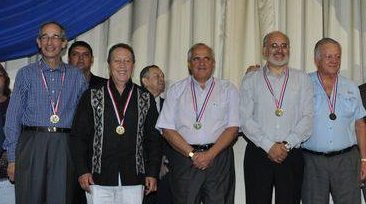 Five former presidents, members of the Latin American Presidential Mission , demonstrated their continued commitment to public service, offering their experience and insights during the special sessions of the international conference on “Governance, Ethics and Development”, held in Asuncion, Paraguay on June 11. The Latin American Presidential Mission was a co-convener of the conference.

“Development and Democratic Sustainability vs. Populism”

In the session entitled “Development and Democratic Sustainability vs. Populism” former presidents Carlos Mesa of Bolivia and Alvaro Colom of Guatemala candidly described the challenges of establishing political stability and development. They emphasized the importance of republican values and service to the people.

Former President Mesa warned against constructing systems of power based on one person. “When the political process is a person, when a person is revolution, is change, is legitimacy, democratic institutions are weakened or destroyed completely. It is a terribly destructive factor,” said President Mesa according to ABC Color.

President Mesa said that the presence of what he called “neo-populous states” in Latin America does not signify a trend towards authoritarianism. Instead he observes that Latin America “is progressively strengthening its democratic mechanisms of reform and republican values.”

ABC Color reported President Colom describing the significant progress that Guatemala has made. Ten years ago, it would have been unthinkable to have investments from Chile, Brazil and Peru like there are today. President Colom commented that healthy populism works for the citizens: to reduce poverty, improve health coverage, education, and care for the young. However, populism instated for personal electoral interests is damaging.

Former senator and current Minister of the Court of Accounts of Uruguay, Ruperto Enzo Long, who also sat on the panel, stressed that ethics must underlie all policies for economic and social development. In his home country, policies have not closed the gap between rich and poor by stimulating a vibrant middle class, instead cash transfer programs have stagnated generations of citizens in poverty.

UltimaHora reported President Wasmosy calling Paraguay’s recent exclusion from MERCOSUR, a regional trade organization, “selfish” and based on “meaningless ideological disputes.” He said, “Without freedom there can be no trade integration.” He called for greater regional cooperation based on shared values and common interests.

According to UPI Español, fellow panelists, Brazilian Deputy Nelson Maquezelli, assured Paraguayan leaders that Brazil is working to receive Paraguay back into MERCOSUR “with the red carpet”.

The session also examined the challenges of ethical and sustainable economic growth, particularly the challenge of conserving natural resources for future generations while meeting the urgent needs of the most vulnerable in Latin America. Conclusively the session recognized the need to identify the unique strengths of each nation while generating a common regional and global vision upon which long-lasting economic relations can grow. 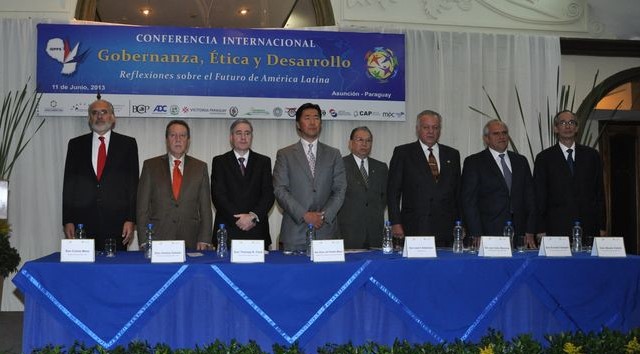 Members of the Latin American Presidential Mission stressed the importance of ethics in governance and development.

President Semper stressed the need for a return to ethics in politics. Politics, he said, should be a dialectic of ideas discussed before the people, not a monopoly of one ideology.

Both former presidents stressed that democratic stability will open doors to international trade and investment and economic progress in Latin America.

The members of the Latin American Presidential Mission have pledged  to secure better hemispheric cooperation and regional development, and put forth  their experience, knowledge and testimony to do so. They have reached a consensus that these goals can only be achieved by upholding certain universal principles and values.