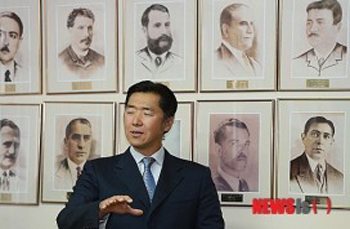 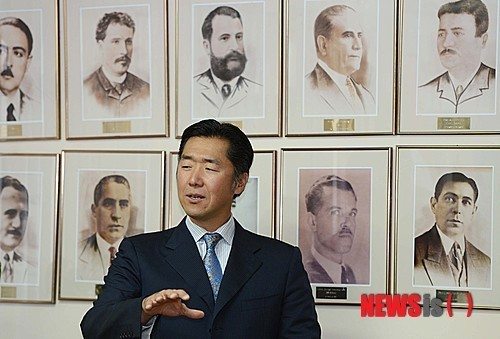 Dr. Moon visits Mayor Samaniego at the Asuncion City Hall where he received recognition as a “distinguished visitor” for GPF’s work in Paraguay. Credit: NewsIs

“The story of Paraguay must be told to the world,” Dr. Moon told representatives of the Korean media during the opening banquet.

Several articles focused on budding Paraguayan-Korean relations. At the conference, Korean businessmen from leading financial, development and consulting agencies were in attendance. Special sessions like the one entitled, “Challenges in Integration: Pursuit of Good Business” examined the viability and benefits of investment and trade opportunities between the two countries.

In his opening remarks, Dr. Moon noted the special relationship between Korea and Paraguay. When Koreans could not access the Americas, Paraguay opened its doors. It was made palpable during the opening banquet when a Korean-Paraguayan singer sang a traditional Korean folk song.

Dr. Moon urged the two nations to work together to continue Paraguay and Latin America’s economic and moral transformation for the benefit of both nations. Paraguay has experienced rapid economic growth in the past years, but also a growing gap between the upper class and lower class, which constitutes 40% of the population, reported NewsIs. According to one of the articles, Dr. Moon emphasized governance based on moral values as the foundation for solid economic growth.

In addition, NewIs covered Dr. Moon’s meetings with former presidents of Latin America, including President Juan Carlos Wasmosy of Paraguay. He also met with current president Federico Franco and incoming president Horacio Cartes, to whom he is reported to have pledged to match the amount raised for a national development fund.

Dr. Moon was also recognized as a “distinguished visitor” by the mayor of Asuncion for the work of the Global Peace Foundation. Since 2008, GPF has been partnering with the Ministry of Education of Paraguay to develop ethics and moral values education for students. The research institute IDPPS that has been articulating a vision and blueprint for national development, is also supported by GPF. Many community-led development projects in Puerto Casado, known as the most barren region in Paraguay are also spearheaded by GPF.

The story of Paraguay as told by NewIs is one of hope and anticipation. Dr. Moon said at the close of his remarks, “You[Paraguay] have overcome great adversity and are still standing tall, poised to grasp the future with all the hunger and hope of an undying champion. The vision of “One Family under God” can inspire and motivate a spiritual movement of renewal here in Paraguay and throughout the Americas.”

See the original articles in Korean: