Conference Calls for Models of National Development based on Universal Principles 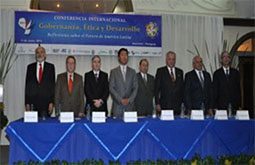 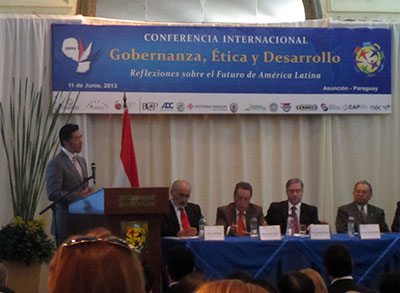 Through July and August, 8 Latin and Central American countries celebrate their independence day. The recent conference on “Governance, Ethics, and Development” affirmed that Latin America is on a verge of an era of stability and economic opportunity.

In his address at the conference opening plenary, Dr. Moon observed that although both Americas were settled by explorers carrying dreams of spiritual and economic opportunities, the stories of North and South America “unfolded differently with real qualitative and quantitative consequences for their peoples.”

The first 13 states that became the United States of America began as British colonies. Riding the waves of the Renaissance and Reformation, Great Britain had made strides to becoming a constitutional government that recognized the rights of every free Englishmen. The founding fathers of the United States drew upon these precedents to embark on their bold experiment: to build a nation that recognized and protected the rights and value endowed by the Creator to all men, a nation ruled by the people and for the people.

South America, however, took on the culture and political structures of the Iberian Peninsula. It became a bastion of old Europe; and to this day, feudalistic remnants are present: small elites control the social, political, religious and economic lives of the nation, with an ever present gap between the rich and poor.

A Latin American awakening would shake off these outdated vestments and make way for nations to emerge centered on time-tested principles such as God-given universal human rights and living for others.

These values are not foreign, to Central and South America.  Many nations are deeply spiritual, recognizing the pervading presence of God in their private and public life. Nations like Paraguay have embraced their indigenous and immigrant cultures.

Dr. Moon urged former, current and incoming presidents of Latin America to forge a road map for national development in Latin America based on values and principles.  As numerous countries celebrate their independence days, it is an appropriate  to affirm the core principles upon which they can and open an era of new social and economic opportunities.