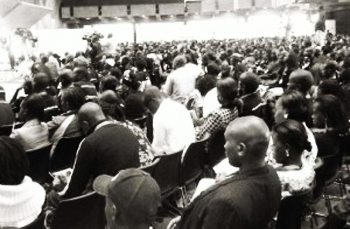 The following article was posted by the Standard Digital reporting 2,000 Kenyan youth leaders present at the National Youth Summit 2013 where Dr. Moon sent an address challenging the young Kenyans, “You young leaders are gathered here with high ideals and hope in your hearts. Are you ready to take up the challenge of becoming the moral and innovative leaders in your communities and counties, who develop a new culture of self-reliance, shared prosperity and national leadership?”

Prime Minister Raila Odinga said Kenya needs the youth, more than ever before, to move the country forward.

“The Kenya we live in today that fought off colonialism, that struggled against dictatorship, and has ushered in a new Constitution and an almost universal thirst for peace and effective government is a Kenya whose young people have always spoken loudly for the love of the country,” the PM said in a speech read on his behalf by Youth Affairs and Sports Assistant Minister Wavinya Ndeti during a meeting attended by more than 2,000 youth from the 47 counties at the National Youth Summit (NYS).

Raila said as the PM he has been part of a strong push in government to ensure that election will never again divide Kenyans as it did in 2007/8.

He urged the youth to actively take part in the two-day summit meant to help in the creation and sustenance of dialogue, mediation and reconciliation that will not allow conflict to turn into violence.

The summit themed: “Taifa langu…Jukumu langu” (My Nation – My Role) mobilized a large number of youths and will among other things address three main pillars; building a culture of peace and reconciliation, value based leadership and governance, and entrepreneurship and skill development. 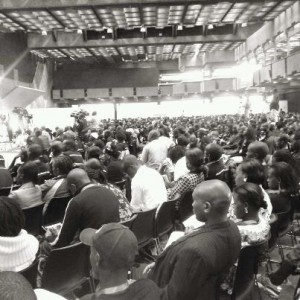 The National Youth Summit posted this facebook picture of the KICC packed with representatives from all 47 counties in Kenya. National and international leaders appealed to youth to uphold peace during the upcoming presidential elections.

The summit seeks to enhance peace and reconciliation among the youth and improve nationalism and patriotism among other things.

Raila said the youth are the future and they need to stand on the shoulders of older generations that love Kenya and have struggled to develop her.

“In the coming days and weeks, you must stand for peace, responsible voting and continued involvement in how the country is developed,” said Raila.

He said the Government was also looking into providing incentives to the private sector to provide more opportunities for internships to young people.

Ndeti warned the youth against politicians who want to use them for their own useful gain. She also told them to make a decision that will help avoid a repeat of violence witnessed in the last General Election.

The Republic of Seychelles Founding President Sir James Mancham urged the youth to bring more statesmen than politicians to leadership.

“Your future and that of Kenya lies before you today, time has come for you as the representatives of the young generations to become proactive in the search of reconciliation. Goodwill, wisdom and statesmanship will move this country forward,” said Sir James.

He said, based on newspaper reports, he believes Kenyans are ready and committed to seek reconciliation and brotherhood.