Lincoln’s Pursuit of the Founding Vision of America 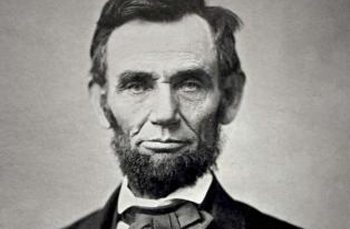 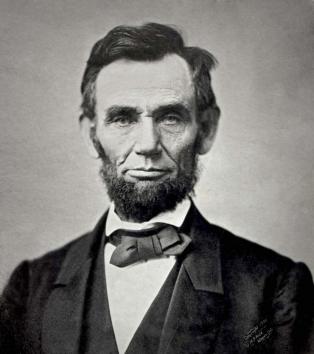 16th President of the United States of America, Abraham Lincoln issued the Emancipation Proclamation and was instrumental in passing the 14th Amendment to the U.S. Constitution, in essence ending the 250 year-old institution of slavery in America.

“In giving freedom to the slave, we assure freedom to the free — honorable alike in what we give, and what we preserve. We shall nobly save, or meanly lose, the last best hope of earth.” Abraham Lincoln, Letter to Congress 1862

January 21, 2013, President Barack Obama, the first black president of the United States of America is sworn into office for his second term on the steps of the United States Capitol. For the auspicious occasion he selects two bibles: Dr. Martin Luther King, Jr.’s personal bible and the small velvet covered bible used to swear in President Abraham Lincoln. They commemorate two significant milestones in U.S. History, 50 years since Dr. King’s “I Have a Dream” speech in 1963, and the 150th anniversary of the Emancipation Proclamation , issued by President Lincoln in 1863.

150 years later, one wonders what drove the lanky, and thoughtful president from the backcountry of Illinois to so aggressively dismantle the two and a half century-old institution of slavery. Hundreds of books, multiple recreations on stage and film like the most recent by Daniel Day-Lewis in 2013 have explored the inner mind of Abraham Lincoln.

During his run for presidency, with tensions growing between North and South, Lincoln expressed that his primary concern was the preservation of the Union.  So much so that he even promised to leave slavery “alone where it is.”   However, even early on as president, Lincoln pushed to address the issue of slavery in the United States. He explored options to recolonize freed slaves in Africa or Latin America, to what  Frederick Douglas, one of the first free slaves in the United States and passionate abolitionist called Lincoln, “a genuine representative of American prejudice and Negro hatred.”  Many of his critics, including Frederick Douglas and outspoken abolitionist John Brown  criticized Lincoln’s slow and measured steps to addressing slavery. One must consider that underneath, Lincoln was morally committed to ending slavery, but was also a careful politician.

As Douglas later wrote, Lincoln “had the wisdom to be instructed” by events. And perhaps the outbreak of war expedited what Lincoln sought for in the first place: both the preservation of the Union and the termination of slavery.

In April 1861, the Confederate States withdrew from the Union, effectively beginning the American Civil War. Week by week, the casualty list grew: 450 at Bull Run, 346 at Rich Mountain, 2000 at Wilson’s Creek. As commander and chief of the Union Army, Lincoln read the name of every fallen solider. In their biography of Lincoln, Don Fehrenbacher describe Lincoln confidingto reporter John D. Defrees a day after the Battle of Bull Run: “John, if hell is any worse than this, it has no terror for me.”

The film captured Lincoln offering counsel to mourning widows and mothers and meticulously visiting wounded soldiers, lightening their spirits with one of his famous stories. But behind his laughter, the death toll laid heavy on his mind.

Lincoln’s personal life was also struck at the height of the war. On February 1962, the Lincolns lost 11 year old William, some say Lincoln’s favorite, to typhoid fever. In the film, even three years after the loss, Mary Todd, Lincoln’s wife weeps as if only a day has passed, “I prayed for death when my Willy died, how to endure…how will I manage?” Lincoln also quietly expressed his grief. In an earlier scene Lincoln sadly replies to his youngest who expresses, “I miss Willy,” “I do too, Taddy. Willy’s gone three years now, he’s gone.”

Perhaps this combination of national and personal loss drove Lincoln to contemplate the significance of these sacrifices, and conclude that the outcome of the suffering should not be for the benefit of North or South, but for God’s will and the betterment of humanity. 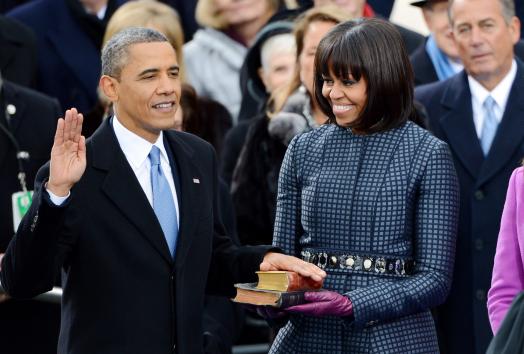 In today’s political arena it would be somewhat of an awkward expression, but in early America, affairs of state were hardly ever divorced from a sense of providence and God’s will. In his observation of 19th century America, French philosopher Alexis de Tocqueville’s marveled, “The Americans combine the notions of religion and liberty so intimately in their minds that it is impossible to make them conceive of one without the other.”

A piece of personal writing preserved by his cabinet secretary, John Hays, vividly depicts Lincoln’s introspection. Hays commented, “Mr. Lincoln admits us into the most secret recesses of his soul… he shut out the world one day, and tried to put into form his double sense of responsibility to human duty and Divine Power; and this was the result. It shows — as has been said in another place — the awful sincerity of a perfectly honest soul, trying to bring itself into closer communion with its Maker.”

Lincoln’s writing concludes, “In the present civil war it is quite possible that God’s purpose is something different from the purpose of either party…I am almost ready to say that this is probably true — that God wills this contest, and wills that it shall not end yet.” Lincoln is forming a notion that God’s will for the war is more than Northern or Southern victory.

In September 18, 1963, the victory of the Battle of Antietam is a sign for Lincoln and he announces to his cabinet that he will issue the Emancipation Proclamation , freeing all slaves in the rebel states. One member is so stunned he asks Lincoln to repeat himself, to which Lincoln replies, “God has decided this question in favor of the slaves.” On New Year’s Day 1963, Lincoln issues the Emancipation Proclamation. David Blight of Yale University describes it as a “moment to be experienced in biblical time, in spiritual time. It was an event for the soul.”

But the war continued and so did Lincoln. In June 1964, at the Philadelphia Sanitary Fair Lincoln expressed, “We accepted this war for an object, a worthy object, and the war will end when that object is attained. Under God, I hope it never will until that time.” By then, the 13th Amendment, which essentially abolished slavery in the United States, had passed through the United States Senate and was up for debate in the House of Representatives. This is where the film begins.

With opposition heavy even in the Union States, Lincoln artfully pulls strings and maneuvers through the last vestiges of the war to secure enough votes to pass the bill through the House of Representatives.

There is a scene in the film where Lincoln pauses before transmitting a communique ordering General Grant to dispatch the southern commission sent to negotiate the end of the war, to Washington D.C. Lincoln asks the telegrapher and his friend about Euclid’s Axioms and Common Notions. Lincoln recites the first common notion, “Things which are equal to the same thing are equal to each other.” He muses over the 2,000 year-old “self-evident” truth to conclude, “We begin with equality.” He orders the telegrapher to change the last sentence, commanding General Grant to send the commission to Virginia and wait for further instructions.

This stall buys enough time to garner the last votes in the House of Representatives to pass the 13th Amendment which states, “Neither slavery nor involuntary servitude, except as a punishment for crime whereof the party shall have been duly convicted, shall exist within the United States, or any place subject to their jurisdiction.”

This moment captures Lincoln as a man who made it a priority to set the right moral precedent as the foundation to rebuilding the nation. Martha Washington, historian from Cornell University described it fittingly, “In making African Americas free, we are freeing ourselves, and once we free ourselves, we can begin again.”

Soon after the passage of the Bill, Lincoln is inaugurated a second time. By then, Northern victory is certain. 30,000 people came to hear Lincoln’s speech of triumph, but instead he spoke of America’s atonement for slavery. “Yet, if God wills that it continue, until all the wealth piled up by the bondsman’s two-hundred and fifty years of unrequited toil shall be sunk, and until every drop of blood drawn with the lash, shall be repaid by another drawn by the sword, as was said three thousand years ago, so still it must be said ‘the judgments of the Lord are true and righteous altogether.”

According to historical sources, the crowd was dead silent, until African Americans in the audience began to cheer after every sentence. “With malice towards none; with charity for all; with firmness in the right, as God gives us to see the right, let us strive on to finish the work we are in; to bind up the nation’s wounds; to care for him who shall have borne the battle, and for his widow, and his orphan–to do all which may achieve and cherish a just and lasting peace, among ourselves, and with all nations.” 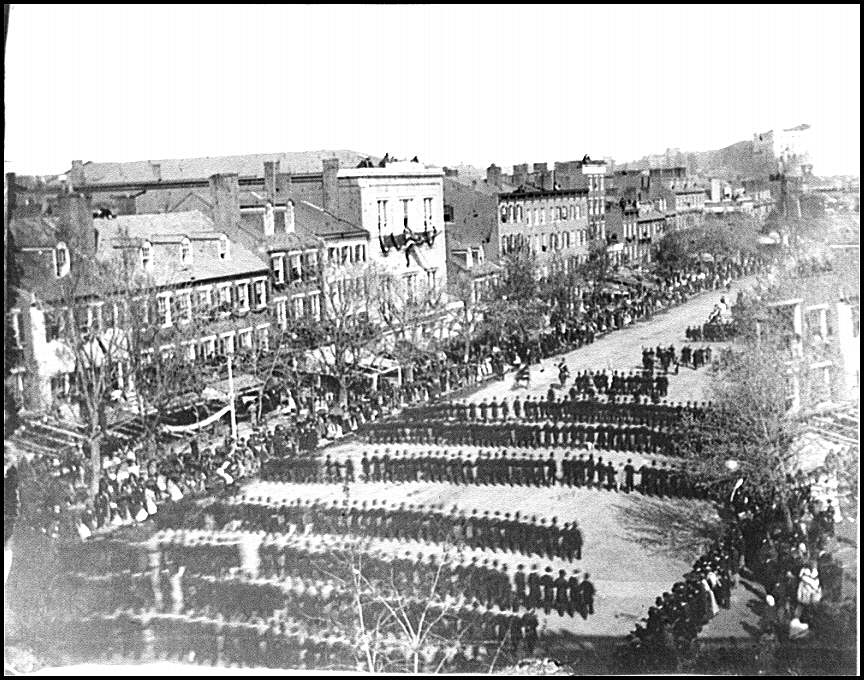 Lincoln was assassinated at Fords Theater while watching a play with his wife. The nation mourned the loss. (Credit: Library of Congress, Prints & Photographs Division, LC-B8171-1273 DLC)

The war ended a month after his inauguration, and shortly after Lincoln was assassinated. Frederick Douglas wrote, “It may be that the blood of our martyred president may be the salvation of our country. Though Abraham Lincoln dies, the republic lives.”

Centuries of segregation and suffering would follow for the African Americans, before the Civil Rights Movement would ensure the rights of people of color. But, as Stephen Prothero, Professor of Religion at Boston University said in the PBS special on Lincoln, “He (Lincoln) articulates our sense of chosen-ness, but he also articulates the fact that we have not achieved what we should have achieved, that the freedoms that we should be manifesting are always out in front of us.”

The United Sates still carries on this narrative, striving or not striving for the founding principles and values that were articulated in the founding documents of this nation, and carried forward by men and women like Lincoln: to find One Nation Under God where all men are recognized as equal and their inalienable rights endowed by our creator are secure.