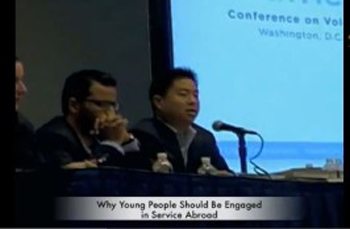 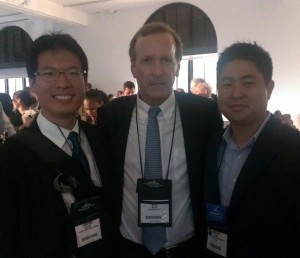 GPYC-USA, President Kenshu Aoki spoke at National Conference on Volunteering and Service on June 20th. He said, “Service is not just about short-term charity, or fulfilling service hours, but about making a lasting impact.”

Over 5,000 people convened in Washington D.C. under the theme Service Unites. Political leaders, NGO’s, volunteers and educators from around the world and both sides of the American political divide attended.

GPYC-USA, President Kenshu Aoki served as a panelist at the session: Global Youth Service Leaders: Connecting Youth to a Global Service Movement. Panelists included Hammam Juraied, Manager of Princess Al Anood Center for Youth Development in Saudi Arabia, and Raaida, Mannana, Coordinator of the 2nd World Summit on Youth Volunteering and RED2021. The session was moderated by Melissa Golladay, Director for Professional Leadership Exchanges and Youth Engagement at Partners of the Americas.

Mr. Aoki spoke on the question, “Why young people should be engaged in service abroad.” According to the GPYC-USA report, Mr. Aoki emphasized that “Service is an effective means of character education.” Overseas service, in particular, reveals universal values that bind humanity together. Mr. Aoki also highlighted the transformative power of service on the lives of those who are served and those who serve.

Global Peace Youth Corps has chapters in over 22 countries. This year a GPYC-USA will send a group to serve in La Represa, Dominican Republic. Later, in August, the International Youth Leadership Assembly will convene young entrepreneurs from over 40 countries in a practicum of leadership in peace like the UN and World Bank, concluding in Washington D.C. for the commemoration of the 50th Anniversary of Dr. King’s “I Have a Dream” speech.

For the full article or more information on the summer programs visit: www.globalpeaceyouth.org