Report of Paraguay Forum on "Character Formation of Paraguayan Youth" 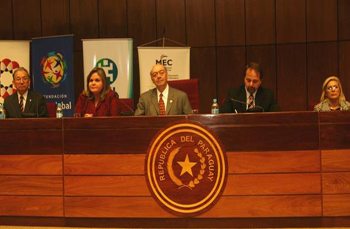 Since 2008, Paraguay’s Ministry of Education and Culture, in partnership with Global Peace Foundation has placed added emphasis on character competency education.  With the belief and understanding that is commonly held by organizations including the YMCA and the National Service-Learning Clearinghouse, that academic competencies are not enough to equip students with the tools necessary for a successful future, additional  curriculum has been introduced. This includes areas that focus on character and leadership skills such as communication, mediation and service.

In early June of this year, Phase I of the Character and Creativity Initiative (CCI) program was successfully completed. During this initial phase over seven hundred teachers were trained and educated in the CCI curriculum.

On June 17th, following the conclusion of Phase I, newly trained educators, students, teachers and administrators, convened for a forum on “”Character Formation of Paraguayan Youth”” at the National Congress of Paraguay, a sponsor of the forum. Global Peace Foundation, Ministry of Education and Culture, the Office of Congresswoman Lilian Samaniego, Together for Education and the Organization of Inter4American States (OEI) at the Congress of Paraguay were additional sponsors.

What was meant to be a modest gathering of educators, students and legislators, turned into a full house.  500 plus individuals, from all 17 states of Paraguay, gathered to share their experience and input on how their schools have been changed through the character education curriculum.  They also voiced their hope for continued implementation of the curriculum. This unexpected turnout forced organizers to “bring hundreds more chairs” to accommodate those who found themselves “standing at the rear and on the steps of congress.”

The forum was opened by the President of the Congress, followed by the unveiling of Phase II of CCI by GPF’s CCI Director, Juan Carlos Tominaga. Phase II will focus on nurturing creativity and building a transformative school culture. Ministry of Education officers, principals and teachers expressed their enthusiasm for the next phase of CCI.

As can be seen with the enthusiastic turnout at the CCI Forum in Paraguay, the curriculum is showing the importance of educating the whole child, both their minds and hearts to secure the success of future generations.