Muslim Women in Peacebuilding Addressed at Capitol Hill Forum in the U.S. 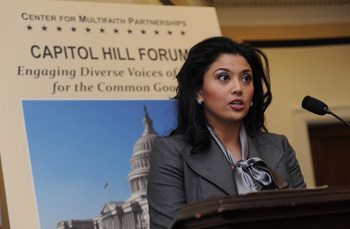 As part of the Capitol Hill forum on interfaith partnerships for peace, a special session was held to examine the role of Muslim women in peacebuilding.  Women, particularly women of faith are crucial players in securing and sustaining peace. Not only do they make up half of the world’s population, they are central members of the family, and the keystone of society. To that end, women should be supported and acknowledged for what they have and will contribute to society.

Here is the report of the session from www.globalpeace.org. 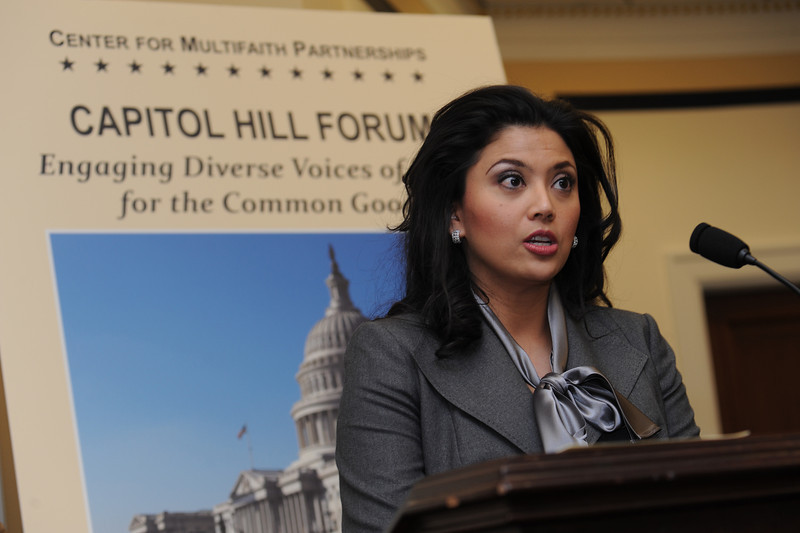 Dr. Rosa Rai Djalal, President of the Muslim Women’s Association, at a forum on Capitol Hill in Washington.

26-Mar-2013 |WASHINGTON—“Muslim women can and should play a significant role in ensuring peace in their communities and countries around the world,” said Dr. Rosa Rai Djalal, President of the Muslim Women’s Association, at a forum on Capitol Hill in Washington on March 20, 2013. “If women are not involved in the peace process, peace is unlikely to be sustainable. I strongly believe that women, both Muslim and non-Muslim, have unique a perspective that allow them to be catalysts for peace and nation-building.”

The forum, “Engaging Diverse Voices of Faith for the Common Good,” was hosted by the Center for Multifaith Partnerships, an initiative of the Global Peace Foundation.

“Recognition for the role of both Muslim and non-Muslim women in ensuring peace, justice and prosperity around the world has been growing,” Dr. Djalal told the forum. “In many parts of the world, Muslim women already play an important role in defending and promoting peace.”

She cited growing representation of women among recent Nobel laureates, notably 2003 Nobel Peace Prize winner Shirin Ebadi, the first Muslim woman chosen for the distinguished award. Championing the rights of women, children, and political prisoners in Iran, Dr. Ebadi has shown throughout her career that Islam, women’s rights and social justice are compatible.

In 2011, the Nobel Peace Prize was shared by three women, Tawakkol Karman, a 32-year old mother of three from Yemen, for defending and promoting human rights in her country; Liberian social worker Leymah Gbowee, who brought Christian and Muslim women together to form the Women for Liberia Mass Action for Peace, which played a pivotal role in ending Liberia’s 14-year civil war; and Ellen Johnson-Sirleaf, subsequently elected President of Liberia and Africa’s first ever female head of state.

Despite women’s capacity to foster peace, Dr. Djalal said, far too many Muslim and non-Muslim women are marginalized from peace-building efforts. “The question that we must address is how we can empower and increase opportunities for more Muslim women to take part in the peace-building process.”

“Much of the marginalization of Muslim women can be traced to a lack of education,” she said. “To the weak, the poor and the voiceless, education is a tremendous liberating force.

“We have consistently seen that when girls and women have the opportunity to empower themselves through education it not only benefits them, but it leads to a multiplier effect that benefits their families as well as their larger communities.

“The role that Muslim women play in fighting radicalism and terrorism is often overlooked, but it shouldn’t be underestimated,” Dr. Djalal added. “Indeed, Muslims believe that heaven is found at the soles of a mother’s feet. Thus, in the family, an educated and loving mother can be the most effective antidote for children who are at risk of [becoming radicalized]. . . . There can be no peace in the world without good loving mothers.”

“Indeed, Muslims believe that heaven is found at the soles of a mother’s feet.” ~Dr. Djalal Dr. Djalal said that universal suffrage and economic opportunity were also essential to empower Muslim women. Universal suffrage “naturally changes the political dynamics, and changes the political significance of women in Islamic societies. This is one of the most important reasons why Muslim-majority countries such as Bangladesh, Turkey, Indonesia and Pakistan, have elected women as Presidents and Prime Ministers.”

She said microfinance loans have transformed not only women borrowers, but also families and communities. “Entrepreneurship will be a key driver of change in the twenty-first century,” she said, “and it is critical that women–including Muslim women –do not miss this window of opportunity.”