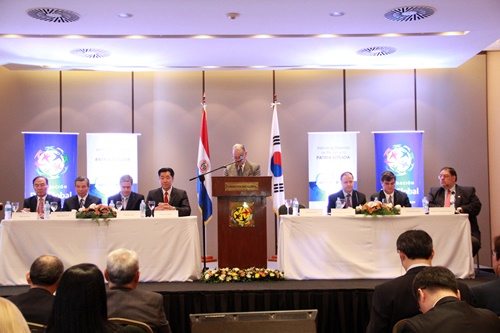 Business and government leaders at a symposium highlighting Korea’s development model for Paraguay.

Leading Korean government ministers and private sector leaders said Korea’s postwar model of development holds essential lessons for Paraguay, a nation, like Korea, in the shadow of large and powerful neighbors. Speakers from Korea and Paraguay addressed a landmark International Symposium, “Towards an Alliance between Paraguay and Korea,” in Asunción on June 17, 2014.

Welcoming government and business leaders and film and print media from Korea, Director of Paraguay Institute for Development of Thought Dr. Jose Altamirano encouraged Paraguayan leaders to learn from Korea’s example, a small nation that was devastated by war and crushing poverty, yet has risen in just 50 years to become a prosperous society and world economic power.

Dr. Altamirano noted favorable global economic factors for domestic growth but said, “We are tripping on the same stones. So many projects are left midway. With scarce resources, why not take advantage of a good example?” 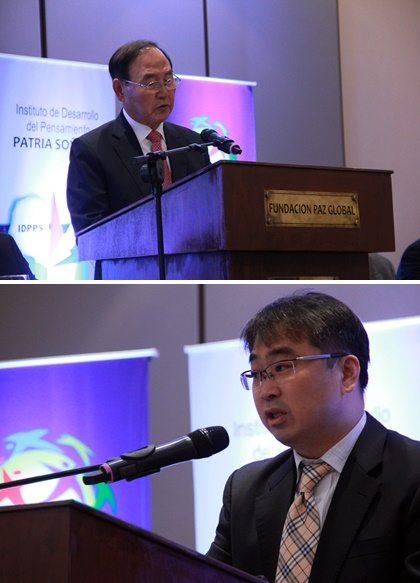 Hak Lae Son, former president of Korea Expressway Corporation and the Korea Rail Network Authority (above), and Cho Woo Hyun, former vice minister of Korea’s Ministry of Construction and Transportation, discuss the relevance of Korea’s experience to the development challenges of Paraguay.

Hak Lae Son, former president of Korea Expressway Corporation and the Korea Rail Network Authority, told the forum that with technology developed in Korea, engineers are not only constructing roads and railroads in Korea but in developing countries in Asia, Africa, and South America.

He said the 1968 highway project connecting Seoul, to Busan, Korea’s second largest city, was “a historical project that cost one fourth of the budget of Korean government at that time but has been a foundation for Korea’s economic development.”

Son said that the economy and technology for the highway construction project at that time was much inferior to that in Paraguay today, but it succeeded because of “the dedication of national attention and care.” He called the expansion of infrastructure such as roads, ports and railroads “essential for national competitiveness.”

Former vice minister of Korea’s Ministry of Construction and Transportation and chief of Incheon International Airport Cho Woo Hyun noted that Paraguay has one of the world’s largest hydroelectric power plants, as well as extensive lands for the development of agro and livestock industries.

But he also said it was essential to improve competitiveness by upgrading transportation capacity and reducing the costs of logistics. Expanding highways, railroads, and airport service, he noted, “will not only make all the territory of Paraguay a one-day life zone but also improve the efficiency of its economy and contribute to industrial development.”

The 1968 highway project connecting Seoul, to Busan, Korea’s second largest city, was “a historical project that cost one fourth of the budget of Korean government at that time but has been a foundation for Korea’s economic development.”

Carlos G. Fernández Valdovinos of the Central Bank of Paraguay presented a detailed analysis of challenges and opportunities facing Paraguay in the aftermath of the worst economic crisis in 80 years. Over the past decade, policy frameworks and economic fundamentals have been strengthened, he pointed out. “Government finances are sound, inflation is low, banks are strong, buffers are large, and a flexible exchange rate regime allows financial the sector to be prepared for external pressures.”

Carlos G. Fernández Valdovinos of the Central Bank of Paraguay (above)and José Molinas Vega, Paraguay’s Minister of Planning for Economic and Social Development, emphasize economic data that support a model for growth and development in Paraguay.

Mr. Valdovinos also noted recent statutory reforms in taxation and fiscal management. “Paraguay experienced eight consecutive years of fiscal surpluses,” he told the forum. “This had allowed the country to decrease its public external debt from more than 50 percent of GDP to less than 10 percent, the lowest percentage among peers.”

Mr. Vega moreover, presented realistic projections for development and noted that from 2003 to 2013 poverty had diminished by 50 percent. He argued that Paraguay can eliminate extreme poverty, increase life expectancy, reduce maternal and infant mortality, graduate 95 percent of Paraguay youth and elevate at least one university into world-class center of learning—all by the target date of 2030. Paraguay offers a young workforce, he said, quality raw materials, fertile soil, a strategic location, and cheap and abundant electric energy.

“We would like to use the advantages our workforce offers,” he concluded, “and for that, we are aware that we need to improve infrastructure. We need energy transmission lines, roads and waterways to connect with the world.”

Global Peace Foundation Chairman Dr. Hyun Jin Moon expressed his deep respect for Paraguay and his recognition of often unremarked internal qualities that can decisively shape a nation’s destiny. He explained how the Korea development model is an example for Paraguay.

“I have ridden with your cowboys, debated with your political and business leaders, and eaten together with humble families in the Chaco.  The more time I spend here, the more my heart is moved by your people. I am convinced that this country . . . has a unique role to play in this region, for this continent and the entire hemisphere.

“This region has abundant minerals and raw materials essential for industry and energy. The most important resource, however, lies with the great human potential of the Paraguayan people.  I observed the beauty of the Paraguayan people on the 2008 cattle drive across the Chaco.  Here, traditional and spiritual values, faith in God, and trust in family are still very much alive and a part of your people’s daily lives.  This is a key reason why this nation can become a model for national transformation. 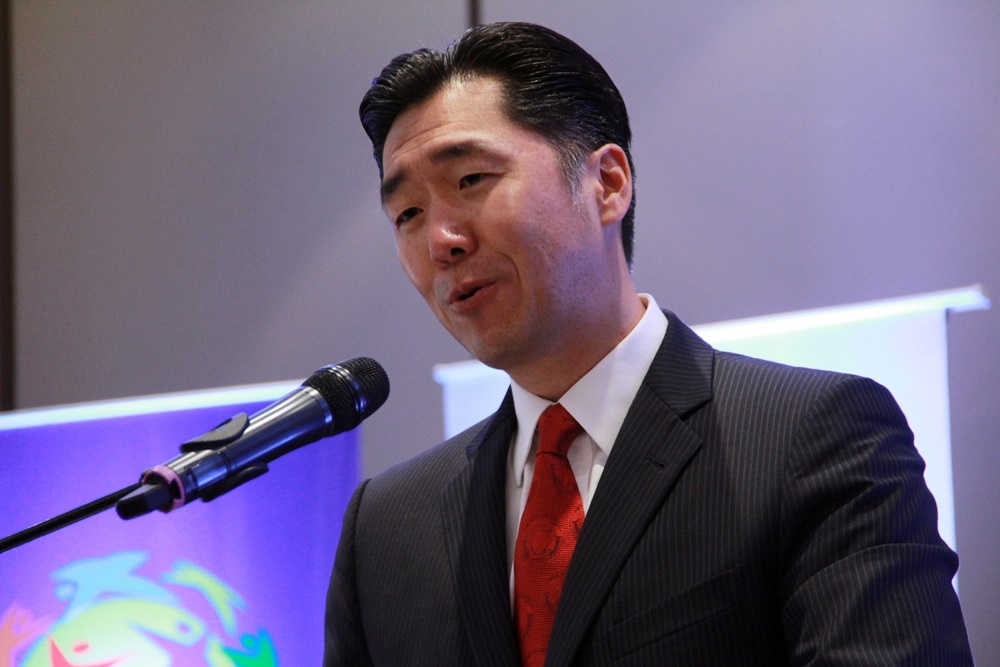 A clear national vision, rooted in fundamental spiritual principles and shared moral values, is the essential starting point for national transformation. A solid moral foundation is the basis for building a just society, which is the prerequisite for successful long-term economic growth.

“Paraguay can provide economic development and material prosperity to all its people without compromising the spiritual and moral traditions of this nation and its roots in strong family values.”

The International Symposium, “Towards an Alliance between Paraguay and Korea,” was hosted by the Institute for Development of Thought and Global Peace Foundation Paraguay.

Ground-breaking for a road construction project in Paraguay by the Korean Il Sung Construction company, the first Korea-Paraguay development initiative, is scheduled for June 18, and a railroad feasibility study by the Korea Rail Network Authority has been completed and presented to the Paraguayan Ministry of National Development and is under review.