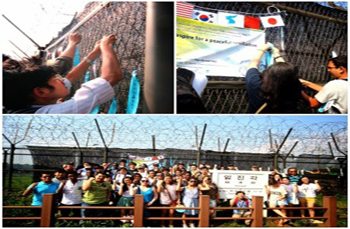 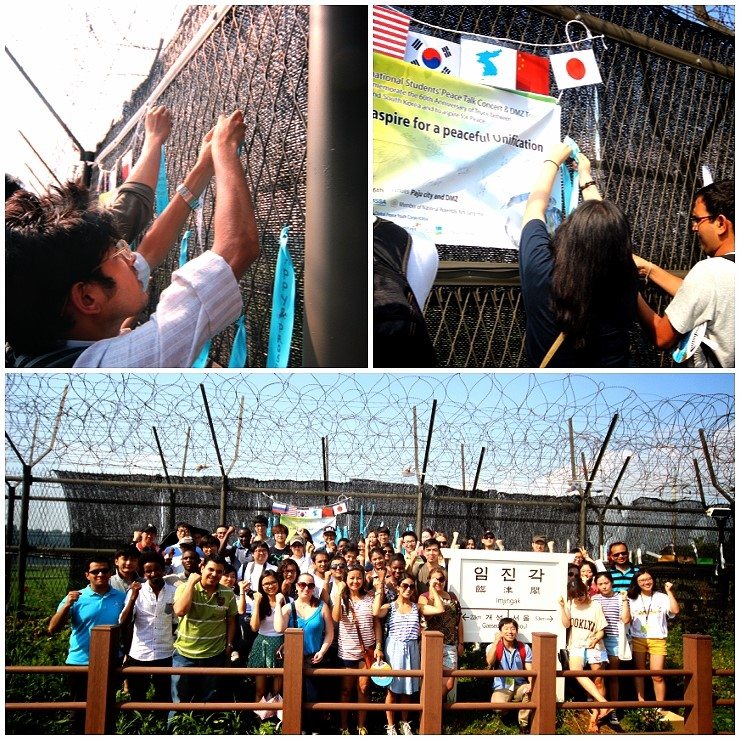 International and Korean students tie blue ribbons of hope on the barbed wire at Imjingak.

On July 26th, to commemorate the 60th anniversary of the Korean War Armistice, international university students from KISSA (Korean International Student Support Association) and Korean university students from the Global Peace Youth Corps spent the day exploring the issue of the reunification of the Korean Peninsula and its impact on global peace.

The Korean War was the first international conflict following World War II, and the beginning of the Cold War. To preserve the freedom of the Korean people, men and women from sixteen countries shed their blood, including the United States, United Kingdom, France, Belgium, Colombia, Philippines, Turkey, Ethiopia. But, peace did not come, instead a stalemate has endured since July 27, 1953.

At the “Dialogue and Concert for Peace on the Korean Peninsula” held at the Woongjung Happiness Center in Paju City, university students representing the six nations of the six-party talks: the United States, Russia, Japan, China, South Korea, and North Korea, articulated their positions regarding the problem of the Korean Peninsula.

Yoo Kyung Eui, Chairman of KISSA (President of the Global Peace Foundation Korea) and Saenuri Party Parliament member Kim Sangmin shared the podium to urge Korean and international university students to join forces for the reunification of the Korean Peninsula. They received a resounding applause.

The students representing the six countries placed their signatures on the unification pledge followed by other signers. Side by side, international students from KISSA and Korean students from GPYC wrote their hopes for unification on blue ribbons.

Despite the sweltering sun, the students traveled to the Demilitarized zone, the indelible scare that remains in the middle of the Korean Peninsula. Standing in the 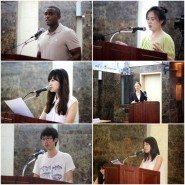 At Imjinkak, the students tied their blue ribbons to the barbed wire fence, leaving their prayers and wishes for  reunification.

The students representing the six countries rang the Liberty bell. They expressed their desire for not just the unification of the Korean Peninsula but for peace in North East Asia and the world. Daria Krutova, the Russian representative, read the Declaration of Peace that pledged solidarity among the Korean and international community, particularly through coordinated and consorted efforts among civil society, university and education for the realization of the dream of a unified Korea and the best interests of all people, North, South and the world.

The consensus among participants was that peaceful reunification is not just the hope of people living in Korea, but of people from around the world. Without peace on the Korean Peninsula peace cannot come to the world.