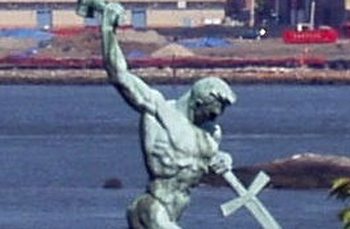 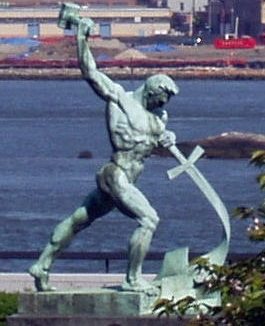 “They shall beat their swords into plowshares, and their spears into pruning hooks: nation shall not lift up sword against nation, neither shall they learn war any more. — Isaiah 2:3-4 This statue was a gift from the Soviet Union to the United Nations in 1959. (credit: Wikicommons)

September 21 is International Day of Peace. Citizens of the world are encouraged to observe a moment of silence at noon to pray for peace.

The International Day of Peace was established as a day of cease-fire and non-violence in 2001  with a unanimous vote at the General Assembly. Prior to that, the day of peace was commemorated on third Tuesday of September to coincide with the opening session of the United Nations General Assembly.

The 2013 focus is “Education for Peace”. A few months ago, Malala Yousafzai, a young Pakistani girl who almost lost her life while advocating for girl’s education, spoke at the United Nations. She said, “One teacher, one book, one pen, can change the world.” Yet the amount spent to fuel violent conflict increases, while, the UN reports aid for education has dropped for the first time in a decade.

It may be time to turn swords into plowshares by which we can learn to serve others instead of hate, time to turn in guns for pens, paper and books to cultivate the minds and hearts of the world’s children. Time to move beyond training just the mind with facts and figures to educating the heart and character. Time to raise a generation of moral and innovative leaders who are governed by their moral compass and inspired to make a significant contribution to their world.

The moment of silence at noon on September 21 is an opportunity to recognize humanity’s intrinsic connectedness as “One family under God,” and commit to upholding and protecting the value and dignity of every member of our human family. For at the heart of peace and harmony is the principle of living for the sake of others, the characteristics that connects us to the noblest characteristics of the human race.