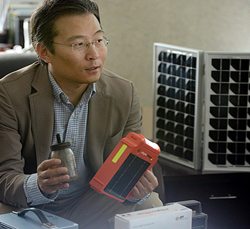 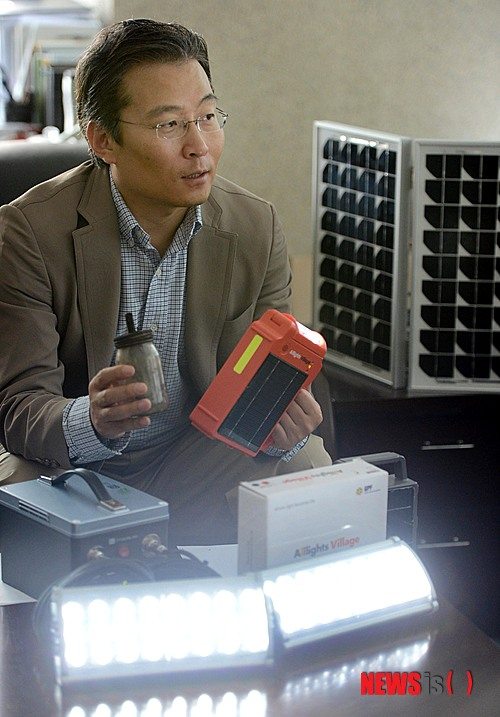 Early in September, President of Global Peace Foundation-Korea, Kyung Eui Yoo, sat down with NewsIs, a major Korean news outlet. He spoke about his numerous responsibilities as president of GPF-Korea, the International Boxing Federation and KISSA. And recounted how he began the All-Lights Village Project that has now reached Southeast Asia, Africa and Latin America.

Below is the unofficial translation.

GPF-Korea President Kyung Eui Yoo describes the “All-lights Village Project” as a movement to bring a “light of hope” through solar-powered, eco-friendly lanterns. NewsIs interviewed him at the GPF-Korea headquarters in Seoul. He told NewsIs people living in remote areas without access to electricity are being given vision and the confidence to dream again with these lights.

【Seoul=NewsIs】By Jae Gop Han = The United Nations Development Program (UNDP) states that proper lighting at night can increase productivity and household income by 30~50%. In 2007, the Millennium Development Goals reported that 15 million lives are lost to suffocation, burns and fires that result from the use of kerosene lamps.

1.9 million people in the global community currently do not have access to power at night. Global Peace Foundation Korea’s President Kyung Eui Yoo says, “The All-Lights Village Project’s eco-friendly, solar-powered lanterns  are allowing children to talk about their dreams and aspirations. The lanterns are a ‘light of hope’.”

For the duration of the 2 hour interview, President Kyung Eui Yoo spoke passionately about the ‘All-lights Village Project.’ He explained that the initiative services remote areas in the Philippine and other developing countries throughout the world.  It provides solar powered lanterns and solar powered streetlights. President Kyung Eui Yoo’s enthusiasm shows. It’s as if he lives for each moment when a light is delivered.

President Kyung Eui Yoo is also president of International Boxing Federation and KISSA (Korean International Student Services Association).  When we asked him which one is more important, he responded, “both.” In addition to describing the critical work of the Global Peace Foundation, President Yoo addressed the importance of sports such as boxing and the continued support of foreign students in Korea and the spread of Hanryu (Korean wave) phenomenon.

At GPF Korea’s office in Seoul, President Kyung Eui Yoo talked about the ‘All-lights Village Project’ and other GPF Korea programs that he is coordinating to distribute ‘lights of hope.’

-Please describe what GPF Korea is.

“Global Peace Foundation is a U.S.-based NGO chartered in 9 countries including Korea, the Philippines, Mongolia, and Paraguay. GPF Korea was founded in 2011. The GPF chapters across the world work organically to implement the projects of the Global Peace Foundation. GPF promotes the vision of ‘One family under God’ through three pillars of interreligious cooperation, strengthening families, and service for peace initiatives. We’ve proposed and implemented a wide range of innovative projects in consultation with experts in the fields that address the multiple challenges of our world.”

-What is GPF Korea’s main focus? 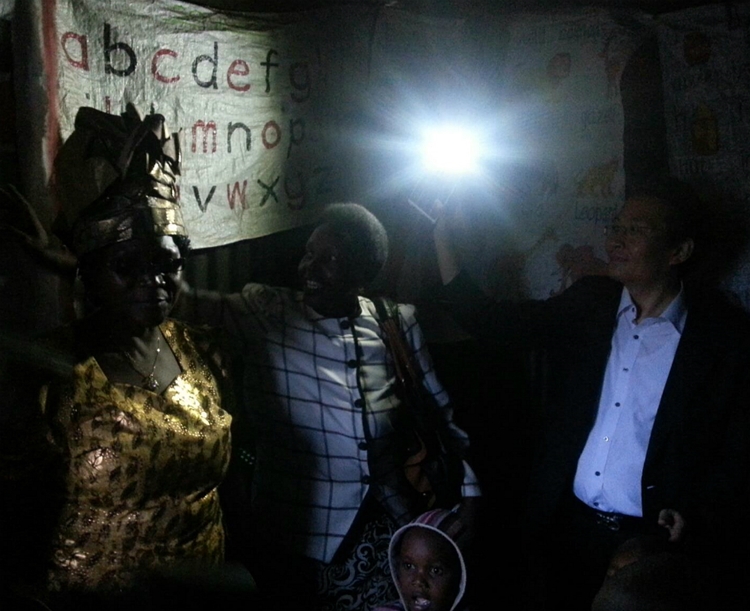 “Delivering lights through the ‘All-lights Village Project’.  We have other projects. For example, we helped establish a bakery plant in Hwanghae Province, North Korea to supply baked goods to school children. We kicked off the ‘Unification Donation Pledge,’ which is part of the Daily Unification Movement. The ‘Miracle of 1000 Won‘ is garnering attention, too. We also provide assistance and support to the wave of foreign students. We also are working on social development project that involve sports.”

– What is the ‘All-lights Village Project’?

“1.9 people in our global village spend their nights in darkness. By providing communities with eco-friendly solar powered lanterns and solar powered streetlights, we are brightening up their nights, enabling them to live better lives, and gain self-reliance.”

– What made you start ‘All-lights Village Project’?

“I visited Nairobi, Kenya in 2010. By 7 pm,  it was pitch black. I saw a young girl walking by herself down a dark street. The thought crossed my mind, ‘What if my sister was in that situation?’ And it saddened me. Soon after, I was introduced to the solar powered lanterns. I want to brighten up villages that don’t have access to electricity.

Our first project was in 2011. We sent 50 lanterns to Korean-Japanese schools that were hit by the tsunami and earthquake in Japan. It grew from there. We started sending lanterns to the villages in Kenya, Philippines, and Mongolia.”

-Where have the solar lanterns been most widely distributed?

“Recently I visited the Philippines for the fifteenth time. We are trying to deliver lights of hope to Bongabon in Nueva Ecija, Philippines, and other remote villages.   At my first visit, the local residents and the governor thought we were there for a one-time event. They didn’t give us any feedback. But we continued to visit and distribute solar powered lanterns and streetlights. Then, we started building community centers and chicken farms to help the residents become self-reliant. I think we made a positive impression. We’ve build up trust between us.”

-Can you describe what it’s like at one of these villages in the Philippines that have no power?

– I’m sure its difficult to promote children’s education without power.

“Lack of access to electricity is associated with many problems, high illiteracy rate and birth rate, and low productivity. It also has implications with education. Without light, even if the children want to study, they can’t. The kerosene lamps are dim, and the gas emission from the burning kerosene makes it hard to learn. The results are pretty obvious. Social mobility through education is hampered, and people are trapped in a vicious cycle of poverty. When we distributed the solar powered lanterns, children were able to hit the books even after dark. They’re talking now about their dreams and aspirations. I have experienced what it feels like to present ‘lights of hope’ to them.”

– Can you quantify the  impact the lamps have had on education?

“The test scores show proof. In the assessment administered by the Filipino authority, scores of All-Lights Village students have jumped 25%. Chris is a girl who lives in Luzon Island of the Philippines, where the 3rd All-lights Village is located. She wrote to us and said that she dreams of ranking first in the nation and become a doctor. A practicing doctor just became her mentor and is helping her achieve that dream. Chris says Salamat Po! (‘Thank you’ in Tagalog).  She thinks the solar powered lanterns are the greatest gift.

The Philippine state government has promised to dispatch teachers to All-lights Villages on a regular basis. Cardinal Rosales, emeritus Archbishop of Manila has endorsed All-Lights Village. The solar powered lanterns have had a positive impact on the local residents. It’s increase their quality of life.”

– Is there anything else that ‘All-lights Village Project’ is addressing?

“Once, I met a resident who walked 8 hours from the mountains to receive a solar powered lantern.   I felt, “We have to work on improving the quality of the lamps.” I realized that residents in these remote areas do not have TVs or radios. They do not have access to any form of technological communication, whatsoever. For that reason, we ask that the company develop lanterns with radios. The locals love it.

Our intention is to have residents use their solar-powered lanterns every day for a long time. I want to point out that we are not simply giving them the lanterns. When they are interested, we help them become self-reliant. Many underdeveloped countries, despite continuous support, lack the ability and determination to stand on their feet. They are trapped in poverty. The ‘All-lights Village Project’ looks for villages that are determined to become self-reliant. We want to join forces and support such people to create new families, new villages, and new communities.”

– Lack of power may not be the only problem.

“That is right. There are many challenges to living in these remote areas. Lack of power is just one. Another problem is access to clean water. In most of these villages, their only source of water is contaminated. Hankyung University has recently created and started installing water purifiers that dispense clean and clear water without fancy mechanisms.  These water purifiers are cost-efficient.  We also are working with partners to establish models of economic independence. Recently we set up chicken farms and opened a water buffalo rental center. ”

“Not only individuals, agencies and corporations are taking a greater interest. In fact, the number of institutions taking part in these service projects is increasing. Last May, seven employees from the Korea Securities Depository volunteered in Tamale Village, the 11th All-lights Village in the Philippines. They distributed solar powered lanterns and installed streetlights in the village. We also built community centers. We thought an assembly hall would support village development. The employees of Korea Securities Depository who participated in the project said they were happier seeing the solar powered streetlights installed than they were seeing the Naroho satellite launched. For them, it was more than just volunteering, it was felt like a real humanitarian deed. I hope more individuals and institutions get engaged.”

– You must be busy as IBF Asia President and KISSA President.

“I am interested in sports. That includes boxing, especially North Korean boxing. I hope boxing can help achieve peace and reunification. To me, boxing is a sport played under fair conditions in a four cornered ring. I think it’s an excellent place for youth education. I wish more schools would open  after-school boxing programs. The IBF World Assembly will be held in Wonju, Kangwon Province in 2015. 400 boxing educators from 50 nations will attend. I hope this can promote boxing in Korea.

KISSA was inaugurated in 2005. It has given foreign students in Korea a place to belong and has advocated for their rights. The number of foreign students is rising, but there are a lot of problems because of the universities’ lack of stewardship.  I’ve seen students end up as illegal residents; other students have developed anti-Korea sentiments. There is a lack of management and support to help these students acclimate to Korean culture. KISSA plans to operate an online information center, host regular sports festivals for foreign students, and hold hearings to further awareness and advocacy for the rights and interests of foreign students.”

-What is your dream President Kyung Eui Yoo?

“It is so rewarding and wonderful to be able to give eco-friendly lanterns to the dark villages, help them drink clean water, and create an economic development models to give them self-determination and self-reliance. But that shouldn’t be the end of it. As I witness the changes in these villages, I have realized that reconstructing developing nations can only happen when national leaders take part in initiatives like the All-Lights Village Project. I want to create and spread models of global peace initiatives that are undertaken with moral authority. I want to show the motto, “A global village is one family”. . Such peace movements and grassroots national movements for unification will  contribute to the eventual reunification of Korean people.” 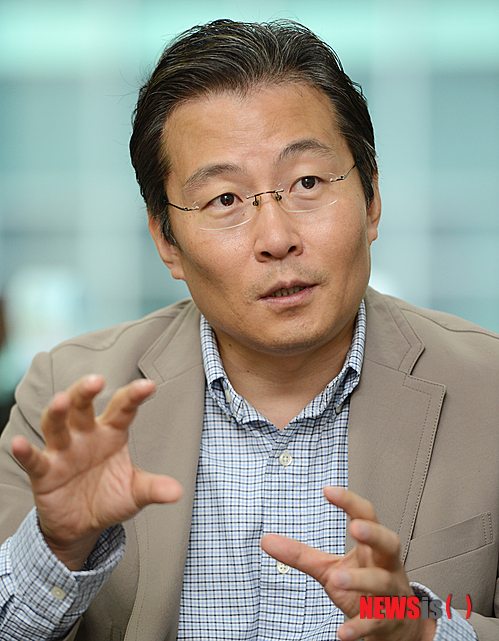 ▲   Graduated from Columbia University with MBA

▲   Received Medal of Merit of Malaysia