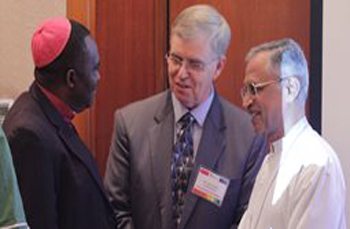 KUALA LUMPUR—The 2013 Global Peace Convention kicked off in Kuala Lumpur on December 6 with a call from GPF chairman Dr. Hyun Jin Moon for the establishment of a faith-based Peace Council at the United Nations as a major initiative to meet the global challenge of identity-based conflict. 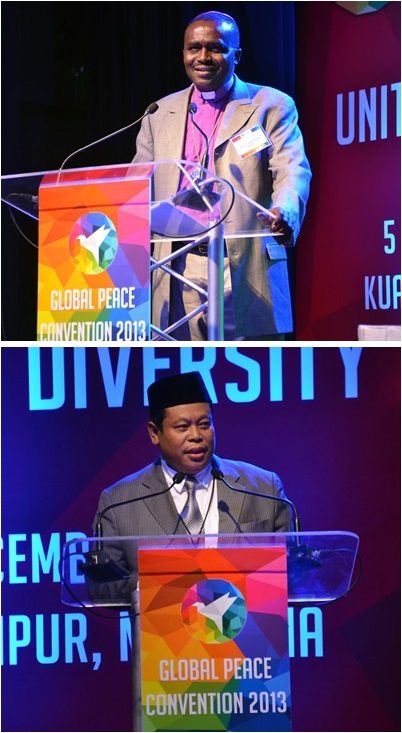 “Today, religious identities are regional in scope and appeal, spreading far beyond national boundaries,” he explained. That is something the existing UN is not well equipped to deal with and that a religious peace council could remedy.”

The Peace Council was part of a broader proposal for creating an international movement of interfaith cooperation to counter the threat of conflict on a global scale instigated by radical politicized versions of faith traditions. “The universal principles and shared values expressed in the world’s faith traditions … offer the antidote to the threat of global religious war,” Dr. Moon said.

The Convention opening addressed the three-day convention theme: “Unity in Diversity: Building Social Cohesion for Sustainable Peace through Universal Aspirations, Principles, and Values.” Participants from more than 40 nations observed a moment of silence for the passing of Nelson Mandela a few hours earlier while speakers reflected on the impact of his life which reached far beyond the usual boundaries of politics to embrace former enemies. Dr. Manu Chandaria called him “the heart of Africa” and said the continent was “poorer today without him.”

The Convention was greeted on behalf of Malaysian Prime Minister Najib, by Tan Sri Joseph Kurup, Minister of the Department of National Unity and Integration, which co-hosted the event. “Diversity is a big part of Malaysia’s DNA,” he said, quoting Prime Minister Najib. He called diversity a “blessing not a curse” and said that Malaysians were bound together by respect for their differences.

“The universal principles and shared values expressed in the world’s faith traditions … offer the antidote to the threat of global religious war.”

At the same time, he acknowledged that this idyllic picture was threatened by the unpredictability of politics. Religious bigotry and political name calling threatened the fabric of respect. He singled out the use of social media in particular to sow resentment and spread religious hatred.

“We have a moral responsibility to preserve our unity for future generations,” he concluded. “If we play politics with our future we will destroy what we have built.”

Former president Vinicio Cerezo of Guatemala (1986-91) and the first democratically elected president after 36 years of military dictatorship recounted the course to bring peace and democracy to his country and then peace to the Central American region. Wanting to strengthen the roots of democracy in the region led him into partnership with the Global Peace Foundation.

Out of the relationship the Latin American Presidential Mission has emerged, now comprising 20 former presidents from the region. They work to strengthen democratic principles and practices and to forge better relations with the United States.

Dr. Manu Chandaria, chairman and CEO of the Comcraft group highlighted the problems facing young people in Africa. He said that five million young people in Kenya with college or high school education cannot find jobs and commended GPF for providing a platform that nurtures a culture of service and volunteerism through initiatives such as the Africa Peace Service Corps.

He noted that Africa was rich in resources – in land, minerals, and, most of all, human resources. There were many hard-working people, yet a country like Kenya, which 50 years ago had a GDP similar to Malaysia, had now been left far behind. “What Africa lacks,” he said, “was transformative leadership.”

Hajiya Mrs. Amina Sambo, wife of the Nigerian vice-president and founder of the NGO I Care – Women and Youth Initiative, is the patron of the recently established Nigeria chapter of Global Peace Women. She said she had been inspired to partner with the Global Peace Foundation by Surah 49:13 in the Qu’ran that says “we have made you nations and tribes so that you may know one another.”

Sen. Samaniego noted the emerging role of women in leadership, “unimaginable in earlier generations but now becoming a reality,” and she urged that women who do assume leadership will send a message of tolerance and respect that must begin within the family.

“We can talk about shared values among those who are prosperous but we must not forget those who are marginalized, people who live on contaminated lands, who drink polluted water.”

Dr. Syuhud said unity in diversity was not simply an abstract idea in Indonesia but a principle of Indonesian nationhood. With thousands of islands, 737 local languages, and every major faith tradition, religious and cultural diversity is “a grace bestowed by God” and that NU was taking on “a singular role of promoting tolerance and respect for differences.” He outlined many steps that were mandated in Quranic teaching that positively affirm the diversity of human culture, tradition and faith as an means to “know one another.”

Bishop Onuoha spoke briefly but delivered a poignant film message on the deep respect religious leaders are held in Nigeria and the important ways in which Christians and Muslims in the nation of 170 million are collaborating in the fight against the real enemy—the mosquito, the spreader of malaria.

Tan Sri Razali Ismail said it was inspiring to hear about the human quest for peace and unity amidst diversity. “But when dealing with the reality of how things really are we come up against some difficult problems,” he added. “Economic theories and good intentions have not been able to reach many still living in abject policy and repressed by political violence. Is there compassion enough in national policy to deal with marginalized?

He said the criminal underworld was more sophisticated is Southeast Asia than anywhere, with human trafficking and other forms of oppression flourishing. “You think it is a Hollywood movie, but it is not,” he told participants. “We can talk about shared values among those who are prosperous but we must not forget those who are marginalized, people who live on contaminated lands, who drink polluted water.”

He concluded with an appeal for more committed and higher caliber leadership. Dependence on government is clearly not enough, he said, and it was time to agitate “from the bottom up” for reform and effective solutions to bring medicines and other necessities to the world’s marginalized.

The Global Peace Convention concludes on December 7 with an Awards Gala recognizing leaders who have contributed to peace, interfaith cooperation, and human development.