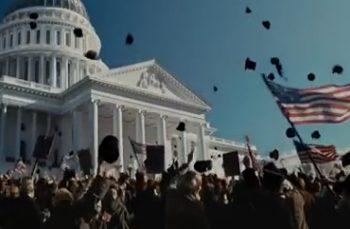 The opening scene of Spielberg’s 2012 film Lincoln, appropriately opens with a recitation of the Gettysburg Address. Most Americans are asked to read the Gettysburg Address sometime during their school career. Rhetoricians have studied and marveled at why his short oratory has lived through centuries as one of America’s greatest speeches. Some say it was because it was mercifully short. Speeches in those days ran for hours, the Gettysburg was 15 minutes long. Others note its poetic rhythm, masterfully applied rhetoric devices and language. But of course it is the message, the powerful vision coupled with the 16th President’s skilled oratory that make the words resound in the soul.

The movie opens right before the battle of Wilmington where Lincoln is speaking to two black soldiers, asking them about their lives as free men and soldiers. They are interrupted by two young white soldiers who are estatic to see President Lincoln. They explain that the Gettysburg Address, is what convinced them to take arms and begin to recite the speech.

“Four score and seven years ago our fathers brought forth upon this continent, a new nation, conceived in liberty, and dedicated to the proposition that all men are created equal.

Now we are engaged in a great civil war, testing whether that nation, or any nation so conceived and so dedicated, can long endure. We are met on a great battlefield of that war. We have come to dedicate a portion of that field, as a final resting place for those who here gave their lives that this nation might live. It is altogether fitting and proper that we should do this.

But in a larger sense, we cannot dedicate – we cannot consecrate – we cannot hallow – this ground. The brave men, living and dead, who struggled here, have consecrated it, far above our poor power to add or detract. The world will little note, nor long remember what we say here, but it can never forget what they did here. It is for us, the living, rather to be dedicated here to the unfinished work which they who fought here have thus far so nobly advanced.  It is rather for us to be here dedicated to the great task remaining before us – that from these honored dead we take increased devotion to that cause for which they gave the last full measure of devotion.”

They are called away to join their company, leaving the last passage unsaid, but one of the Negro soldiers completes the recitation. As the words fall from his lips, Lincoln’s commitment and the promise of freedom comes alive.

“That we here highly resolve that these dead shall not have died in vain – that this nation, under God, shall have a new birth of freedom – and that government of the people, by the people for the people shall not perish from this earth.”

150 years, and still the world is working to secure this promise of not just for one nation, but all humanity.