Dream of a Better Malaysia 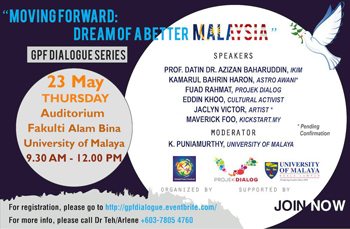 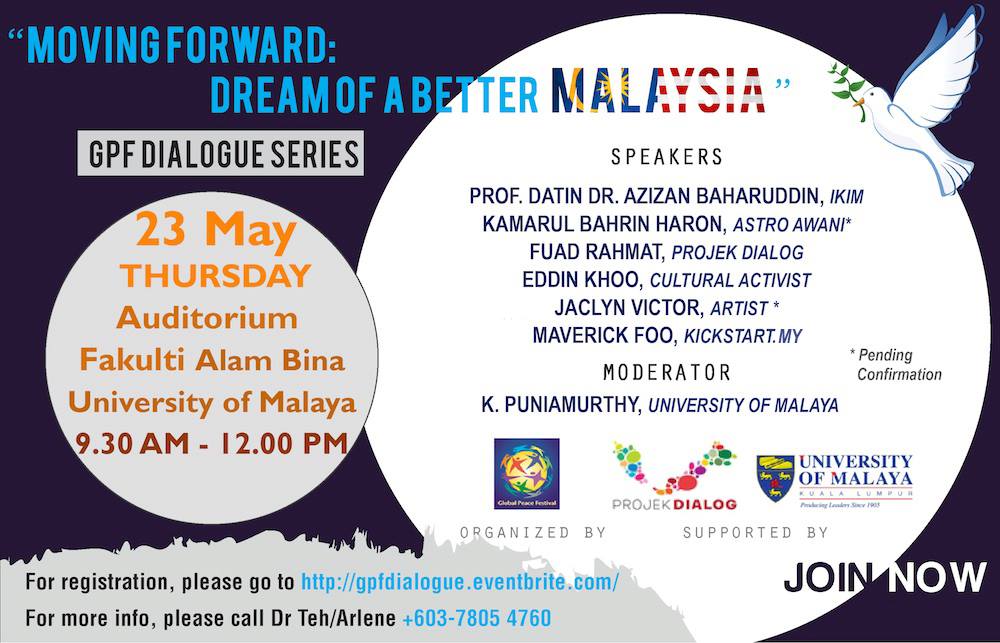 Forum hosted on May 22 to examine the way forward in Malaysia.

Malaysia’s most recent elections brought to the surface ethnic tensions that have been simmering over the past decade. It is an opportunity for Malaysians to regroup and reaffirm the values and aspirations that they share as one nation, while addressing the shortcomings and best practices of the past 50 years.

Global Peace Foundation (GPF) is on the cusp of this dialogue. On May 23, co-sponsors, GPF, Projek Dialogue and the University of Malaya are hosting a forum entitled, “Moving Forward, Dream of a Better Malaysia.”

GPF brings a wealth of experience of building social-cohesion and development based on shared values and the vision that we are all one family under God. It has run programs and initiatives in regions around the world. GPF was pivotal in ensuring a peaceful election in Kenya in March. It is also a central force in promoting good governance and transparency in Latin America.

Prime Minister Najib recognized the growing unrest in his opening address at the Asia 21 Young Leaders Summit in 2009. “In recent decades, however, the forces unleashed by our ethnic mix have grown stronger. Our communities seem to have grown apart.”

The Center for Public Policy Study released a factsheet on National Unity in 2008 that reflected growing discontent among Malays on the equity of economic policies. Also, Chinese and Indians rated religious harmony comparatively lower than Malays.  While accepting of other religious traditions, Malaysia is officially an Islamic state. Chinese, who are traditionally Buddhist and Indians, who are Hindu, make up the religious minority.

Prime Minister Najib continues, “Our diversity must be a blessing, if it is not to be a curse.”

Yet, “unity in diversity” is something that the Malay Peninsula has fostered for thousands of years. It has been the hub of trade between the Middle East, South and East Asia, and even Africa. Unity was found through “travel, trade, and exchange rather than conquest of conflict.”

This legacy enabled Malaysia to emerge stronger and more united after the riots in 1969 broke out after the national elections between Malays and Chinese. The Department of National Unity was established to “watch the state of ethnic relations in Malaysia” and “foster unity and integration,” and the Rukengara, or National Ideology was created. The principles of Rukenegara outline the common principles of Malaysia’s morality and ethics. They are: faith in God, loyalty to king and country, upholding the constitution, the rule of law, and good behavior and morality.

By first defining common ethnics and values as a nation, Malaysia has fostered social-cohesion and a national identity that incorporates ethnic and religious differences. Second, it has poured in resources into the education system, which has been the primary means by which these shared values and ethics have been imparted to each generation of Malaysians.

The National Philosophy of Education (Falsafah Pendidikan Negara) states, “Education in Malaysia is an on-going effect towards further developing the potential of individuals in a holistic and integrated manner, so as to produce individuals who are intellectually, spiritually, emotionally, and physically balanced and harmonic, based on a firm belief in and devotion to God.”

Furthermore, efforts like Wawasan 2020 (Vision 2020), the goal to make Malaysia a developed nation by 2020, 1Malaysia, and recent education and economic reform, are also aimed at forming shared national goals and integrated development efforts.

A study by Dr. Fakhri R. Khader, Chairman of the Department of Educational Sciences at Petra University proposing to adopt certain practices from Malaysia’s moral and civic education, observes that Malaysia’s curricula aspires for utmost unity with each community as a foundation of sustaining democracy, securing social justice, and guaranteeing the freedom of religious and cultural beliefs.

This is a great moment for Malaysians to seize. They can carry forward the work-in-progress to define a common vision that binds them as one nation and continue to be an example of “unity in diversity” for the world.