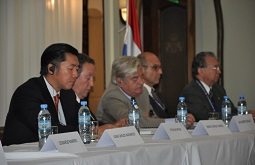 Dr. Moon spoke at a media conference jointly sponsored by the Global Peace Festival Foundation, the Paraguayan think-tank, “Patria Sonada,” the United Press International (UPI), and the hemispheric media organization, CERTAL. It was also supported by the National Leadership Conference of Uruguay and the Esquipulas Foundation of Guatemala.  Owners of media outlets, reporters, editors and government officials committed to promoting freedom of press and responsible media gathered in Paraguay.

This year the UN and UNESCO highlighted the role of new media platforms during World Press Freedom Day early in March with its theme, “New Voices: Media Freedom Helping Transform Societies.”  Media, including all the new forms of social media, are, indeed, an important part of society.

The following is an excerpt of Dr. Moon’s speech given during the symposium.

“Freedom, the Press and Courage: Strengthening Democracy through Ethics and Responsibility.” 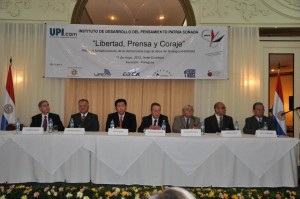 Given the tremendous influence in the age of the Internet, social media, and the 24-hour news cycle, the media have an increasing social responsibility to citizens at large, much like teachers and mentors of past generations.  The Internet and social media have presented many exciting opportunities that have transformed education, society, and governments.

It has brought to point the vital role of free press in creating effective and just societies. Self-governing nations need well informed, self-governing citizens and institutions. To that end the press should remain free to inform. It cannot be controlled or limited by special interests. However, we must not forget that with freedom comes responsibility. When responsibility is ignored, freedom dissolves into license, which solicits constraints for order.

We recognized the grave responsibility we carry as media owners, editors and reporters. Media is a primary source of information for citizens. This is challenging in a rapidly changing and often confusing world. To that end, media can provide perspective and insights to the people. Moreover, it has powerful influence over the attitudes, values and priorities of its societies.  A prime example is the influence of entertainment media in shaping the aspirations and life goals of the youth. We must recognize that media can sustain or undermine effective citizenry.

Those gathered at the conference know from first-hand experience daily challenges of simultaneously maintaining a bottom line and integrity. But, we also acknowledge the higher vision and moral responsibility of the profession.

We are committed to finding ways to solve the practical, everyday problems facing media, while never losing sight of the guiding moral vision for each of our communities, countries, and regions. 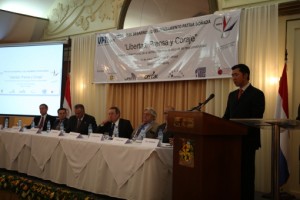 Dr. Moon’s address at the conference on the importance of free press, and the responsibility that media has in developing and sustaining just societies as well as defining the cultural values and priorities of those societies.

We live in a time of rapid and historic change. This transition carries great promise of prosperity and peace. However, it also brings continuing challenges: growing economic and social divides, political and social instability, economic uncertainty and amplified ethnic, cultural and religious clashes.

There has been progress. Organizations like the United Nations have promoted greater cooperation and diplomacy between nation states towards peace and economic development. Tremendous scientific discoveries have reduced disease and improve communication. International legislation has articulated human rights and freedoms. However, we must recognize that the most fundamental human problems cannot be solved by politics, diplomacy, economics, or science alone.

Sustainable solutions must ultimately include the intrinsic spiritual dimension of the human experience. Simply put, political authority cannot mandate, nor can money buy, the virtues needed to resolve conflicts and build ethical societies.

Compassion, respect for others, empathy, forgiveness, integrity and other virtuous qualities essential for peace are motivated by the human heart and spirit. This innate spirituality is an essential part of every person’s life and the basis of fundamental truths— universal principles and values that all people acknowledge regardless of their particular religion or culture.  These are the same immutable principles and laws which govern the natural universe and the foundation for a just, ethical and peaceful world.

More than ever, we need to seek to understand these universal principles and values that form a shared spiritual vision for humanity. Yet, to discover this place of consensus, each of us needs to delve deep within our own hearts and spirits, and to venture beyond the lines that divide us to discover humanity’s common spiritual heritage. This is the place from which we can begin to work as one family.

Moral and Innovative Leadership in Media 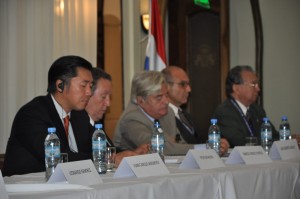 The panel of distinguished media and political leaders. Substantive progress was made to address the challenges and responsibilities of media, particularly in the American hemisphere.

Media in today’s world face daunting challenges, especially here in Central and Latin America. They have the responsibility to provide to their viewers, listeners, and readers with information and insights about a rapidly changing, often confusing world. At the same time they face many pressures: from authoritarian governments that would constrain press freedom; from corporate interests that often own media companies or use their wealth to influence them; from criminal cartels that are ready to exact the ultimate price from courageous journalists; and from technological change through the internet and the global growth of social media.

In times of great change, the path to peace and prosperity requires vision and principles that point our direction, and leadership that takes us there. I have often stressed that the leadership we need in our societies today has two aspects. It has to be moral, and it has to be innovative.

Moral leadership is guided by the shared principles and values that manifest in the noble qualities of human nature. It does not reflect any self-serving personal or political interests but benefits “the greater good” of humanity, and affirms the intrinsic value of every person, regardless of ethnicity, nation of origin, or station in life.

When we live in accordance with universal laws and in harmony with the natural world, we can best tap the resourceful energy of human creativity.  Innovative leadership focuses that energy to find new and inventive approaches to solve problems and create new opportunities.

There are many examples of countries whose development have been crippled by corrupt political leadership. I want to point out that moral and innovative leadership is not only needed in government and politics. It is needed in every major institution and organization within society, including, and perhaps especially, in media.

Drawing upon the resources of innovative leadership, you must find ways to solve the practical, everyday problems facing media, while never losing sight of a greater moral vision for your communities, countries, and region. The internet and social media offer exciting new possibilities.

Times of great change bring both threats and opportunities. To meet them, we have to think beyond old ways. We must grasp a new vision for the future, and develop a new spirit of leadership that can match the demands of this emerging new era, steering it away from the shoals of conflict and decline, toward a world of peace and prosperity for all people, everywhere.

I urge you all to join with me in this endeavor, and work in your respective fields to secure that bright future for Paraguay, and all of your nations, throughout the region and this hemisphere.

As journalists, editors, and especially owners of media outlets, you wield great influence over the cultural formation and moral direction of your societies. I urge you all to exercise that influence with a strong sense of moral leadership, guided by a vision of the type of society in which you would like your grandchildren and great-grandchildren to live.

Role and Responsibility of Media

For a society to be robust, cohesive, and prosperous, it must embody universal principles and values and pass them on to subsequent generations through a clear cultural paradigm.  That culture cannot simply be an arena for competing interests to struggle for their own narrow ends.   Rather its component parts should manifest the virtues it is attempting to nurture, fostering a purposeful organic entity which strives to align to its principles and values. 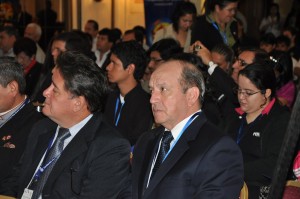 Participants included media outlet owners, editors and reporters. Each person brought their insight and experience to the table as we discussed the issues and responsibilities of the media.

Media play an essential role in engaging the citizenry through the two main venues of information and entertainment. News media, in both hard and soft formats, inform us about what is going on, how to understand current events, and what are society’s  most pressing issues. Entertainment media, on the other hand, reflect societal interests and thus convey trends, attitudes and popular culture.

The media have an increasing social responsibility to citizens at large.  The American founders understood that the republic they were creating could not survive without citizens who are informed, and virtuous, or ‘self-governing.’ Media have a huge role in sustaining, or eroding, that kind of citizenry.

Press freedom is vital for a well informed and functioning society. No special interests, whether public or private, should be allowed to control or curtail the free press to advance their own narrow interests at the expense of the whole. But freedom has to be properly understood. It comes with a significant responsibility.

I know that the daily challenges you face as media owners, editors and reporters, are great, not least of them being the bottom line. But I urge you not to lose sight of this higher vision of moral responsibility and accountability for your profession. In this current economic crisis, we saw how the self-interested actions of certain global financial actors crippled the entire global economy. In the same way, an irresponsible, self-interested media which abandons its moral and social responsibilities could cause even greater harm by affecting not only the economic but social, political, ethical, and diplomatic fabric of any nation and region in the world.

Let us not forget that the role of media is paramount in aligning the citizenry to the virtues and aspirations of society as a whole through responsible and accountable reporting, opinions and entertainment.