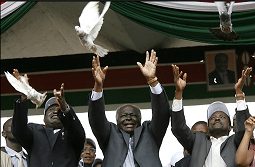 It is a special honor to address you here at the opening of this historical and unprecedented National Youth Summit. In 2008, I was pleased to stand together with Prime Minister Raila Odinga on the stage outside this international convention center at the first Global Peace Festival, held in the wake of the tragic post-election violence. There we pledged, with all those present, that such a thing would never happen in Kenya again. And together we declared a profound and powerful vision that can unify Kenya, Africa, and the world, the vision that we are One Family under God, regardless of race, tribe, nationality or religion.

We declared a profound and powerful vision that can unify Kenya, Africa, and the world, the vision that we are One Family under God, regardless of race, tribe, nationality or religion.Since that time the Global Peace Foundation has been engaged in a dynamic partnership with both the leaders and the youth of Kenya as the country experiences a new birth and revival under the new Constitution. In 2010, the 2nd annual Global Peace Convention and International Young Leaders Assembly was held here at the KICC in partnership with the Kenyan government under the patronage of His Excellency President Mwai Kibaki.

At that time, I said that we were entering an era when Africans could lead in ways unimagined before; that this could be a new decade of African leadership, from local communities, to the national halls of government and on to the four regional corners of Africa. The time is ripe for a new breed of leaders to emerge, practicing moral and innovative leadership that is motivated by a common vision rooted in universal principles and shared moral values. If you and other young people like you can become such leaders, you will shape the future of Kenya and of this great continent of Africa in productive and inspiring ways.

This is a time of great opportunity for Africa, and for all the developing countries of the southern hemisphere. Today the developed nations of the northern hemisphere are facing serious economic, social, and political challenges in the wake of the global financial crisis, which has left the countries of the South, such as Kenya, relatively untouched.To a great extent, these problems arose from the erosion of the principles and values that underpin democracy and the free market system and make them work. For example, most people now recognize the role in the financial crisis of large financial institutions whose leaders often pursued profits selfishly, without any regard for the damaging consequences they inflicted on the wider society.Kenya and the nations of Africa can learn from these mistakes and take a different path, one that will guarantee future peace and prosperity.

The key to grasping this opportunity is leadership that understands the central importance of universal principles, and that practices the moral values that flow from them.Already Kenya is leading the way here, through your historic new Constitution that recognizes the sovereignty of God as the source of all fundamental human rights, freedoms, and responsibilities. This provides the foundation and framework for the character and enterprise of the Kenyan people to flourish in building peace and prosperity, while setting a precedent for the rest of Africa.

Africa is rich in both material and human resources. Up to now, the exploitation of the material resources has held center stage, often at the expense of the African people as a result of conflict and corruption. Now is the time for Africans to take charge of their own destiny by cultivating your human resources, and in particular the qualities of moral and innovative leadership at every level of society.

Let me explain what I mean by moral and innovative leadership. Moral leadership provides the roadmap for nation building by outlining a vision rooted in universal aspirations, principles and values that have the breadth and depth to encompass the diversity of the human family. That vision, that we are all members of One Family under God, has the power to transcend the tribal animosities that spawned the 2008 post-election violence, as well as national, cultural and religious differences. 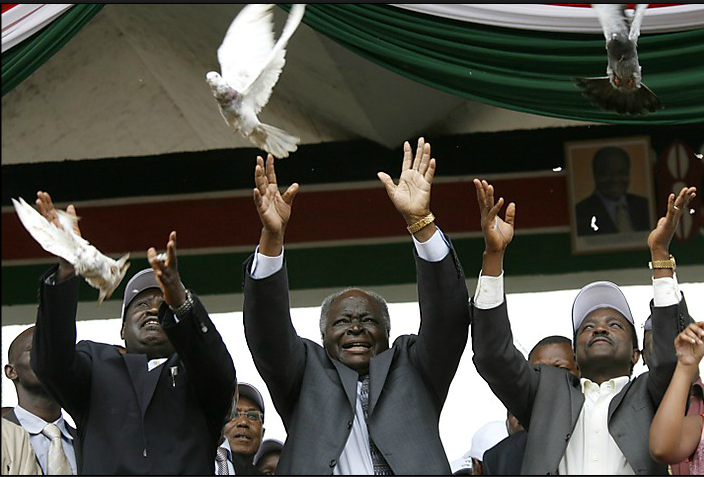 Thus, the moral leader is one who serves a greater good, putting the nation before tribe or selfish interests. Such leadership is the key to the good governance needed for African enterprise to flourish and create prosperity. It is also the antidote to the corruption that has so often plagued development.

Innovative leadership means harnessing our God-given creativity and ingenuity through projects great and small at every level of society to advance this vision. It means encouraging a culture of enterprise and self-reliance, ownership and responsibility. Through this the people of Africa can pioneer their own destiny, avoiding a culture of dependence which is sometimes the unintended result of large-scale aid programs.

You young leaders here today have already shown your determination to pull yourselves up by your own bootstraps through encouraging social entrepreneurship, volunteerism and community-based development, and programs that cultivate the character, creativity, and leadership of young Kenyans. GPF has been pleased to support these programs with tireless young leaders together with the Brand Kenya Board, Ministry of Youth Affairs and Sports and the Ministry of Education.

As a spiritual peace movement, GPF is unique in highlighting the fundamental importance of principles and values for peace and development. Through our projects and partnerships, we are leading the way in promoting the qualities of character that form moral and innovative leaders, especially among young people such as you, the leaders of tomorrow. All the initiatives we are engaged in empower the spirit of altruistic responsibility and sense of ownership for the nation.

For example, the GPF Character and Creativity Initiative, in partnership with the Ministry of Education, is engaging students with teachers, parents, and community leaders, in a program that develops good character, creativity and leadership qualities, in schools across the nation. The research institute KIPPRA has found in those schools both academics and discipline improved, lifting the whole school culture.

Earlier this year the Ministry of Education announced that henceforward schools would be evaluated not only on academic performance but also on the character and creativity of its students. This makes Kenya a pioneer in recognizing that the moral qualities of students are as important for the country’s future as their intellectual abilities.

In the Rift Valley, GPF worked in partnership with Peace Cops, Brand Kenya and MOYAS after the post-election violence, to support young people from different tribes who took the responsibility to cooperate together to prevent future violence in places like Molo and Kuresoi. Our regional chairman Dr. Manu Chandaria also rebuilt Rift Valley schools—Mutate and Sasamua—that were burnt after the post-election violence, working with Kenyans and international volunteers.

International cooperation at a grassroots and community level is also important in expanding horizons and possibilities in the minds of young people in Africa. The All Lights Village Project from Korea is providing solar-powered lamps to villages in Molo and parts of Nairobi that are off the electrical grid. As a result, children in those villages can now study safely after dark. The lamps are delivered by Korean students who work together with the local youths on projects the community needs, uniting hands and hearts across continents. 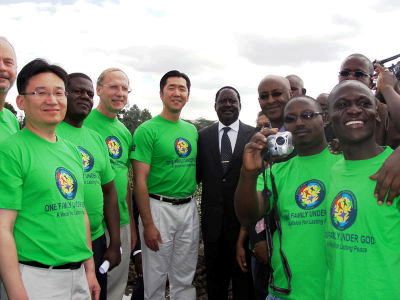 You young leaders are gathered here with high ideals and hope in your hearts. Are you ready to take up the challenge of becoming the moral and innovative leaders in your communities and counties, who develop a new culture of self-reliance, shared prosperity and national leadership?

The task is great but the future is bright. Africa is poised on the threshold of new possibilities and Kenya can shine a light that shows the way forward. Since the post-election violence of 2008, Kenya has made great strides forward. Now you face a new test of that progress in the March elections. If you can spread the vision of a Kenya that can live harmoniously as One Family under God, when you return to your counties, then the country can move forward to still greater heights.

The heart of responsibility for your communities and country that you patriotic young men and women display today will determine the face that Kenya shows to Africa and the world in the future. The task is great but the future is bright. Africa is poised on the threshold of new possibilities and Kenya can shine a light that shows the way forward. It is your commitment and example that will make it happen.
Thank you, and may God bless Kenya.

Watch an excerpt from the GPF 2008