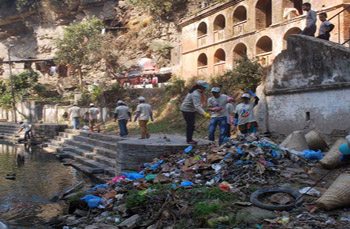 March 22nd was UN World Water Day 2013, with the theme of International Water Cooperation. The following is a report from GPF-Nepal. They have been building a network of partners to clean up the sacred Bagmati River since 2010. This project is a great example of how the Rivers of Peace initiative fosters water cooperation: bringing diverse parts of the society together to restore and protect the Bagmati River, a sacred river and  provider of water and life to the city of Kathmandu. 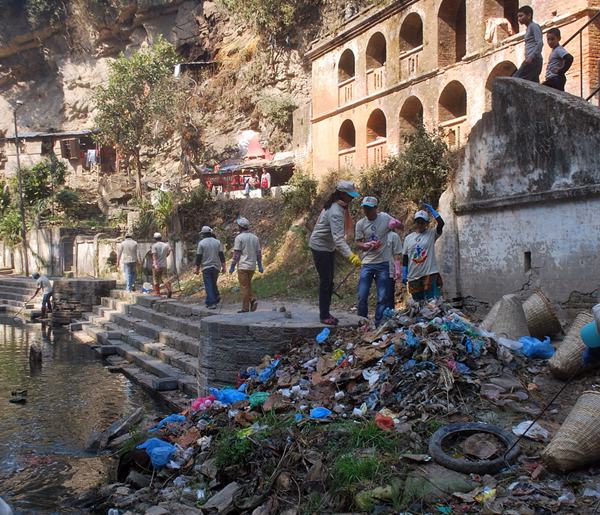 Volunteers clean refuse from the banks of the Bagmati River in Kathmandu.

Volunteers clean refuse from the banks of the Bagmati River in Kathmandu.The Bagmati River is is considered a holy river in Nepal by both Hindus and Buddhists. Hindu devotees perform rituals during religious festivals and also cremate the dead on its banks. Although Hindu temples are located on the river banks in Kathmandu, due to negligence and lack of environmental safeguards, the Bagmati River became the dumping site of solid wastes and untreated sewage.

The River of Peace Campaign (RoPC), an initiative of Global Peace Association (GPA) Nepal, has been working to restore and protect the Bagmati River in collaboration with concerned NGOs, government agencies, other private sector stakeholders and volunteers since its inception in 2010.

On February 9, 2013, some 200 leaders, journalists, security officials, representatives of NGOs and volunteers joined hands in a major river clean-up effort and public awareness campaign.  Rubbish bins were also placed along the river to encourage local residentsto dispose of their refuse properly.

Mr. Krishna Hari Baskota, Secretary, Office of the Prime Minister and Council of Ministers, speaks during the program.During the Public Awareness program, Er. Gajendra Thakur, Project Director of High Power Committee for Integrated Development of Bagmati Civilization, said that Bagmati is struggling to flow freely because of a ten-foot layer of wastes in the river. “We shouldn’t stop until the Bagmati River will turn into the ancient, clean Bagmati,” he added. 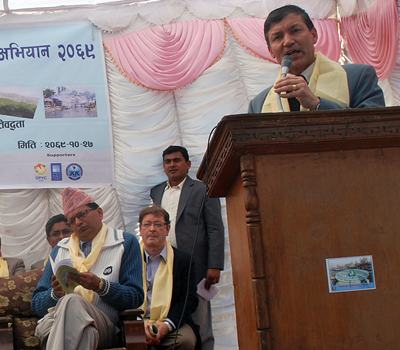 Mr. Krishna Hari Baskota, Secretary, Office of the Prime Minister and
Council of Ministers, speaks during the program.

Quoting the late former Prime Minister of Nepal Hon. Bishweshwar Prasad Koirala, Mr. Damodar Gautam of Bisho Hindu Mahasang said, “You hold the mud of your country and think what you have done for your country.” He said Nepal’s people had polluted the river and for too long ignored the problem. He then thanked the River of
Peace Campaign and its supporters for working to restore the Bagmati River. 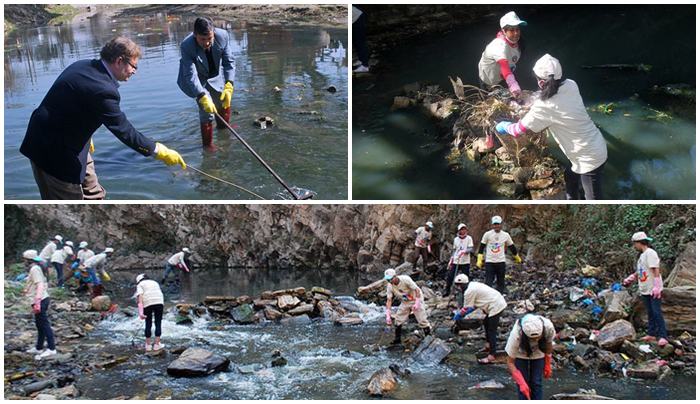 The original article was published on www.globalpeace.org.