Two Rays of Light in Kenya 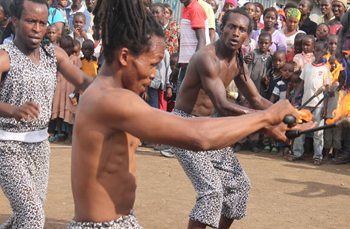 The following report was published in the Chosun Ilbo (Daily), a Korean newspaper on the launch of the Allights Village Project in Kenya.

Two Rays of Light in Kenya

⊙ Principal of Moi Forces Academy in Kenya, “GPF’s character education program has changed everything about the school”

February 1, 4 pm, Chosun Daily sent our reporting crew to Kwa Ngure, a village in Nairobi, the capital of Kenya, Africa. Kwa Ngure is a slum. Kibera is the biggest slum in Nairobi and the African continent, but we did not visit Kibera due to official advisories that warned against holding big events in Kibera. 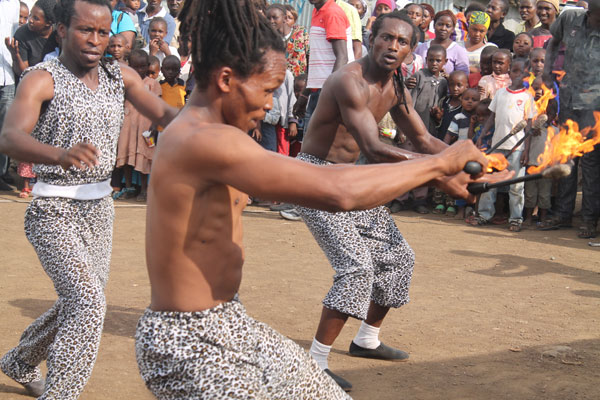 Residents of Kwa Ngure in Nairobi, Kenya, put on a special performance prior to the presentation of solar-powered lanterns. /photo courtesy of GPF Kenya

Our reporting crew traveled to the opposite side of the globe to attend an Alllights Village Project event, organized by Hyun Jin Moon’s Global Peace Foundation. The Alllights Village Project supplies solar-powered lanterns and solar-powered streetlights to villages that do not have access to electricity. These solar-powered lanterns are easily charged: five hours of exposure to daylight provides power for 10 hours. In the remote areas of Kenya, people still use kerosene lamps that resemble lamps that we used to use decades ago in Korea .

Our crew was welcomed by a delegation of ten well-dressed black African men and women  performing traditional dances. They waved their hands, shook their hips and shouted to the music. Although it was 22 degrees Celsius, the dancers had sweat beading on their foreheads. Members of the crew were pulled in to join the dance as they escorted us to the main venue. It was like a scene out of the movie Out of Africa.

About 100 people were gathered under a canopy set up in the middle of the slum. Many of them were Kenyan locals engaged in GPF programs. Prior to the opening plenary, a team of 4 athletes roused the crowd with a demonstration of acrobatics and even a few Taekwondo kicks.

The Kenya-styled event began with an address from each and every significant guest. One by one they stood and spoke in English and Swahili.  One female NGO activist who cares after abandoned children remarked, “This solar-powered lantern will be the miracle of light that will fundamentally change the lives of those who have had to inhale the fumes of kerosene lamps in dark night.” Kenyan government officials also attended the event, expressing words of gratitude to GPF for the solar-powered lantern project. In Kenya it is customary that every participant be given a chance to speak, no one was left out.

Solar-powered lantern project expands from Mongolia to Kenya and beyond

After the congratulatory address was delivered, President Kyung Eui Yoo and other GPF officials presented the solar-powered lanterns. As a launching event, 90 lanterns and 5 streetlights were given. One by one, each village household was presented a lantern; the residents were deeply moved. They finally found ‘light’ in the darkness. They will no longer have to use kerosene lamps in their closed living spaces — stinging their eyes and polluting their lungs, causing lung and eye disease.

Afterwards, our crew visited a family who is now using a solar-powered lantern, a single-mother and her seven children. Her husband had packed up and left one day, never to return. Their small home was about 50 ft2. The door leading into the small space screeched open, it was a patchwork of galvanized steel and only big enough for one person to fit through at a time. It was only 6 pm, but it was completely dark inside. On one side was a bed loosely constructed of scrap wood and on the other side was a small couch they had found on the street. The table was slightly larger than a cutting board and the closet thinner than a hand. We could not imagine how all of them slept and lived in such a small space. They showed us how the solar-powered lantern enables them to study now. Their big smiles spoke loud enough of their happiness.

“The Alllights Village Project does not seek to merely provide lanterns to those in need. This project seeks to help local leaders change the mindset of the residents and help them overcome poverty. We are working together to develop economic independence and community driven development to secure the happiness of all the residents. It is like the Saemaul Undong (New Village Movement) of Korea in the 1970s. In the future, it will expand into a Saenara Undong (New World Movement) that will secure peace that transcends race, religion, and nation.”

GPF is getting positive responses in other countries from the solar-powered lanterns and solar-powered streetlights. In 2012, the province of Nueva Ecija in the Philippines voted to endorse the Alllights Village Project and laid out a project plan that allocates local government resources. The first step Nueva Ecija has been to form a committee, chaired by Cardinal Rosales and composed of university presidents, vice minister of Education, Red Cross directors.

This year, the Kenya government will kick off the Kerosene Free Movement and GPF is a likely partner.  According to a GPF official,  GPF Korea President Kyung Eui Yoo has already discussed specifics with UN HABITAT, Kenya Ministry of Energy, UNIDO, and Light Africa officials during his recent visit to Kenya.

It seems it will be just a matter of time before GPF will be fully engaged in the Kerosene Free Program. The Kenya government is fully aware of GPF programs, especially the support and funding that these projects are attracting. If that happens, it will be a precedent for a Korean NGO to be a contributing member of ‘Nation Building Movement’ in an African country. For Kenya, it is a small cornerstone for progress..

The solar-lantern project is not the only GPF program in Kenya. Moi Forces Academy, which we visited on January 30, is the flagship school for GPF’s character education. During our visit, the principal of Moi Forces Academy gave us a tour. He was full of praise for the school.

80% of the students at Moi Forces Academy are from military families. Moi Forces Academy is one of several schools in the pilot phase of implementing the Character and Creative Initiative (CCI), done in partnership with the Kenyan government and GPF since August 2010.

Rather than focusing on rote learning, CCI focusing on cultivating the school culture. A CCI school forms a School Character Competencies Committee that consists of principals, teachers, staff, and students. Unlike conventional education models where teachers teach students, at a CCI school, teachers and students collaborate to design, choose and implement project ideas.

The student body president at Moi Forces Academy explained a project called ‘Power of 1% for Peace and Change.’ Participating students are asked to share 1% of what they have with others in need: not just money, but time, talents, and skills. This project works with participating students who engage the entire school community in discussions to improve their school and surrounding neighborhoods. The Student body president stressed, “Students must make the change. We need to change our thoughts, to be confident that ‘I’ can change society. We are seeing students making this pledge.” He described some of the project’s specific activities. “We post famous sayings and maxims within the school building. Whenever we see one, we take a moment of self-reflection. Students are encouraged to live prudently, we save our coins and unused items for donations. We even started gardening for ourselves.”

“As we integrated the CCI program into our school, we saw remarkable improvements in students’ attitudes and performance. This in turn had impact on the faculty’s satisfaction level and subsequently enhanced the quality of service provided to students. CCI has changed everything about this school. As students’ performance improved, the school’s reputation among parents soared. We have received a record number of applicants.”

Recently school officials were amazed to receive 400 applications for one available opening.

The seven schools in the pilot phase have adopted different models of the Character and Creativity Initiative. For example, students in lower grade schools have planted trees that symbolize a personal motto for their inner growth. They reflect on their growth as the tree grows. Other schools have run the Talk to Me program that teaches self-talk and dialogue with peers.

Every model of CCI has been deemed a success. KIPPRA, (the Kenya Institute for Public Policy Research and Analysis), published a report based on a two-year research study that concludes that CCI programs have generated outstanding results, encouraging the Kenya Ministry of Education and Kenya School Principals Association. In 2013, the Kenya Ministry of Education issued an education management policy regarding character and creativity that establishes guidelines that make character and creativity education a major standard for evaluating schools and teachers. The Kenya School Principals Association will hold CCI meeting in each school district to expand CCI to a nationwide level. These discussion forums on CCI’s best practices will be held in all 47 regions, hosted by each chapter of the Kenya School Principals Association. This is the impact that GPF has made thus far on Kenya’s public education.

Until now, Africa has evoked negative images: poverty, starvation, tribal disputes, malaria, HIV, corruption, and military dictatorships. There is a saying that used to fittingly describe Africa’s situation, “Yesterday was dark, today is dark, and tomorrow will be dark.”

Aid organizations from across the world have poured countless amounts of supplies and capital to build hospitals and schools in Africa, and the situation seems dire. The term ‘Aid Trap’ was created to raise concern that aid was resulting in laziness, idleness, and corruption. However, despite these negative perceptions, through the collective efforts of the global community, there have been marked improvements on the African continent.

GPF is among such contributors. It is bringing in the diligence and commitment of Koreans who’s nation endured decades of Japanese annexation and then war, but managed to become one of the top 10 economies in the world.  Dr. Hyun Jin Moon, Chairman of GPF is encouraging Koreans to work with their Kenyan brethren to share its success with the African continent. The Korean Saemaul Undong  (New Village Movement) implemented during the Park Jung Hee presidency, is recognized  in most African countries as an exemplary model of social and economic development, making it easier for GPF to bring its programs to Kenya.

During our short, less-than-a-week stay, we were pleased to see that Koreans have something to offer to Kenya as it looks ahead. ⊙