“The North-South Korean Unification Issue Cannot Be Resolved through Politics and Foreign Diplomacy alone… A Civilian Track will be More Effective.” 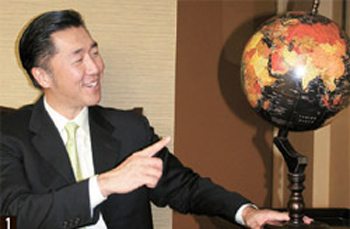 April 6th, the JoongAng Daily Newspaper published the following article of a recent interview with Dr. Hyun Jin Moon. From the issue of North-South Korean Unification to raising nine children, the article is an intimate conversation with Dr. Moon on his perspectives of leadership, spirituality and peace. 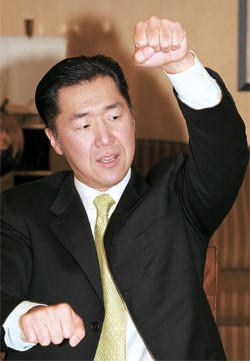 GPF International Chairman Dr. Hyun Jin Moon explains the Korean reunification movement at a hotel in Seattle on the 26th of March. [Photo courtesy of GPF]

The Columbia graduate (1995) has certainly made good use of his history degree. During the two and a half hour interview he went back and forth between the histories and philosophies of both East and West. He underscored the concurrence between the philosophy of Hongik Ingan (홍익인간) that Dangun elucidated 5,000 years ago, and the meaning of freedom and human rights outlined in the U.S. Declaration of Independence, written 230 years ago.

This is Dr. Hyun Jin Moon (44), GPF International Chairman and UCI President, 3rd son of the late Rev. Sun Myung Moon, leader of the Unification Church. Dr. Moon was interviewed at a hotel in Seattle, Washington, on the 26th, two days after Tongil Group President Kook Jin Moon (43) was discharged by the Unification Foundation, which serves as a holding company for the Unification Church and Tongil Group. Kook Jin Moon’s dismissal may be a turning point for Dr. Moon.  Last September, Dr. Moon returned home unable to pay his final respects to his father. Thereafter he was considered removed as a possible heir .

Although Dr. Moon was repeatedly questioned about the issue of succession, he adamantly said, “I am not interested in the internal conflict.” Instead, he wanted to talk about ‘moral authority’ that would benefit  the entire world. During the interview, he never got side-tracked, always returning to his main points: Hongik Ingan and the founding spirit of the United States. He said of his father, “He is not the founder of the Unification Church, but the pioneer of the Unification Movement, a peace movement that worked outside of the religious box.”

Q: Your brother was just removed from his position. Is this a good thing for you?

“I have never been involved with this heir issue. If you are framing the issue similar to that of shareholders within a corporate entity then you completely misunderstand who I am.  There are leaders in the Unification Church that still want to remain in the Unification Church box.  This is the case for any other religion.   This is not how it should be.  These leaders should strive to become spiritual leaders rather than just religious leaders. If they can get out of their own religious boxes, they can do great work which can influence entire humanity.”

“If Mahatma Gandhi just represented the Hindus, he could not have led the national movement of India, which was made of Hindus, Sheiks, and Muslims. But, he aspired for something greater than just the religion that he was a part of.  It was the same thing with Martin Luther King, Jr. If he talked on behalf of just Southern Baptists, there is no way he could have led the Civil Rights Movement. I believe that there are fundamental universal principles and values that all the faith traditions share. Actually, I would say about 80 to 85% of what people of faith believe, regardless of their faith tradition, are the same.”

Q: What is your take on the trouble between your siblings?

“I have explained countless times that this is not a fight amongst brothers, but to no avail.   The premise that the Unification Movement is like a Chaebol (business conglomerate) was completely wrong to begin with. In a spiritual movement, position does not matter.  Moral authority is what is most important.  I’m not a political person. Therefore, I have no interest in the internal politics of an organization.  Rather, as a person of deep faith, my mission is of great importance to me. I believe in the saying: “All good things come to those who wait.” (The 2.4 billion dollar legal battle between Dr. Hyun Jin Moon and former President Kook Jin Moon over the PARC 1 construction in Yeoido, Seoul, is pending a final ruling by the Supreme Court. Dr. Moon won in both the first and second cases.)

Q: What are the values that you speak of?

“North and South Korean unification. If you study the Hongik Ingan philosophy and the founding story of Gojoseon (Korea’s first kingdom), you realize all the basic merits that advocate for fundamental human rights and freedoms that the United States espoused with its creation in 1776 are there. This is not an ancient philosophy. It is amazing that this was the founding idea of Korea five thousand years ago. The Hongik Ingan philosophy is in a way the thread that holds the two people of South and North together. The issue of Korean unification will fundamentally impact the course of how human history advances.  I am very frustrated about how narrow and how small the leadership of Korea is thinking. True leadership is based on moral authority.”

Q: It seems like you have exceptional conviction in the reunification of North and South Korea.

“Thanks to my father, I had the unique opportunity to observe his efforts for unification. I have also met so many different kinds of people regardless of position, nationality or race. So, I can curse with the best of them, I can speak highbrow with the best of them. I see no contradiction. My father was the one who opened the door to North Korea, and the current unification efforts are based on what I learned through those experiences with my father.  What is more effective than the inter-governmental dialogue and political solutions of ‘Track 1’ diplomacy is a ‘Track 2’ civilian level peace movement.  This is the approach GPF is taking.”

“Tell me one region in the world, any crisis in the world that was solved through diplomatic and geopolitical solutions. A Great Awakening was a key factor for the movements led by Gandhi and Dr. King.  These two pioneers touched upon universal principles and values that moved their nations and its people to eventually have political solutions that secured the rights of Blacks and all minorities.”

Q: Have you been to North Korea?

“Not yet. My son went to North Korea to volunteer in service projects.  If I go, it will not just be to take photos.   Last year GPF established a bakery in North Korea to feed undernourished children. Every day the plant produces 5,000 baked goods that are distributed to local kindergartens and grade schools for lunch. Bread has a short shelf-life compared to flour, and this way, there is less possibility for the food to be used by the North Korean military. My hope is that we will be able to eventually bring the Alllights project into North Korea to provide light in regions with no electricity.”

Q: Can you describe your reunification movement?

“One of the things that the Korea United initiative is doing is bringing together all of these NGOs under one banner. Currently about 400 organizations are working together including conservatives, liberals, Christian, and Buddhist organizations. One of the fundamental flaws during President Dae Jung Kim’s Sunshine Policy was that NGOs created many independent initiatives to engage with the North. As a result, much of the aid sent to North Korea did not reach the North Korean people.  However large or small, every Korean should be able to contribute to the unification process.”

Q: It seems your convictions towards reunification are stronger than your religious beliefs.

“The standard of leadership that I am advocating around the world is moral and innovative leadership. The financial crisis in America is not due to a breakdown of the global financial system.  It was due to the erosion of the moral and ethical foundation that made American capitalism great. Simply put, the political-class legislated economic policies eventually led to the collapse of the housing market here in America.”

Q:  Do you have examples of how you are changing the world?

“Let me give you two examples.  We recently helped arrange a meeting with national representatives of the Mongolian government in Washington D.C. to meet with top think-tanks. Mongolia wants to become a seventh member of the six-party talks. These are based on ideas that I shared with the Mongolian government in 2011. This type of vision can change the landscape of geopolitics in Northeast Asia. In Africa, in Kenya, GPF contributed to the drafting of a new constitution. Our efforts led to the recent successful election without bloodshed. Civic NGOs are able to accomplish what the UN has not been able to do.  “

Q:  What was the most difficult moment in your life?

“No comment. It is usually the most difficult moments in your life that are the most reflective and greatest teaching moments. I don’t really express my emotions. You cannot turn an apple into an orange or an orange into an apple. You will have to take me as I am.”

“I don’t compete, but I ride for recreation. I love the countryside and I love creation and animals.  I grew up with really ‘the salt of the earth’ type of people. My father loved fishing. Every summer I used to go fishing so I basically grew up with fishermen and people who hunt.”

Q: You are only in your 40s, but you have a lot of gray hair and you already have a grandson.

“Because of my background,  I had to grow up very quickly.  I had to quickly grow into adulthood. I got married when I was 20. Being married at a young age and being a grandfather in your 40s is not abnormal within my family. I know it seems very strange now (laughter). You can say I am a real traditional Korean. Korean society has changed a lot but I’m still carrying on the Korean traditional family model in America.”

Q: You have nine children. How did you raise them all?

“I have to give a lot of credit to my wife, who not only bore nine children, but also has raised nine children to be children that I’m very proud of. My oldest son graduated from West Point and my second one will be attending. My wife graduated from Julliard in both undergraduate and graduate schools. She could’ve had a career as a concert pianist, but she gave up her own personal ambitions for her family.”

Q:  You had a grandson a few years ago. How did it feel?

“It has been wonderful.”