Timeline of the Division of North and South Korea 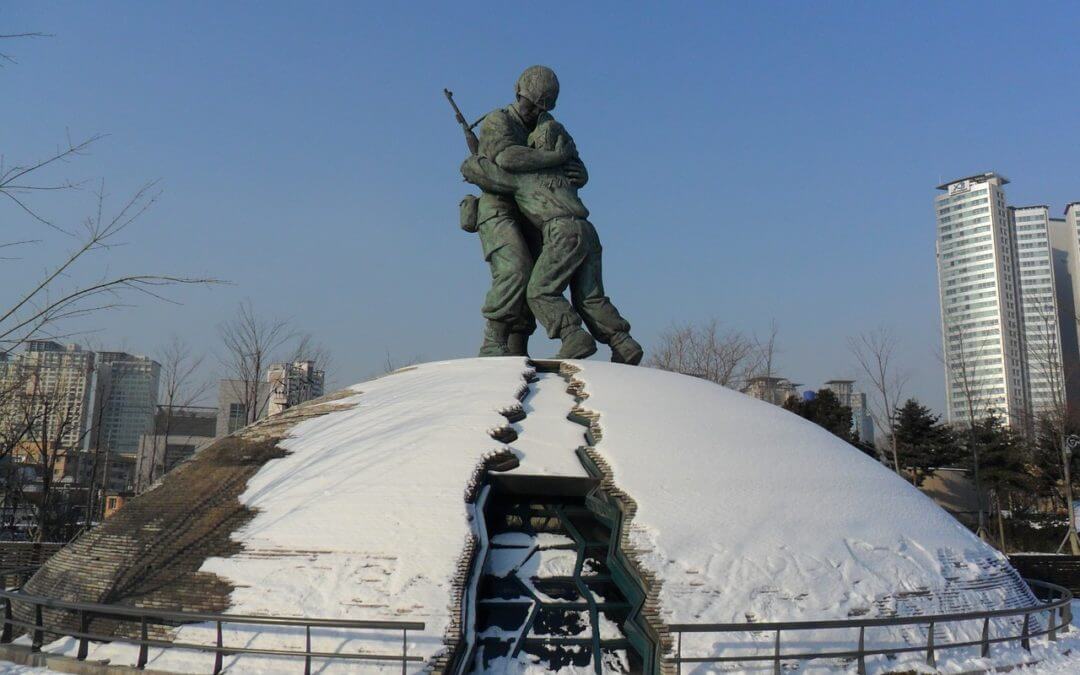 Since their annexation in 1910, the Korean people have been longing for a free and independent homeland where their people can secure prosperity for succeeding generations, becoming a nation that can manifest their destiny of becoming a people who can benefit humanity.

However, their dreams have been thwarted for more than a century. In some part, this delay it is due to ideological divisions that appeared within Koreans themselves, sown as they sought international support for their independence.  Some looked to the communist people’s movements growing in the Soviet Union and China. Others reached out to the United States and other nations in the democratic world. Some, like Kim Gu, looked to the roots of Korean identity as well as universal principles found in the world’s religions.

The Unification flag was created to represent North and South Korean representation in international sporting events.

When the opportunity for independence came at the end of World War II, these differences became apparent, manifesting in division and conflict within the Korean independence movement. The international community saw this internal conflict as signs of the Koreans’ unreadiness for independence.

What followed was a period of trusteeship that divided Korea along the 38th parallel, with a Soviet monitored North and South regulated by the United States. Mounting Cold War tensions would only aggravate the divisions, leading to the Korean War.

Even after three years of fighting and over 2 million civilian lives lost, peace and independence eluded the Korean people. The war would enter a stalemate with an armistice agreement that has yet to yield a peace agreement, leaving the Korean people divided for over 70 years.

The story of the two Koreas can serve as a lesson, as prospects of talks re-emerge, of the importance of finding a common vision that can cross the ideological chasm that has only grown wider over the seven decades of isolation from each other.

A moment of self-reflection is necessary for the Korean people to ask themselves, “What is our shared destiny as a Korean people?” Only then can common roots that transcend the divisions that have been more than a century in the making be overcome so the hard task of coming together can finally begin.

Timeline of the Division of North and South Korea

End of World War I and Independence Movements

1919 March 1 Declaration of Korean Independence begins Korea-wide movement for independence, engaging 2 million Koreans (10% of the population). The movement dies down without attaining Korean independence, but gives rise to sustained independence efforts by Koreans abroad. During this time, small differences of ideology would become apparent, deepening as time wore on without independence.

1919 April 13 the Korean Provisional Government was established in China by Koreans who had moved to China, supported nominally by the Chinese National Government. It tried unsuccessfully to attend the Paris Peace Conference at the end of World War I to bring up the issue of Korean independence.

1943 December Cairo Conference – the U.S., China and Great Britain recognize the “enslavement of the people of Korea,” and “determine that in due course Korea shall become free and independent.” Many nations, including the U.S. did not deem Koreans ready for self-governance. A trusteeship was proposed.

1945 September 6 After months of organizing people’s committees under the “Committee for the Preparation of Korean Independence,” the People’s Republic of Korea was recognized by a congress of local representatives.

1945 December At the Moscow Conference, Allies agree to a U.S. proposal for a 5-year trusteeship over Korea dividing the peninsula along the 38th parallel. The Soviet Union would monitor the transition of the territory to the north, and the U.S. would monitor the south.

1946-1947 A Soviet-U.S. Joint Commission meets to work towards a unified administration, but Cold War tensions, as well as Korean sentiments against trusteeship hinder progress.

1947 November 14 UN passes resolution asking for free elections to be held in Korea and that all foreign troops be withdrawn. The UN establishes the United Nations Temporary Commission on Korea (UNTCOK). The Soviet Union boycotts vote.

1948 April conference for North and South meet in Pyongyang to discuss how to mitigate rising tensions. Southern representatives Kim Koo and Kim Hyu-sik attend, pushing for unity. The conference does not produce results.

1948 September 9 North Korea declares the Democratic People’s Republic of Korea, with Kim Il-sung as its premier.

1948 December 12 the United Nations General Assembly recognizes the Republic of Korea as the only lawful government of Korea.

1953 July 27 After 2 years of ongoing negotiations, an armistice agreement is finally reached, divided Korea along the 38th parallel again. Although the armistice agreement includes a provision for continued peace talks, there has not been a final peace accord ending the war. 2.5 million deaths are recorded for the Korean War. North and South Korea remain divided for over 70 years.