The Story of the Latin American Presidential Mission 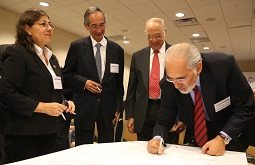 Former President of Paraguay, Juan Carlos Wasmosy, opened the Americas Summit by stating, “What is happening before my eyes here in Atlanta is a dream come true.” 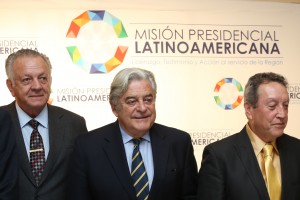 Presidents Wasmosy, Lacalle and Cerezo spearheaded the Latin American Presidential Mission launched at the Global Peace Convention 2012. In 2010 they signed the Asuncion Declaration, and have worked together since.

His journey to Atlanta began in October 2010, at the first Global Peace Leadership Convention in Paraguay. At that convention, Global Peace Foundation founder Dr. Hyun Jin Moon challenged Latin American leaders to “pave the path to peace and reconciliation in this hemisphere by becoming a leader in the global peace process through the vision of ‘one family under God’.”

Dr. Moon referenced the United States to stress that peace and stability are not determined by the economic or political structure of the state, but by its founding principles. The United States was founded upon a declaration that all men are “endowed by their Creator with certain unalienable rights” that supersede any man-made authority.

President Wasmosy recalls how he and a handful of others, including  Luis Alberto Lacalle (former president of Uruguay) and Vinicio Cerezo (former president of Guatemala), responded to the challenge and signed the Asunción Declaration. They affirmed their “desire to work – beyond religious, political, social, and ethnic differences – for the unity of Latin America as a continent of peace and future that can shine light in a world filled with uncertainties and confusion.”

The Declaration is constructed upon spiritual and universal “civic values and virtues,” as a means to address the social and economic issues of the region as well as build greater Latin American solidarity and hemispheric cooperation. It has become the impetus for a continental movement.

Over the next year, the Global Peace Foundation, worked together with the “Instituto de Desarrollo del Pensamiento Patria Soñada”(IDPPS), a think-tank in Paraguay, the “Esquipulas Foundation for the Intergration of Central America” based in Guatemala, and the “Uruguay Leadership Conference” gathering notable former and current national leaders who resonate with the vision elucidated in the Asuncion Declaration. 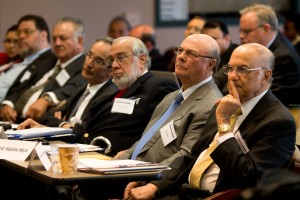 President Wasmosy recounted how his circle of friends and colleagues who shared in the dream of a Latin American revival continued to grow.

The next year, 2011, a second international conference was convened in the Brazilian capital of Brasilia. It focused on the issues of ethics, energy, and food security, emphasizing that sustainable development must be built upon ethical principles. It resulted in the Brasilia Declaration that expanded on specific points of the Asuncion Declaration and called on Latin Americans “to recognize and overcome our past mistakes and to dream again and achieve the great goals of this continent.”

Shortly thereafter, former Presidents Wasmosy, Cerezo and Lacalle met together in Paraguay with the directors of the supporting foundations and think-tanks of their respective countries and proposed the creation of the Latin American Presidential Mission to be officially founded at the Global Peace Convention in Atlanta, Georgia, USA. The mission calls upon current and former Latin American heads of state to bring their “Leadership, Testimony and Action” to secure the future of Latin America and forge greater hemispheric cooperation based on principles, values and aspirations common in both Americas.

President Wasmosy stated, “Our conscience and ideals chart the map for our lives, our families, our leaders, our nations and an ideal world.”

The Americas Summit examined the shared values of the Americas, the common challenge and need for better education, and opportunities for hemispheric integration through trade and investment. 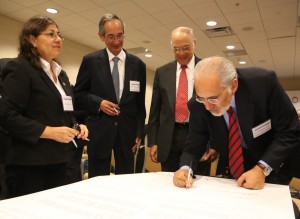 President Mesa of Bolivia signs the Presidential Mission as President Colom from Guatemala and President Barletta of Panama look on.

On December 1st, the Americas Summit concluded with the signing of the founding document of the Latin American Presidential Mission by eight former presidents from the Dominican Republic, Guatemala, Panama, Ecuador, Bolivia, Paraguay and Uruguay. They were supported by eight additional former presidents from Mexico, Brazil, Colombia, Bolivia, Guatemala and El Salvador who were unable to attend but sent video messages and letters of support.

It may be a “dream come true” but is also a challenge to pursue a bigger dream. Every member of the Latin American Presidential Mission is committed to “take up the mantle of moral and innovative leaders and build a legacy of the highest ideals for our communities, nations and the entire human family.” 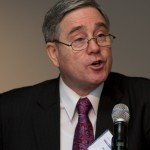