“The Most Physically Challenging Experience” – Four Days on the Olympic Coast 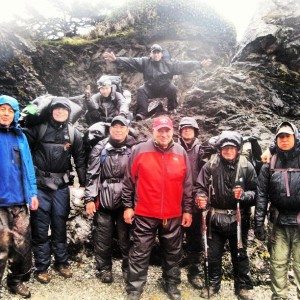 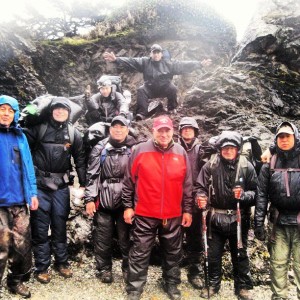 Team Aoki bonded through the trials they faced together in the great outdoor.

According to Kenshu Aoki, President of the Global Peace Youth Corps-USA (GPYC-USA) and adventure workshop team leader, “This 4-Day hike truly brought out the adventure in the adventure program.”

For four days, the adventurers had to crawl through the mud, sleep in the rain, slip on wet algae covered rocks, get beaten by waves, and swept away by 6 foot tides. “The Pacific Ocean is a monster,” Mr. Aoki commented later.

For many, every day was a question of life or death. Mr. Aoki had several people who came from landlocked and temperate climate nations. The sound of the Pacific Ocean waves crashing against the rocks kept them up at night.

Such challenges push one beyond imagined limits and reveal one’s true strengths. 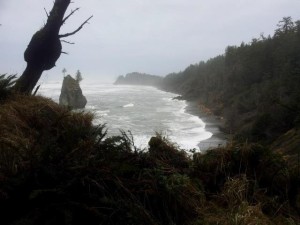 The jutting coastal line and every-changing tide made the Olympic Coast difficult to navigate without a map.

The Map is Key

The Olympic Coast is covered with rocky terrain, cliffs, and coves. One can’t see what is coming up next. What is more, the rhythm of the tides changes the landscape constantly. Without a map, it is nearly impossible to ascertain what lies ahead.  One misinterpretation of the map could throw the team off for hours, if not put them in peril.

In this case, the map was crucial to show the teams where they were, what lay ahead, and where they needed to go, in some cases through unbroken paths, to reach their destination.

But the terrain was not the only thing that needed to be figured out. In Mr. Aoki’s case he was the youngest member of the team, but team leader. He had to figure out how to navigate between differing abilities, ages, and opinions to make his team a cohesive unit that would make it safely back to basecamp.

For that, nature dished out its full course of lessons, and the team responded by galvanizing together. To accommodate the varying abilities, some team members volunteered to carry more load in their backpacks. Those who could not carry as much, worked hard in their own capacities: waking up early to start the coffee, collecting water, and cooking meals. Giving up was not an option for team Aoki.

A bonding experience to be pulled out by team members from thigh deep quick-mud.

While walking over a particularly muddy patch, a team mate from Brazil found himself sinking thigh deep in quick-mud. His team mates responded immediately. Painfully and slowly they pulled him out. Narrowly averting serious injury, the mud-covered hiker was all smiles. He thanked his teammates and said of the moment, “This was the best experience.”

“By God’s grace, we made it back with no major injuries,” said Mr. Aoki at the close.