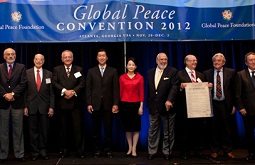 Nine former presidents of Latin America convened during the Global Peace Convention 2012 for the Americas Summit. They signed the Presidential Mission, committing to further hemispheric cooperation not merely based on economic and political cooperation, but on share principles and values of both North and South America to create a model  of peace for the world.

The following is the remarks by Dr. Hyun Jin Moon given at the Summit opening at the Carter Presidential Center.

A Great Spiritual Awakening in the Western Hemisphere

What a special honor it is to join in this prominent gathering of former presidents and statesmen from Latin America and the US, here at the prestigious Carter Center which itself carries on the important work of a former US president.

It would take too long to mention each one of you by name, but I especially want to salute former Presidents Juan Carlos Wasmosy of Paraguay, Luis Alberto Lacalle of Uruguay, and Vinicio Cerezo of Guatemala for their support of our work at the Global Peace Foundation over the past few years.

This meeting of leaders is of great and timely significance.

I say this because we are living at a unique moment in the history of the Americas and the world. At this time when the world’s focus is shifting towards the pan-Pacific rim region, the Western hemisphere of North, Central and South America have a vital role to play to ensure that proper principles and values, rooted in the affirmation of our spiritual nature as human beings, are not only transmitted, but become the core of any effort to spread democracy and a free market system to other nations and future generations.

The challenge before us, the moment we must seize, is an opportunity to kindle the fire of a great hemispheric awakening rooted in spiritual values.

It is important to recognize that  the task ahead of us is not merely the promotion of democracy and capitalism.

Why do I say this?

Because it was not the democratic process itself, nor the free market system alone that shaped America into the nation it is today. Rather it was its underlying principles and values that enabled it to become a great nation.

We here in the Americas, must be anchored in  spiritually oriented principles and values in order to present a counterweight to what some emergent states are offering today.

There are many who stress the differences between the United States and Latin America. But to focus on our differences is a serious mistake.

However, if we embrace our commonalities, we can come to a proper understanding and appreciation of our differences.  The Americas, as a whole, have significant historic and geographic connections.

The Americas are also experiencing substantially expanding ethnic ties. The Hispanic community in the U.S. produced the largest minority voting bloc in the recent elections here, and made a significant impact on key races throughout the nation. Also, a considerable portion of income produced by the hard work of this community is sent through remittances to their families in their countries of origin, which has a huge economic impact on many nations.

The bonds between the United States and Latin America are more important than ever.

Leaders in both the U.S .and in Latin America need to understand the import and opportunity that can be found in the mutual relationships of the Americas.

Enduring relationships that yield good results must be based upon ethical principles and shared values.  They provide the foundation that fosters mutual respect, collaborative efforts, and shared benefits.

There is broad common ground for the peoples of the Americas, and indeed all of humanity, in universal spiritual principles as conveyed in the essence of our faith traditions.

Faith in God, the Creator, was the guiding inspiration for those who pioneered the cause of independence for the Americas.

The most important expression of universal principles as the basis of human liberty is found in the Declaration of Independence.

As a “vision statement” of the United States, it asserts: “We hold these truths to be self-evident, that all men are created equal, that they are endowed by their Creator with certain unalienable Rights, that among these are Life, Liberty and the pursuit of Happiness.”

These lofty principles are not just applicable to the citizens of the United States; they establish the fundamental foundation for human rights and dignity for all people throughout the world.

Even our respected presidents, here with us today, have to recognize that they are first and foremost human beings with a spiritual nature, guided by principles and values.

That’s the essence of our humanity. We are moral beings guided by an ethos that has been part of our nature since human creation. The same recognition of universal, spiritual principles that extend beyond religious or philosophical differences was expressed in the words of Simon Bolivar, when he said: “Jesus, who was the light of the Earth, desired no dignity or crowns in the world; he called men his brothers and taught them about equality, about the most republican civil virtues, and commanded them to be free.”

When I toured throughout Latin America and met with presidents, parliamentarians and civil society leaders, I found the same, shared resonance with these principles as the foundation for just, prosperous and democratic societies.

The important similarities between the United States and Latin America are found in ethical, moral and civic values, in the call to patriotism, and in the understanding of the value of the family. 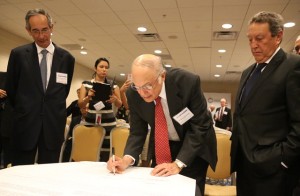 Being a man of faith, I feel the hand of Divine Providence leading us to a new era of opportunity and prosperity in the hemisphere of the Americas.

Beginning from a common ethos that honors God and the intrinsic value of all people, we should now aspire to build nations where the respect for human dignity, the love of liberty, and the accomplishment of responsible citizenship may flourish.

The challenge for us in the Western Hemisphere of North, Central, and South America, is to come together to champion these principles and values; and especially to champion the global vision of “One Family under God”. Our common heritage rooted in Christian faith strongly resonates with this universal vision. The essence of Jesus’ teaching was meant to create a new ethos based on true love which could transform cultures, societies and the world, Yet that ethos has yet to be realized, and remains as a hope and aspiration of all people.

It is for this reason that a great awakening is needed today.

So, I challenge the leadership of the Americas gathered here to not only address issues of this hemisphere that pertain to an economic, political, or diplomatic context, but also to address the need for a spiritual awakening that uplifts the shared values that can accomplish true integration and enduring development.

Focus of the Americas Summit

Toward the fulfillment of that goal, this hemispheric conference will analyze critical concerns and gather insights; with the contributions of the Latin American statesmen gathered here—former presidents and leaders of nations who came to share their wisdom and experience.

This Americas Summit will focus on three key issues.

1. The first is the common ethical values that should govern relations among us. I spoke on the importance of shared principles and values.

They are essential to any relationship and form the glue that binds us together.

2. The second is education as a source of values, knowledge and skills. Quality education should result in citizens of good moral character who have confidence in themselves, and are able, through critical thinking, to reach their goals.

Quality education should be an investment, a priority for any nation that seeks a bright future. It should engender objectivity, rational thought, and a willingness to participate in the practice      of good citizenship.

3. The third issue is trade and investment, necessary for the prosperity and well-being of all. Business practices must be guided by ethical standards to create societies of equity and peace.

I think most would agree that a major cause of the global recession and financial crisis can be directly attributed to the erosion of ethical principles and values.  If those in power do not regulate themselves, then any system or institution can experience corruption and eventually collapse.

We are striving to fulfill the goals articulated in the Asuncion Declaration which was adopted by former presidents and leaders at the Global Peace Foundation’s first Latin American Leadership Conference in Paraguay in 2010. Centered on this Declaration, a large number of former Latin American presidents, many of whom are with us here today, have agreed to join forces to create what will be called the “Latin American Presidential Mission”.

I applaud the commitment of this Latin American Presidential Mission in convening with such a lofty purpose.

It is a call to civic activism that draws on the experience and talent of former presidents, and is supported by other leaders from different areas of the continent.

With the slogan: Leadership, Testimony, Action, it will offer innovative perspectives to critical issues and contribute to their solutions. It will be idealistic yet realistic, going from less to more, from the grassroots to the summit.

Our Future: Moral and Innovative Leadership 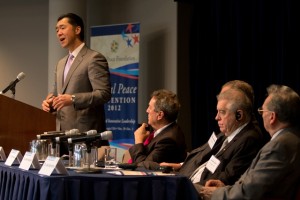 First, it is leadership which promotes a “greater good” that can benefit not only the individual, but the whole society, the nation, and ultimately the world.

Such leadership must be guided by clear vision, irrevocable principles and universal values; with the breadth and depth to encompass the diversity of the human family.

Second, we need to harness innate human creativity to advance and develop the human condition. This is the innovative component of leadership.

In every culture, extraordinary men and women have propelled humanity forward in the fields of philosophy, ethics, science, sports and cultural arts, freely exercising their God-given talents even to the point of challenging existing paradigms.

With a dream of a bright future, the Global Peace Foundation, an international NGO that I chair, is leading efforts for peace based on a spiritual vision expressed in the simple but profound phrase, of “One Family under God.”

The transformative power of this vision is found in the fundamental truth that all people, regardless of race, religion, nationality, tribe or ethnicity, are spiritual beings who share a common heritage in one God or Creator.

Moral and innovative leadership provides vision and action that builds a positive legacy for the future. It recognizes that the most fundamental human problems cannot be solved by politics, diplomacy, economy, or science alone. Essentially, sustainable solutions must address root causes, and therefore must include the intrinsic spiritual dimension of the human experience. In short, political authority cannot force, nor can money buy, the virtues necessary to resolve conflicts and build moral and ethical societies.

Recognizing the growing influence of Latin American communities in North America and the growing geopolitical and geo-economic influence of Latin American nations on the global stage, I want to conclude by saying once again that this time and circumstance are ripe for calling forth a great spiritual awakening, in our hemisphere and beyond, that can summon the creativity, energy and motivation for a global ethical, social, political and economic transformation.

I firmly believe that now is the time for such transformation.

The vision of “one family under God” can inspire and motivate a spiritual peace movement that is the vanguard for this great awakening, beginning here in the Americas.  My hope is that this Americas Summit and the larger Global Peace Convention will serve as catalysts that ignite and invigorate that movement.

I challenge each of us, especially our presidents here, to take up the mantle of moral and innovative leadership, that together we can build a legacy of the highest ideals, for our communities, nations, and the entire human family.