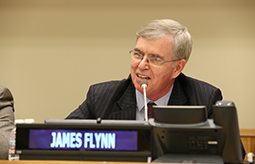 “Moral leadership is more precious for the future of a nation than gold, diamonds, or oil. It is guided by a common vision that reflects the most fundamental human aspirations, conforms to the universal spiritual principles that govern human life, and is expressed in shared moral values that can ultimately form a global ethic.”

Let me begin by appreciating the distinguished panel for contributing their insights and inspiration to this important session. Also special thanks to the Paraguay Mission for serving as the lead sponsor for this UN forum, along with the Permanent Missions of 23 other nations. The Global Peace Foundation is proud to join with our partners in collaborating on this forum and in convening the IYLA program each year.

Also I would like to especially appreciate all of the participants of the International Young Leaders Assembly 2014, representing nearly 70 nations. The fact that you are here, investing your time, energy and focus, addressing important issues facing our world today, is indicative of a quality of character vitally needed if we are to build a better future. Simply put, I believe that you are here because you care, because you want to make a positive difference, and because you are ready to take action for the greater good. 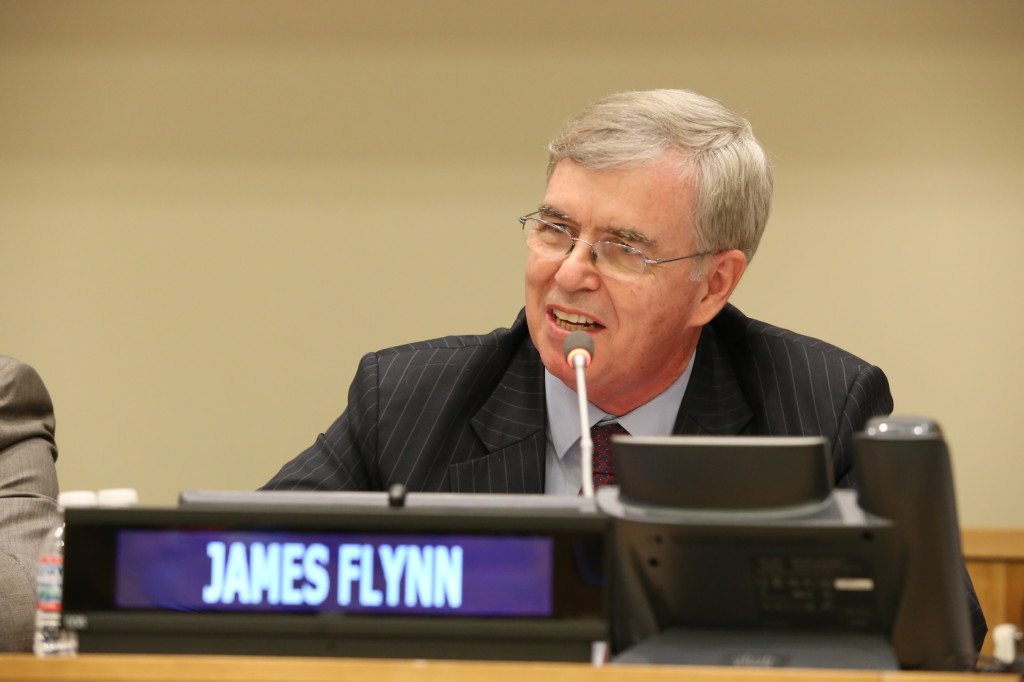 It is most significant that the culminating sessions of this IYLA are here at the United Nations, the pre-eminent global institution dedicated to building peace. In the nearly 70 years since its founding, the UN has expended tremendous effort and resources in the cause of peace and security for all nations. Despite such dedicated efforts, tragically our world is still plagued by conflict, corruption, and poverty.

Clearly no one institution alone, no matter how comprehensive its scope, can solve the fundamental problems of the human situation. It will take all of us as global citizens, working together in common cause, to transform our world. That is why it is meaningful that you as young leaders are here to discuss, engage, and aspire together to make a difference.

As we all know, our world has changed dramatically over the past few decades. Technology and globalization are impacting the lives of people everywhere, driving change at a breathtaking pace. It is remarkable to note, for example, that this year the number of cell phones globally will reach 7.3 billion, exceeding the world’s total population. We can communicate, transact and travel with an ease previously unimaginable.

Yet with the great promise of this 21st century, we continue to face dire realities and ominous challenges, on every continent. Consider that:

• The BBC reports that every minute, two people are killed in conflicts around the world.
• According to UNICEF, 22,000 children die every day due to poverty. That means a child dies every 4 seconds.

Our most pressing challenge today is an ethical one. Our technology can gather massive data on our browsing habits and consumer preferences, but cannot help us to understand each other, respect each other, or forgive each other. General Omar Bradley most aptly described the dilemma we face, when he said:

We are faced with a significant gap between our external development and our ethical maturity. Technology has driven rapid development, but itself is value neutral. It can be used to improve the quality of life and well-being for all people, but can also be used for weapons of mass destruction. We are in dire need of ethical leadership, leadership with moral authority, because we are seriously limited by a values deficit, a debilitating shortfall in values that hampers our ability to realize the promise of the 21st century.

Great transformative leaders of the 20th century – Gandhi, King, Mandela – were such persons of moral authority. Of the importance of values, Dr. Martin Luther King Jr. said “this is a moral universe, and there are moral laws of the universe just as abiding as the physical laws.”

The theme of this forum is quite meaningful: “Moral and Innovative Leadership: Vision, Service and Entrepreneurship.” This unique juxtaposition – moral and innovative leadership – we believe encapsulates the leadership qualities needed for our time. A moral leader is guided by an ethical framework rooted in universal principles and shared values. A moral leader has integrity, and is committed to advance the greater good before self-interest. To quote the GPF Chairman, Dr. Hyun Jin Preston Moon, who first introduced the framework of moral and innovative leadership in 2010:

“Moral leadership is more precious for the future of a nation than gold, diamonds, or oil. It is guided by a common vision that reflects the most fundamental human aspirations, conforms to the universal spiritual principles that govern human life, and is expressed in shared moral values that can ultimately form a global ethic. On the foundation of a solid ethical framework, innovative leadership can tap the wellspring of innate human creativity, ingenuity, and the power of innovation so that they could be channeled to address even the most intractable social problems.” 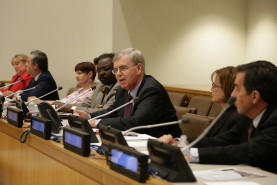 “Let a noble vision guide your steps.” GPF president Jim Flynn urges young leaders to reach for a purpose that benefits all humanity.

Globalization has brought us into close contact and interaction with people quite different from ourselves. While that affords us a rich opportunity, it also could lead to more serious identity-based conflicts. When such conflicts are framed in religious terms, fueled by extremist interpretations, and rapidly connected through worldwide networks, then the threats immediately have global implications. As the current situations in Iraq and Gaza remind us in jarring detail, a global consensus is urgently needed that uplifts the essence of our common humanity, affirming the universal values necessary for a diverse world of freedom and peace.

It is our conviction that all people – regardless of race, religion, ethnicity or station in life – share a common essence and heritage – our “humanness” extends beyond even our most pronounced external differences. We are all part of the one human family. And we are one family because we all share a common origin, the Creator God. Thus we at the Global Peace Foundation believe that a simple yet powerful vision statement that can inspire our common effort to build a world of sustainable peace – is One Family under God.

The essence of our humanity, individually and collectively – and the essence of life itself – is intangible, and, we could say, spiritual in nature. We naturally and intuitively recognize that every person has value, has worth. That is why we make great efforts to save even one human life. Our value as human beings is imbued in us by the Creator. That, I believe, is a universal spiritual truth, not a religious statement or doctrine.

That innate spirituality is what the Dalai Lama calls our “humanitarian” nature. It is reflected in the words of then UN Secretary General Kofi Annan when he said “In the 21st century, I believe the mission of the United Nations will be defined by a new, more profound awareness of the sanctity and dignity of every human life, regardless of race or religion.”

More than political, economic or military power, the power that can transform our world is the power of the human spirit. It is the human spirit that aspires to greatness, that can overcome even the most serious obstacles, and calls forth the noble qualities of our character.

If you adopt the framework of moral and innovative leadership, you are choosing to guide your path by the compass of time-honored truths, while you make full use of the tools of the 21st century. You can be leaders with integrity, who at the same time engage with personal and collective creativity to develop innovative solutions for our challenged world.

Let a noble vision guide your steps. Place your motivation on the highest plane. Tap your entrepreneurial and innovative spirit to dream big and act big – to build a world free of conflict and corruption, free of poverty and disease, and filled with opportunity and well-being for every member of the global human family.

Again we are grateful to the Paraguay Mission and co-sponsoring missions here at the United Nations, for hosting this very meaningful Assembly.
Thank you for your kind attention.