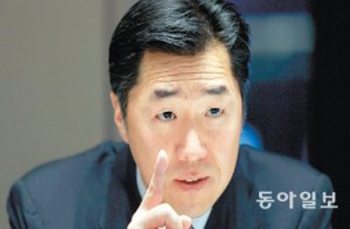 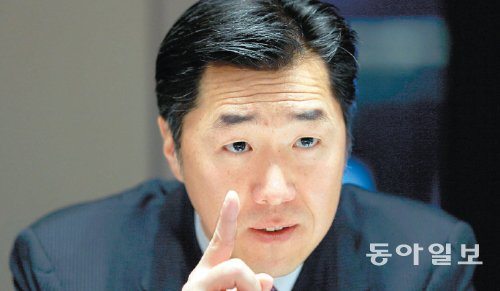 Dr. Hyun Jin Moon, Global Peace Foundation International Chairman and UCI Group President, was interviewed last month during his visit to Seoul. He did not hesitate to answer any question and spoke eloquently. In high school he was a top football player and was a member of the Korean national equestrian team during the 1988 Seoul Olympic Games and 1992 Barcelona Olympic Games.Photo Courtesy of DongA Daily: by Hyuk Joon Choi, sajinman@donga.com

In early June, DongA, a top Korean daily newspaper, published a feature story of Dr. Moon, chairman and founder of the Global Peace Foundation. The article focuses on Dr. Moon’s approach to North and South Korean relations. It also tries to explore the roots of his convictions: his thoughts on the Declaration of Independence and the ancient Korean philosophy of Hong Ik Ingan as a foundation for unity between the two Koreas, his approach to business and spirituality, and his relationship to his father.

Below is an excerpt from the article by Moon Myung Heo,  angelhuh@donga.com

Dr. Moon is a big and tall man. He said, “My Korean is not that good, and English is better for me,” so a GPF official translated for him.

―Do major powers like the U.S. and China genuinely want the reunification of the Korean peninsula?

“First of all, it is important to understand that the U.S. never imposed diplomatic policies on the Korean peninsula. The U.S. has always followed South Korea’s lead. The Chinese are reasonable people.  The Western World has a short history relative to China that boasts a 5,000 year history.. These are issues of trust with Japan. Thus, it seems China can have better relations with Korea than with Japan or the U.S.”

―What could possibly be the reason for the change in the global situation?

“It is because of the North Korean nuclear program. The global community has realized that the reunification of North and South Korea is the way to deal with the nuclear issue and bring stability to the Korean peninsula. You know that North Korea supports the nuclear program in Iran. North Korea’s nuclear program is closely related to western society’s war on terror. Northeast Asia is one of the most volatile regions in the world, and crucial for the security of the global economy. If a conflict breaks out in this region, it is highly likely that it will spread to the entire world. Global security in the 21st century begins with security in Northeast Asia. At this pivotal juncture, Koreans must seriously think about their own fate.”

― They are giving a serious thought to it.

“I do not think so. The conservatives and liberals within Korea warned me ‘Korean people are not interested in reunification,’ particularly youth.  Some suggested that I should instead deal with welfare issues since they are more interested in that topic than reunification.”

―At this point, he mentioned that ‘Mongolia’ is a key nation.

“The Six-Party Talks create a 3-on-3 situation, which always brings trouble. I suggest that Mongolia be included as the 7th member nation. Mongolia is on good terms with China and Russia. They used to belong to the Soviet bloc, but successfully transitioned from a communist to democratic nation without bloodshed. They have embassies in North and South Korea respectively. Historically one of Genghis Khan’s favorite wives who accompanied him during his conquests was the princess from Korea.”

―To achieve reunification, North Korea has to change.

“You can think of North Korea’s situation as a cup half full or half empty. One of the problems of politics is that it pursues only short-term policies. Korea’s Sunshine Policy brought positive results but also created problems. It was unable to create a national vision that went beyond regimes. They had provide a vision that inspired the leader of North Korea. The biggest error in South Korea’s North Korea policy is that it has been Korea-centric.”

― At this point, I want to ask you a basic question. Why should Korea be reunified?

“Koreans have a destiny that begins at the founding of the nation. When I studied history in college, I was highly impressed by the 5,000-year history of Korea. The Korean founding mythology of Dangun and the philosophy of Hongik-ingan assert that Koreans are endowed by Heaven with responsibility to live for humanity. What is essential in leadership is moral authority. It is a great blessing that Koreans are given a national mission to live for humanity; and it is a position that holds incredible moral authority.”

I was very surprised that a Columbia graduate who spoke fluent English, dressed in a smart suit was talking to me about the ‘Dangun Mythology’ ‘Hongik-ingan.’ He continued.

“The U.S. rose to global power because the nation was founded upon fundamental principles of human rights and freedom described in the Declaration of Independence. But the Korean people were already advocating  principles and values that are essentially connected to the concepts of modern human rights and fundamental freedoms 5,000 years before. If we examine the spiritual heritage of the Hongik-ingan philosophy, we might discover a DNA that can resolve religious conflicts that have escalated into a global war on terror.”

When I asked again, “So are the benefits if Korea is reunified,” he  said what you might expect from a Harvard MBA graduate, words like ‘innovation’ and ‘creation’.

“In terms of investment and its consumer market, South Korea is already saturated. North and South Korea speak a same language, share the same culture, history and identity.  From a business perspective, it is a great asset that a developing country is located just to the north (post reunification). Korea can become a top 5 nation. Apple stocks are in decline in the U.S. The new Smart Phone is Samsung’s. Koreans strive for excellence and are very self-reliant. Japanese like to go in groups, but Koreans want to be the master, taking charge. Thus they are well suited for entrepreneurship, innovation, and creativity. If a strong concept like national destiny can be infused into them, they will be able to seize the opportunities which are made possible through reunification and the position of leadership which Koreans can acquire.”

“If I talk about spiritual principles and values, people think I am evangelizing, but that is not it (Laughs). Most people think that a man of religion or a man of faith can only be active within the boundaries of faith, but that is not true.  Major reforms in every society throughout human history were sparked by a vision and principles that impressed people. These are spiritual values. North Korea’s Juche Idea is more like a religion than a philosophy. Religious leaders nowadays want to advocate their own faith and belief exclusively.”

― Are you saying you want to create a new religion?

“No. I have no such intention.”

― You are also a business man, but is it possible to make money based on spirituality?

“Business activities generate value through profits. Spiritual activities enrich our lives and add a meaning and purpose to our lives. Sometimes these two areas overlap each other, but based on my experience, it is more beneficial that they have their own purpose.”

― How can you maintain these separate purposes and be successful at the same time?

“I believe the biggest value can be created through moral and innovative leadership.”

His answer was not concrete, but rather abstract and puzzling. I felt a sense of genuineness in his expression and his voice, yet he also seemed to impress upon me that he would only show me what he wanted to show…

“The so-called conflict within the Unification Movement is rooted in contending views on the purpose and direction of the movement.  My siblings were unfortunate pawns set up to fulfill the nefarious purposes of some bad leaders. As a man of faith, I believe these conflicts will be resolved in due time.”

“Just like the title of his autobiography, he was a ‘Peace-loving global citizen.’ As a deeply patriotic Korean, he recognized that Korean people have a special role to play in God’s providence for the sake of all humanity. His work went beyond denominational and religious interests, spanning politics, business, NGOs, academia, culture, arts, sports and media. He always told me that he was willing to sacrifice the Unification Church for the sake of Korean Unification and world peace.  Now that my father has passed, I hope that he can be understood correctly without the biases and misunderstanding that surrounded his incredible and momentous life.”