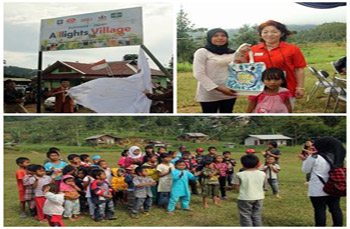 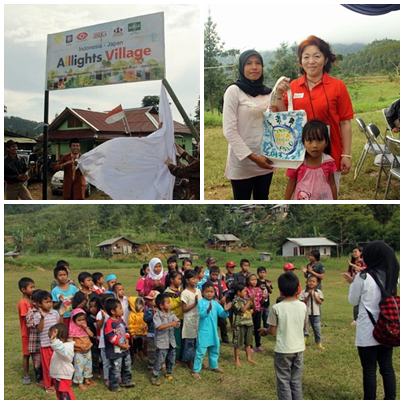 Top left: A ceremony designating Paseban as an All Lights Village; top right: presenting a hand-painted eco-bag; bottom: children sing the Indonesiannational anthem at the arrival of the Japanese delegation.

Ten delegates representing GPFF Japan arrived at Jakarta International Airport in Indonesia on January 28, the first stop on a journey to the village of Paseban in the mountainous region of Mega Mendung, some 70 kilometers south of Jakarta, to present the remote community with a gift of solar-powered lanterns.

Jakarta had just recovered from a flood inundation that displaced 20,000 people. Cancellation of the tour was imminent, but the state of emergency ended on January 27. Delegates were then blessed with good weather and moved on to a hotel in Puncak, Bogor, where they met with GPF Indonesia Foundation’s staff and volunteers on the following day.

On January 29, the Japanese delegation and local volunteers traversed the rugged terrain outside of the historic city of Bogor and arrived in Paseban by mid afternoon. Village leader Entis and 50 families welcomed them, and children sang the Indonesian national anthem in their honor. The unveiling ceremony of All Lights Village sign board drew general applause, and Paseban was confirmed as a new All Lights Village.

Top: GPF Japan President Mr. Aya Goto thanks
villagers for the warm welcome; middle and
bottom: solar-powered lanterns were presented to
villagers, who have limited access to electricity in
their homes.

As part of a sisterhood accord between the Japanese and Indonesian families, each Japanese volunteer was partnered with a group of families, and the Japanese guests visited each family’s home.

Houses in Paseban are made simply of wood, with walls of weaved bamboo. The furnishings are spare, with little other than mats for sleeping. With the village depending only on hydroelectric generators, people use only very small light bulbs in their homes, which are insufficient for their daily living.  When the river doesn’t produce enough current to run the generator, villagers are left without electricity.

Villagers explained that it takes more than an hour for children to walk around the mountain side to attend classes, and when raining, children cannot go to school.  Due to these difficult conditions some parents don’t have the means to enable their children to attend school.

Following home visits, the village leader again formally welcomed the visiting delegates, expressing deep appreciation for their support, especially their effort to travel to a rural village in Indonesia.

Representing the Indonesia’s largest Muslim organization, Nahdulatul Ulama (NU), NU Bogor Chairman KH Romdon told the guests, “I am feeling ashamed because the Japanese people came to know the situation of this village and decided to support it earlier than I myself. I will support the village for its development together with GPF.  For this purpose, I promised that NU will provide scholarships to your children to study at NU’s Islamic schools.”

GPFF Japan Chairman Mr. Aya Goto responded that the delegates deeply appreciated the heartwarming welcome. He said the All Lights Village Project aids in community development through providing Solar-Powered LED Lights to help children study even after sunset.  He said that GPFF Japan believes that this light in the home will be a light of hope.

Mr. Goto added that Japan actually owes a lot to Indonesia at the time of the earthquake and tsunami disasters two years ago. “Indonesia took immediate action to contribute to the disaster relief operations,” he said. “It is a custom among Japanese people that when they receive something, they thankfully give something back in return.”

The region of Puncak where the village is located is a resort area where wealthy Indonesians and foreigners own villas.  However the poor villages surrounding the resort areas have sometimes serious social problems, such as hidden human trafficking related to arranged marriages in which poor families give their daughters in return for a meager monetary support. Therefore, livelihood and entrepreneurship programs are critical to enhance economic opportunity. 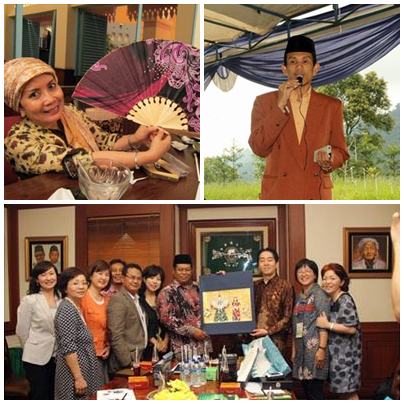 Another supporter, business owner and writer Ms. Halimah Munawi, recently finished a community center in Tarikolot, a village near the All Lights Village site, which can accommodate 100 people. Women learn for bamboo-crafting to provide a livelihood, and Ms. Munawi agreed to sponsor an entrepreneurship program in the Alllights Village as well.

At a welcome dinner at the Bogor region’s government building, Secretary Hj. Nurhayanti, speaking on behalf of the governor, told the delegates, “Community development requires enough provision of electricity. There are many areas which don’t have ample electricity.  I appreciate the Japanese volunteers to their support in communities for providing the LED lights.”

On Jan. 30, delegates attended an exchange program at Trisakti Institute of Tourism, which has been supporting GPF international programs since 2010.  They later visited Nahdulatul Ulama headquarters building and met with Secretary General K.H. Marsudi Syuhud and three ministers, who shared about NU’s vision and programs.

NU was founded in 1926 and is the largest Islamic organization in the world, currently with 70 million members and more than 210,000 schools.  NU also has branches in Japan as well as other major countries.   “NU envisions building a peace beyond any differences,” Secretary General Marsudi told the guests, adding that NU’s schools will never produce even one Islam extremist.  “Wherever you go in Indonesia,” he said, “I promise that NU leaders will support you.”

The All Lights Village Project Support Tour provided LED lights to all families in Paseban Village in Bogor, Indonesia.  Through the tour, GPF and GPF partners were able to deepen the commitment to support community development.  GPF Indonesia Foundation plans to monitor and evaluate the development of the village with university support.

This article was originally posted on www.globalpeace.org