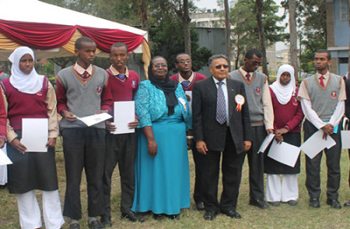 Global Peace Foundation reported the success of the Character and Creativity Initiative in Nairobi Secondary Schools. 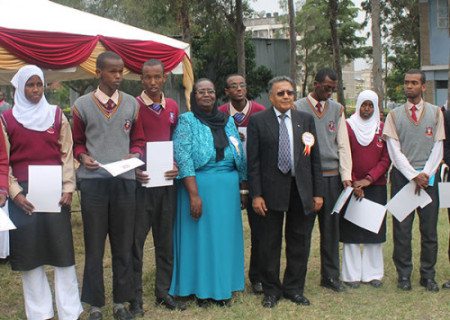 Dr. Manu Chandaria (center) with some of the school’s best-performing students.

In recognition of the successful implementation of GPF’s Character and Creativity Initiative at Maina Wanjigi Secondary School in Nairobi, the school welcomed GPF senior advisor and Kenyan corporate leader Dr. Manu Chandaria as the chief guest at a ceremony on June 26, 2013.

Addressing students, teachers, administrators, and dignitaries at the ceremony, Dr. Chandaria praised the Character Competency Initiative, which emphasizes qualities such as respect, personal integrity, and determination as part of the curricula, and said that plans are underway to engage the Ministry of Education to expand the initiative from 40 secondary schools to 400 secondary schools nationwide.

“Without knowledge and character, we will not have bright future as a nation,” Dr. Chandaria told the assembled guests. He had previously opened the event by formally inaugurating the school’s new administration block, which was built through the support of a Constituency Development Fund.

Hon. Wanjigi brought students and parents to attention when pointing out, “Luck is the extension of ability,” and “ability is the first child of discipline and determination.” He commended the good work that school is undertaking in guiding the students. And he thanked parents for entrusting their children to the school.

Hon. Hassan urged students to resist the appeal of drugs and criminal activity. He advised parents to be vigilant in monitoring their children and also pledged additional support in modernizing the school’s infrastructure. 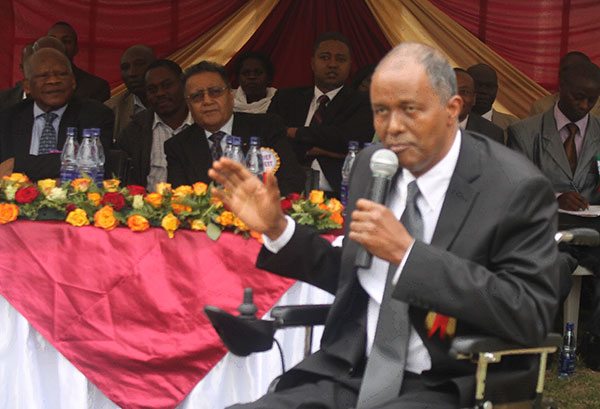 Hon. Yusuf Hassan, a Member of Parliament, encouraged parents to stay involved with their children.

The school was established in 1989 as a mixed day school to address the urgent needs of the surrounding community through basic education and literacy classes, and special programs to combat crime and drug abuse. In a testimony to the school’s impact since the school’s founding, a majority of graduates have continued their education at local and international universities.

This article originally appears on www.globalpeace.org.