GPF Recognized for Sustainable Development and Peace for Youth by UN 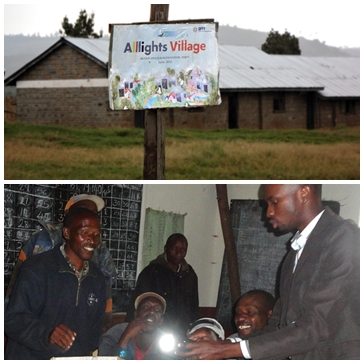 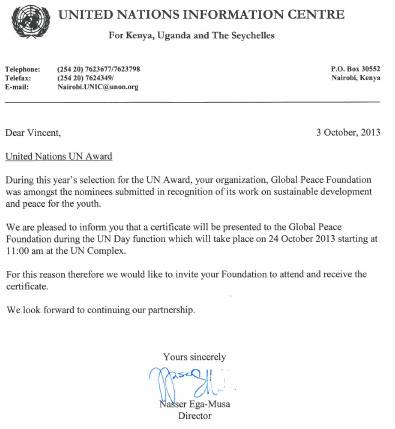 GPF received special recognition as a nominee for the UN Awards this year.

This year, the Global Peace Foundation was among organizations nominated for the UN Award for its significant contribution in sustainable development and peace for youth. They will receive a certificate on UN Day later in October.

Through other initiatives like the Character and Creativity Initiative, U-Gen, and the National Youth Summit, GPF has taken on the issue of youth empowerment. Avenues have been opened for youth participation in government, community engagement, and entrepreneurship, as well as cultivating 21st century job market skills.

A recent highlight of GPF’s ongoing investment into Kenya is Mutate Village in Molo of the Rift Valley.

Molo was at the heart of the post-election violence in Kenya in 2008. The violence burned down the village primary school and many homes. The village became deeply divided amongst tribes. Today, Mutate the Village is a hub of community driven development and reconciliation.

The primary school was rebuilt through the sponsorship of Global Peace Foundation Senior Advisor, and CEO of Comcraft Group, Manu Chandaria. His one condition was that the school teach members from all tribes. Mutate Village has also been the center of the Rift Valley Peace Initiative.

Last year, Mutate became the first All Lights Village in Africa.  100 solar-powered lamps were distributed to families of children attending Mutate Primary School, and solar powered street lamps were installed on the village streets. Service for Peace and Global Peace Foundation-Korea revisited the village in July to assess progress and map out the next stages of community development.

Timothy Gachucha of the Global Peace Foundation Kenya marveled, “I can’t believe how much change has occurred in the Mutate Village over the last year because of the solar lamps. It is encouraging to see how much the community has been able to accomplish.”

Health has markedly improved, especially for the children of the village. The fumes from the traditional kerosene lamps are particularly harmful for children, and caused causing asthma and lung disease.  A year later, many of these symptoms have decreased. 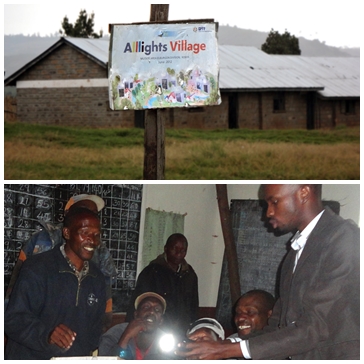 The All Lights Village in Mutate Village has shown remarkable developments in just one year.

Additionally the lamps have promoted education and literacy. Mr. Joseph Kimani, the Deputy Head teacher at Mutate Primary School told GPF,  “For the first time our school produced six students with over 300 marks in their Kenya Certificate of Primary Education exams while there was only one last year.” Teachers are now able to assign students homework which students can complete by the light of their solar-powered lamps.

Moreover, money formerly used to purchase kerosene can now be invested into other things that improve the quality of villager’s lives.

The solar-powered lights are only the first stage of development for the village. The essential point is that the villagers are the ones who are driving it. The next phases include improving access to education, developing livelihood, and cultivating community ownership.

Service for Peace and Global Peace Foundation expressed their long-term commitment in creating a model All Lights Village in Mutate.

Such ongoing efforts are empowering the people of Kenya to secure stability and development for their country, as well as rise to become a model nation in East Africa.

The original report appears on www.globalpeace.org.