Representatives from faith communities, government agencies, community organizations and academic institutions attended a forum highlighting the critical role of women of faith in peace-building. Ms. Diann Dawson, a, child welfare advocate, human services consultant and former federal official at the U.S. Department of Health and Human Services served as the moderator for the forum held at the U.S. Capitol.

Shinsook  Kwak-Kim, Global Peace Women Secretary General told participants, “The ability of women to perceive the intangible aspect of life, the unspoken emotions, the characters of each person, the spiritual dimension, is part of what makes women especially valuable for the work of building peace.” She clarified, “Lasting peace is a state of heart, manifested in action, putting the benefit of others first.”

Gail Hambleton, Vice-President of Global Peace Foundation- USA gave a poignant example that illustrated Mrs. Kwak-Kim’s point. During the genocide in Rwanda, a Hutu gang arrived at a school for girls and demanded for the Hutus to be separated from the Tutsis. The students refused to be separated, clinging to each other and their teachers. “To end identity-based conflict we need to recognize our common humanity, a shared identity that is prior to any ethnic, religious or gender status,” she said as she honored the girls’ example as peacemakers. 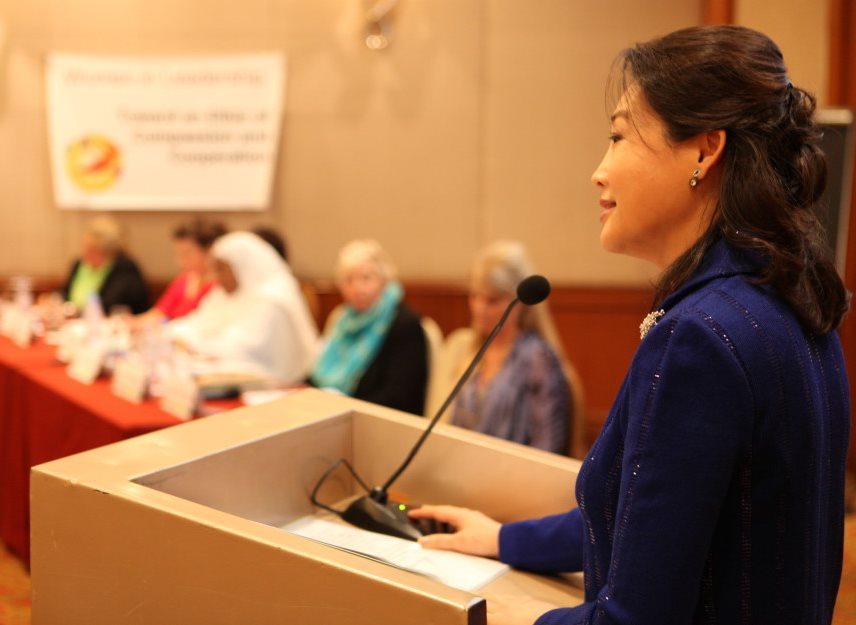 Ms. Etmadi, Vice President of the Muslim Women’s Association described the vast role of women in peace-building.  Not only do they play roles as leaders in faith, community and politics, they play essential roles in creating peace in the home.  “As traditional caretakers, as mothers and healers, women can play a major role, in the context of their culture, when they regain their confidence.” Her work for peace, justice and women in nations such as Afghanistan has shown political and religious divisions have left women without a voice.

The advice that Dr. Jun Sook Moon, Chairwoman of Global Peace Women and wife of Global Peace Foundation chairman, Dr. Hyun Jin Moon, offered during the special session on women in peace during the Global Peace Convention in December last year, offers a concrete illustration of how peace-building can begin at home.

To the women she said, “Please appreciate your husband. Love him, tell him you love him, you really appreciate the efforts that he does for his home and children. That will give him strength to do better when he goes out.

She concluded, “When we all do that as husband and wife that is going to be the greatest start to make peace, and eventually it’s going to bring peace all around the world.”

As mothers, sisters, daughters and wives, women are powerful agents of peace, in both their personal and public relationships.

As Ms. Hambleton told the forum, “We have a role as women in peacekeeping and we need to step up and take our place at the peace table. Because after all, who usually sets the table?”

Global Peace Women is a division of the Global Peace Foundation, which is a convening partner of the Strengthening Families and Communities Coalition.

This post is an adaptation from the report that first appeared on www.globalpeace.org.