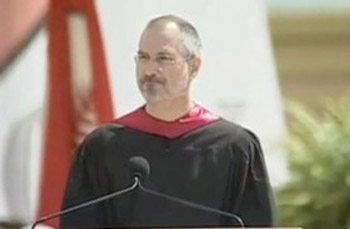 “Every culture has examples of extraordinary men and women who propelled humanity forward in the fields of philosophy, ethics, the sciences, athletics and the cultural arts. They have challenged existing paradigms by exercising their God-given talents.” Dr. Hyun Jin Moon

Steve Jobs delivered the commencement address at Stanford University in 2005.

During a recent interview, a reporter mentioned Steve Jobs as a role of young Korean entrepreneurs. In response, Dr. Moon listed  essentials values of successful innovators.

First is living for the greater good.  The great innovators of our time were not motivated by money, fame or prestige.  They were driven by the simple desire to make a difference in the world. We all want to make a contribution to humanity. Our dreams are part of how we will make an impact.

In 2005, Steve Jobs gave an unforgettable speech at Stanford University’s commencement. He told the graduates “Your work is going to fill a large part of your life, and the only way to be truly satisfied is to do what you believe is great work. And the only way to do great work is to love what you do. If you haven’t found it yet, keep looking. Don’t settle.”

Steve Jobs wanted to improve the world, he did it through technology.

Second is to own that dream. Even a grand dream remains a pipe dream without ownership. When pursing a dream challenges are guaranteed, setbacks are an absolute.  The results are hidden around the corner from the turbulence.

At one point in his career, Steve Jobs was fired from Apple, the company that he had co-founded. Without success and position, he told the graduates, “something slowly began to dawn on me – I still loved what I did.” So, he started over. He said it was “one of the most creative periods of my life.”

There are people who set out to make a difference but back off once success comes to live happily ever after. They are not remembered. Those who are remembered are the ones who stick to their dream through success and failure.  A successful innovator owns their dream.

Third is teamwork. A successful innovator can create a team around their dream. Success is never the result of one person. Success comes with the help of many people along the way. Leaders can draw people and organizations to a common objective, and bring out the best from them.

When Steve Jobs passed away in 2011, Apple issued the following statement, “Steve leaves behind a company that only he could have built, and his spirit will forever be the foundation of Apple.” Steve Jobs was able to build a team of committed, inspired and motivated people who shared his dream to make the world better through technology.

Fourth, is dreaming big dreams. The capacity to dream big is one of the most important components of life and accomplishing anything that is worth noting. Small dreams for the ancillary products of larger dreams fizzle out.

In the same Stanford address, Steve Jobs said, “Follow your heart even when it leads you off the well-worn path, and that will make all the difference”

Successful innovation has to be rooted in a desire to serve the greater good through an ambitious dream that one refuse to let go of and can draw others to it.

It is fair to say that the modern world with its greater freedoms and advancements has benefited greatly from these innovators.