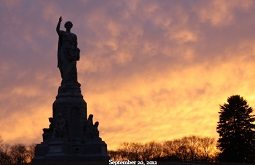 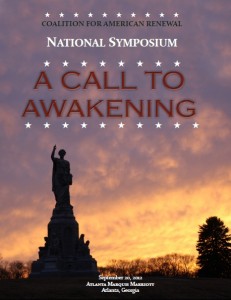 The Coalition for American Renewal is a national leadership network dedicated to renewing our vision and empowering our citizens to build an America that lives up to its founding ideals.

Dr. Moon wrote, “America is meant to be a living demonstration that all people of the world are to be one family under God.”  What has made America great, he observed, is its spiritual legacy enshrined in the Declaration of Independence. He urged participants to help America fulfill its role by “engaging, organizing and mobilizing people of faith and conscience in grassroots initiatives that put our principles into action.”

Interfaith through putting faith into action was a common conclusion.  Rev. Robert Thompson, Chair Emeritus of the Parliament of World Religions said, “No matter what we think or what we say we believe, what we do is our real religion.” He observed that although no two religions are alike, there are common principles like the Golden Rule that appear in in every faith tradition.

Rev. Robert Woodson of the Center for Neighborhood Enterprise has worked in the toughest neighborhoods in the United States tackling issues like gang violence, drug abuse and prostitution. “The superiority of your principles and beliefs has to be shown by producing a superior way of life,” was the wisdom he imparted to participants.

Ms. Barbara Metzler, an expert in volunteering, nonprofits, and philanthropy, shared stories of “passionaries,” a term she coined to describe people of faith who put their compassion into action, to illustrate how one person’s passion and conviction can change the world.

Co-Chairs of the Coalition for American Renewal, Dr. Robert A. Schuller and Dr. Paul Murray, closed the conference with a commitment to continue dialogue and cooperation, and make CAR “the voice of leaders of faith and conscious” in the public square during this “defining moment” for America.