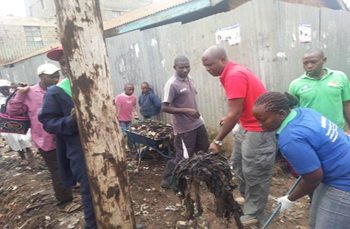 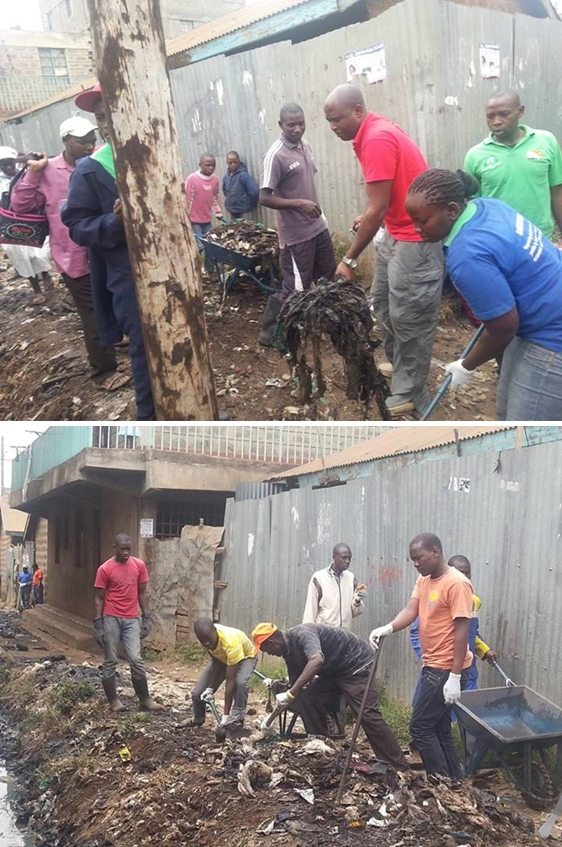 Daniel Juma, Executive Director of GPF-Kenya with youth from Kariobangi shovel garbage out of ditches during the city-wide Clean-up Day.

There’s a new Saturday trend in Nairobi. On June 29th, the Nairobi City Government announced that ever last Saturday of the month is a city-wide Clean-up Day. Residents are encouraged to clean their neighborhoods together. This is the most recent effort to improve the quality of life in Kenya’s capital city.

GPF reported that on the last Saturday of August, Global Peace Foundation joined youth members in Kariobangi, a lower income district in northern Nairobi for Clean-up Day. Daniel Juma, executive director of GPF-Kenya said the project goes much deeper than cleaning; it’s about “the dignity of the African people.”  Clean-up day is telling evidence of Africa’s move towards community driven change. Native leaders are starting to drive progress.

In 2010, Dr. Moon visited Kenya for the Global Peace Convention. He observed:

“Many in the developed world are trying to make their mark on this continent, either through economic incentives, humanitarian aid, or even historic and cultural precedents harkening back to the age of colonialism. These forces have definitely shaped the current state of affairs on this continent but have no bearing on what could happen in the future.

2010 should signal a new decade of African leadership from local communities to the national halls of government to the four key regional corners of Africa where a new breed of leaders, motivated by a common vision rooted in universal principles and values rise to shape the future of this continent and, possibly, the world. “

GPF-Kenya has spearheaded efforts to raise and engage moral and innovative African leaders through projects such as the Character and Creativity Initiative, Leap Hubs and the All Lights Villages development project.

More significant than the scale or number of projects, however, is the transformation of native leader as they work to make their nation, their continent a model for the world.

“Whatever you do, small, large, medium, do it to the best of your ability. Leadership isn’t about being on the highest mountain, or having the loudest voice, it’s about doing that particular thing that you have skills for so well that everybody stops to look.”

Clean-up Day is rallying small acts of service in Nairobi. The results may exceed cleaner neighborhoods and a higher quality of life. Placing the responsibility of national and continental development may be the beginning of a new generation of local African leaders.