Atlanta Declaration on the Future of Hemispheric Relations 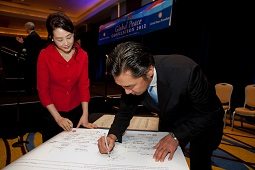 We, former Heads of State and leaders of numerous nations and public and private organizations and enterprises in Latin America and the United States of America, gathered at the Global Peace Convention in Atlanta, USA, from November 29 through December 1, 2012, affirm that this is a historic opportunity for Latin America, North America, and the Caribbean Basin to begin a new era in its relations, leaving behind a past marked by discord and lost opportunity. 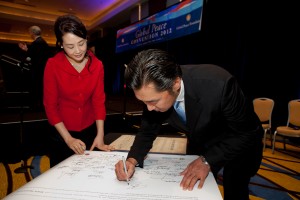 A new era, guided by tolerance, respect and solidarity, will finally change the Americas into the continent of promise that the great American patriots, North and South, dreamed of, and for which many sacrificed their lives. Neither self-interest nor entrenched methods or practices must thwart this destiny.

We recall, with deep respect, the Preamble of the Declaration of Independence of this noble land that welcomes us: “We hold these truths to be self-evident, that all men are created equal, that they are endowed by their Creator with certain unalienable Rights, that among these are Life, Liberty and the pursuit of Happiness.¨ We claim these principles as a heritage of all mankind.

As leaders of government, industry, academia, and faith traditions from throughout the hemisphere and gathered in the cause of peace and equitable development, we advocate the following:

First
We reaffirm the Declaration of Asuncion (Paraguay), of October 21, 2010, in full. It is a summary of our original purpose and the base that guides our efforts. In it, above any ideological conviction or religious profession, it was agreed to “ratify our faith in the Creator, who endowed the human being with unique value and dignity” and affirm the need to “revive the values and civic virtues that reflect the best spiritual, democratic and pluralistic traditions of humanity in the continent and in the world.”

Second
Recalling the courage and fortitude of the Pilgrims of the Mayflower, the Founding Fathers of the U.S., and the heroes of the Independence of Latin America, we reaffirm that the freedom and order that support democracy and the republican system require the highest ethical and civic virtues from every citizen, especially from those who are responsible for the administration of public affairs in each state.

Third
We affirm our total commitment to oppose the return, in our hemisphere, of any kind of dictatorship or authoritarianism that undermines freedom and the full development of humankind. Similarly, we oppose all forms of violence or discrimination toward those professing different beliefs or for belonging to a certain class, nationality, sex, religion or political party.

Fourth
We affirm that in these times of heightened economic uncertainty, Latin America and the United States of America must strengthen their ties – based on mutual respect and pursuit of the common good – through trade, investment, and exchange of experience and technology to achieve lasting results.

Fifth
We affirm that a quality education is a vital prerequisite for personal well-being, prosperity, and social cohesion, and fundamentally includes moral character education. Through quality education, citizens must be intellectually and ethically prepared to provide services, creativity and progress for the welfare of their societies.

Sixth
We affirm that the unity and integration of the Americas must be based on the recognition and respect of unique national and cultural identities, and that efforts should be directed at obtaining not personal advantages but a common advantage.

Finally, we urge all Governments of the Americas to encourage the pursuit of social and economic opportunities as a continent, affirming a sense of community as citizens of the Americans without subjugation or hegemony, to make the dream of freedom, equality, prosperity and peace in the Hemisphere come to life.

In support of the Declaration of Asuncion and by our signatures below, we endorse the newly created Latin American Presidential Mission, comprised of former Latin American presidents, assisted by leaders throughout the continent in a commitment to turn dreams into realities, through leadership, experience and action.

May our consciences and hearts guide our thinking and action, and may the welfare of the people be the main purpose of our efforts, for the Americas to be a light in making the world One Global Family under God. 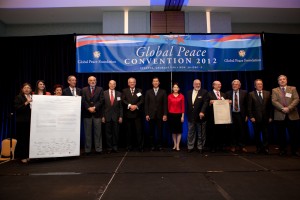