All Lights Village in Kenya Featured in The People 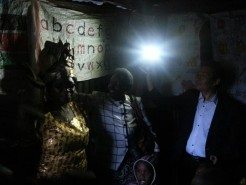 President Yoo holds up a solar powered LED lamp that lights up a local primary school in Kairobangi.

At the start of 2013, Global Peace Foundation expanded the Alllights Village Program to Kenya and Uganda. It is timely as the Kenya government moves forward with the “Kerosene Free Kenya” programme following its commitment at Rio 20+ in 2012.

The All Lights program provides solar powered LED lamps to developing regions in the world to promote health, literacy and ecologically sustainable development.  As GPF-Korea President Kyung Eui Yoo pointed out at the Kenya launch, the project is aiming for long term development and ultimately world peace.

The Alllights Village Project does not seek to merely provide lanterns to those in need. This project seeks to help local leaders change the mindset of the residents and help them overcome poverty. We are working together to develop economic independence and community driven development to secure the happiness of all the residents. It is like the Saemaul Undong (New Village Movement) of Korea in the 1970s. In the future, it will expand into a Saenara Undong (New World Movement) that will secure peace that transcends race, religion, and nation.

The program began in Kaiobangi and Kibera and now has expanded to Mutate in the Rift Valley.

Recently The People interviewed the African project coordinator Juyong Kim on the benefits and aims of the All Lights Project in Kenya.

Read the story below.

Lighting up Lives with Solar Lanterns 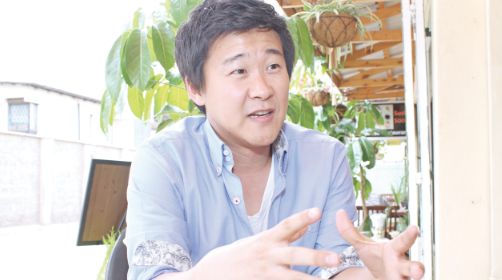 Solar energy is slowly gaining acceptance in Kenya as a renewable source of power. Statistics indicate that 68 percent of the Kenyans depend on firewood and kerosene while a paltry two percent use solar technology despite of the numerous merits it offers. Despite this, 75 percent of Kenyans, especially in rural areas rely on kerosene lanterns for their lighting despite the documented evidence of the health risks those who use these expose themselves to.

To promote the use of solar energy in Kenya, a group of Koreans through a global foundation has come up with a project dubbed ‘All lights programme’ that lights up the lives of children and communities living in the poorest of conditions in Nairobi and parts of Rift Valley. “Light cannot only be used for the purpose of sight, it can also promote peace, cohesion and unity among communities,” says one Juyong Kim, the project coordinator for three countries representing the Global Peace Foundation (GPF).

The foundation started its work in Kenya three years ago. Targeting a specific group of victims widely affected by the Post Election Violence witnessed in Kenya in the 2007/08 period, GPF initiated the programme that saw students, families and communities receive solar powered lanterns that apart from providing light played an important role in bringing communities together.

“We started the project late in 2010 after realising that children were not able to effectively go about their education due to the harsh conditions they lived in. We needed to do something for humanity as these were potential lives going to waste,” says Kim. The South Korean foundation brought in the solar lanterns to Kenya with three main agendas – reducing illiteracy levels, minimizing or completely eradicating health related issues and protecting the environment.

“Most poor families use wick lanterns due to economic constraints, oblivious to the health hazards they are exposing themselves to. But they have no other option. That’s why we saw the need to come in,” explains Kim. They started their work in Kariobangi and Kibera and expanded to Mutate area in Molo Region of El-Burgon in Rift Valley.

The programme has already benefited 150 families. “Children from these families need not to worry about catching up with their studies even in the evening. Their parents can also operate their businesses even as night falls and this is good for the economy,” reckons Kim. The solar powered lanterns are state of the art devices manufactured in South Korea.

They require to be charged for a maximum of five hours with the energy capable of serving its user for a maximum of eight hours into the night. The Alllights programme is fully funded by the people South Korea and one lantern costs about going for about Sh2,610 ($30).

However, the foundation has an agreement with the manufacturers who sell the lanterns to them at a more subsidised rate. With the pilot project having being launched in Kenya in 2011, GPF seeks to run a five year programme where they intend to bring in the solar powered lanterns to the country with plans already under way to install solar powered street lights in poorly lit areas in the country.

Daniel Juma, Executive Director of GPF-Kenya also recently was interview on KNTV on All Lights Village.