A Grassroots Movement for Peace in Ireland 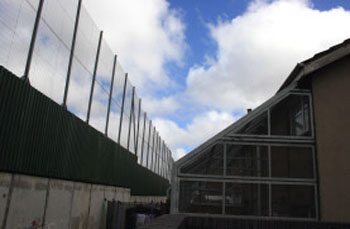 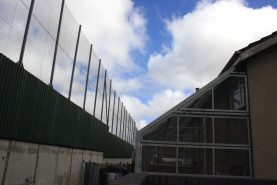 A peace wall along Bombay Street. Backyards are protected from occasional outbreaks of violence. Credit: Supermac1961

Unsteady peace has held in Ireland for fifteen years, but there are still painful reminders of the violence and discrimination that ripped across the Emerald Isle propagated by political, religious and national differences.  Thousands of lives were taken in the conflict that subsided only fifteen years ago with the Good Friday agreements.

Today the Northern Ireland border is lined with “peace walls”, built to temporarily keep the communities safe and apart. Although murals now adorn many of them, making them popular tourist attractions, they also speak of outstanding hostilities and fear.

An article by Sky News on the British government’s announcement to tear down the walls within the decade reported the reticence of the communities living on either side of the wall. One man from west Belfast said, “We need to deal with the mental barriers here before we can think about removing the physical ones.” Another man adds, “The people, rather than the politicians or paramilitaries, will decide when it’s the right time to remove walls.”

This is true both legally and socially.

The will and cooperation of the people were rallied on both sides of these walls for the passing of the Good Friday Agreement. Prior to its issuance, two referendums were held, one in Northern Ireland and one in the Republic of Ireland. At the time, a majority in Northern Ireland voted to remain as part of the United Kingdom, but a significant number of Irish expressed a desire for eventual unification on Ireland.

The multi-party agreement that engaged both government and political parties, outlines that should the majority opinion change, both governments are duty bound act in accordance to that desire.

Furthermore, the treaty asks that each governing body exercise “rigorous impartiality on behalf of all the people in the diversity of their identities and traditions.” It outlines the principles that should define the sovereign political structures:

–          full respect for, and equality of civil, political, social and cultural rights

–          freedom from discrimination for all citizens and parties

–          esteem and just and equal treatment for the identity, ethos and aspirations of both communities

Fifteen years has passed since the Good Friday Agreements, but progress has been slow. Perhaps, as the man from Belfast expressed, before political and economic integration, movement should be made to tear down the “mental walls” that have been erected from decades of suffering, starting from forming a shared aspiration that transcend the divisions north and south.

Just as the Good Friday Agreements is built upon grassroots engagement, so should continued peace building