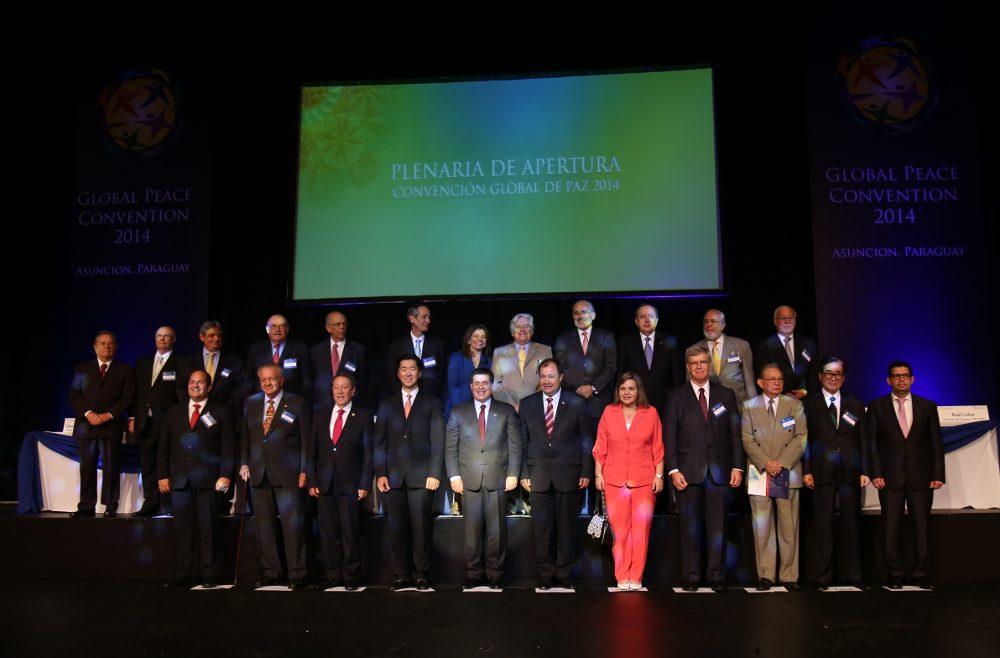 Roadmap for National Transformation: Liberty Prosperity and Integrity through Moral and Innovative Leadership 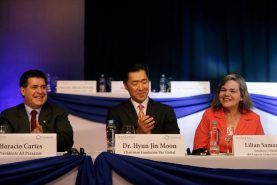 More than 1,000 government, civil society and faith leaders from 40 nations assembled in Paraguay for a challenging debate and action agenda for national transformation in Paraguay, Latin America, and the developing world.

In his introductory remarks, Dr. Jose Altamirano, the President of the Instituto de Desarrollo del Pensamiento Patria Soñada (IDPPS), a GPF supported research institute and co-sponsor of the Global Peace Convention, noted the movement away from “Madisonian” republican democracy toward a “Jeffersonian” direct democracy, and the critical need of an informed citizenry and moral leadership if democracy is to realize the promise of freedom and prosperity.

He said we all share the desire for good and aversion for bad, “but it is not okay to use any means to fulfill desires. To avoid justifications for misuse of freedom and authority, we need moral leadership. It is time to say ‘enough’, time to demand what is possible and doable within what is responsible.”

Paraguay’s progress in recent years “shows the foundational importance of principles and values, and their translation into initiatives that promote social transformation, leading to greater political and social stability.

Dr. Altamirano also warned that when religion becomes an end in itself, it can justify any crime by asserting divine approval. “So many wars are waged in the name of God, but are really caused by rage and resentment.” 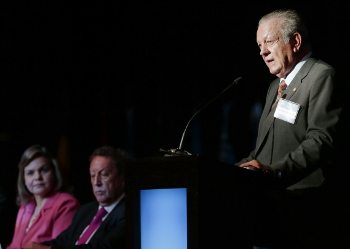 Former Paraguayan President Wasmosy, a founding member of the Latin American Presidential Mission, outlines the vision of the Mission.

Former Paraguayan President Juan Carlos Wasmosy greeted the international participants on behalf of the Latin American Presidential Mission, a co-sponsor of the Convention and a project of the Global Peace Foundation to engage former democratically elected presidents of Latin America who are committed to social development and political reform in the region.

President Wasmosy, one of the founding members, gave a brief overview of the origins and vision of the Mission. He said the first occasion for former presidents to meet was at a 2010 Asunción conference sponsored by the IDPPS, which issued the Asunción Declaration at the conclusion. The Asunción Declaration affirmed the desire of Latin American leaders “to revive the civic values and virtues that reflect the better spiritual, democratic, and plural traditions of humanity.” A later 2011 assembly in Brazil’s National Congress in Brasilia further underscored the principles outlined in the Asunción Declaration, and during this conference former presidents decided to establish a Latin American Presidential Mission. The mission was formally inaugurated in Atlanta, USA at the 2012 Global Peace Convention.

President Wasmosy also credited GPF Chairman Dr. Moon for emphasizing “the mentality of moral and innovative leadership, which should work for benefit of whole society and world, and be guided by universal values that can embrace the diversity of human family.”

In his keynote address, GPF Chairman Dr. Moon said that while many developing nations today are experiencing economic growth and greater democratization, they also face challenges of instability, inequitable development, and governments tainted by corruption. “How these challenges are met will have great significance for global peace and prosperity,” he said. 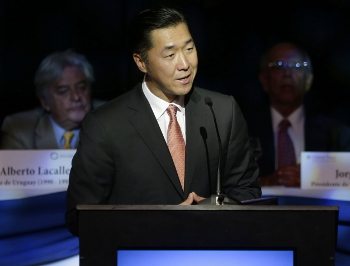 “Youth present a great opportunity for the growing economies of the developing world,” Dr. Moon declared. “Yet those energies need to be properly harnessed, and that is the challenge. It calls for education both in productive skills and in moral and civic virtues. That, in turn, requires tackling poverty and its cultural impact. The negative behaviors that poverty produces undermine social stability and thus impede progress toward equitable and sustainable prosperity.”

In his address he reflected on the social costs of material prosperity in many developed countries and said many nations are looking for alternatives to the Western development approach—“new  models of national transformation that can stimulate economic development and material prosperity without having to compromise spiritual and moral traditions or their roots in strong family values.”

Crediting the host nation’s progress in recent years, Dr. Moon said Paraguay “shows the foundational importance of principles and values, and their translation into initiatives that promote social transformation, leading to greater political and social stability. This in turn opens the door for sustainable economic development.”

The GPF chairman also related many of GPF’s social service, education, and economic initiatives in Paraguay that were guided by a vision of national renewal.

This historic gathering of former Heads of State touched upon many pressing challenges of ongoing poverty, organized crime, and political corruption in the region. But the former presidents continually spoke of the promise of youth.

Fourteen formers heads of state, joined by the sitting president and vice president of Paraguay, and representatives of the Global Peace Foundation, the Latin American Presidential Mission and think-tank IDPPS for a historic moment for Latin America.

”Latin America is the youngest continent,” observed former Guatemalan President Colom, reflecting the perspective of many of the presidents. “We should enable our youth to define their future. Latin American youth is our greatest treasure and if we don’t protect them from dictatorship and wars this region will go backward.”

The three-day Global Peace Convention includes panels in areas of interfaith cooperation, business as an agent of peace; community development and family strengthening; media’s role in promoting ethical societies; women and leadership; service and volunteerism; and developing a culture of peace through sports.

The Global Peace Convention concludes on November 21, with a Global Peace Awards gala honoring individuals in the areas of Interfaith, Family, Service and Scholarship.

The original article can be found at globalpeace.org