A recent forum hosted by the Center for International and Strategic Studies and the Global Peace Foundation highlighted South Korea’s growing role in global humanitarian development. In less than 50 years, South Korea has transitioned from a aid-receiving nation to and aid-providing nation. It’s exceptional story of economic development has been considered a new model for many emerging nations.

Below is the report posted on the Global Peace Foundation.

Amb. Kim said that the experience in assisting less-developed countries with health, education, and infrastructure projects provided lessons that would prove invaluable in assisting the economically backward North in the future. Per capita GDP in South Korea is 30-40 times greater than that in the North.

He said that KOICA’s work in former communist countries such as Laos and Cambodia could prove especially helpful as they showed North Korea a model for transition. Amb. Kim was speaking at a forum, “The United States, South Korea and Civil Society Cooperation in Global Humanitarian Development,” jointly sponsored by the Center for Strategic and International Studies (CSIS) and Global Peace Foundation. KOICA is now active in over 100 countries.

“This may be the first time Korea has introduced its work for global development in Washington,” D.C., Amb. Kim said.  He described Korea’s dynamic transition from an aid recipient with a per capita GDP in 1953 of $73 to an official donor country. In the fifty years after 1945 Korea received $12 billion in international aid, 44 percent of which came from the U.S.

“Many developing nations consider Korea an exemplary model for development. They are attracted by its focus on grassroots rural community development.” 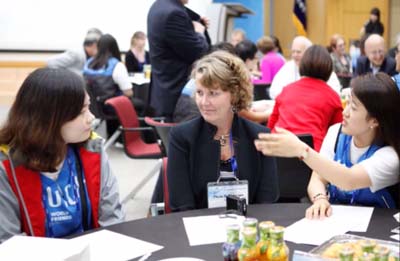 KOICA volunteers have worked together around the world with the Peace Corps.

KOICA has close working arrangements with the U.S. Peace Corps (above) as well as with USAID and UN agencies to support projects in 130 countries.

But Korea also learned to help itself, not only through a growing industrial sector in the 1970s but also through the Saemaul Undong or “New Village Movement.” This encouraged enterprise and self-reliance in rural communities. It balanced development there with the advances in the urban industrial sector and helped to limit income inequality.

Jon Brause, director of the World Food Program’s (WFP) D.C. office, added that Korea’s unique development experience, which includes a strong civil society element, is being recognized by other countries. “Korea gives nations the confidence to say ‘We can do it too.’” WFP has partnered with KOICA for 51 years. They are currently cooperating to implement Saemaul Undong in several African countries. 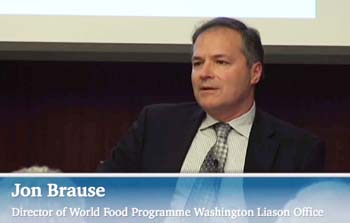 Amb. Kim stressed the importance of public and private partnerships for KOICA and for successful development work in general. Although KOICA does not work directly in North Korea it cooperates closely with a number of UN agencies that are active there and helps facilitate their work. KOICA also has close working arrangements on many projects with the U.S. agencies, USAID and the U.S. Peace Corps.In the private sphere, “KOICA is very keen to seek for innovative partnerships with prestigious global NGOs and foundations that will bring far-reaching impact,” he said. Domestically, KOICA has worked with civil society groups for 20 years to leverage resources and experience. It is engaged with 130 civil society partners. In 2013, Korea’s non-profit sector raised $3.8 billion to support 1,400 projects in 103 countries.

Such partnerships, public and private, domestic and international, would prove vital, said Amb. Kim, in “helping countries in transition or in transformation to succeed and finally achieve democracy and prosperity.”