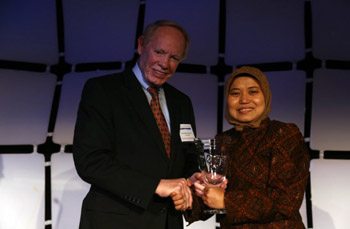 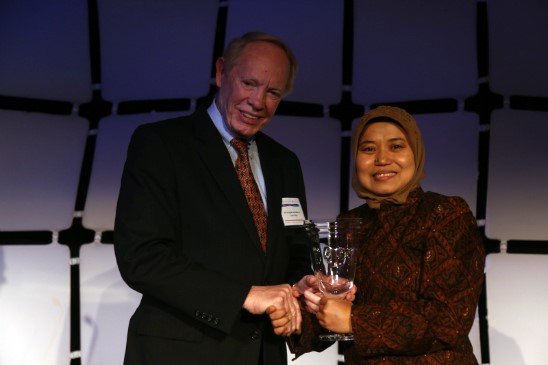 On December 1, 2012, the Global Peace Foundation presented Ms. Tri Mumpuni the Global Peace Award for Outstanding Social Entrepreneurship. Before introducing Ms. Mumpuni, Douglas Johnston, founder and president of the International Center for Religion & Diplomacy, asked for a moment of silence to honor Ms. Mumpuni’s mother, who had just passed on.  Ms. Mumpuni also paid homage to the lasting legacy that her mother, a social worker,  had bequeathed to her.  “My mother told me, that life is about sharing,” she told the audience of global leaders.

Among her other accolades, Ms. Mumpuni received the Ramon Magsaysay Award in August 2011 and in 2010, she attended the United States Presidential Summit on Entrepreneurship, where she expressed, “I got in my life so many privileges from God, this is the way to pay back.”

“My mother told me, that life is about sharing” Her mother taught her that life is about sharing, and she has in turn is teaching her countrymen the same. This principle is the simple brilliance behind the comprehensive model of power generation and village development that she has created. The government, local businesses and village residents are sharing the resources of nature together for the betterment of the nation.

The following is an article that first appeared in the 878th edition of the Weekly Donga as part of a seires entitled, “Ko Young’s Job Revolution” (Professionals who are changing the world), and later reported on GPF-Korea’s blog.  It is Ms. Mumpti’s story  bringing electrical power, self-reliance and most of all the desire to share with and care for one another from one village to the next  in Indonesia. 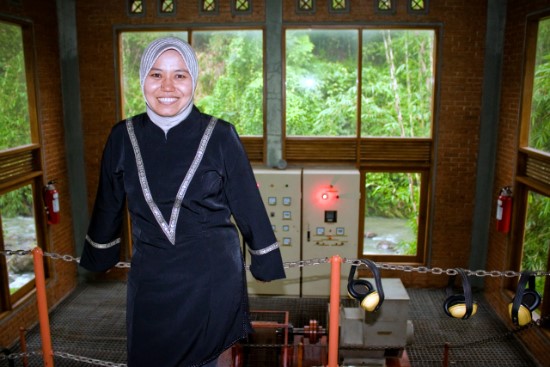 Tri Mumpuni introduced micro-hydro generators as a means to provide electricity to remote villages in Indonesia.

National characteristics are often influenced by its natural environment and resources. People who grow up in areas where they have to make infertile land fruitful tend to have strong and persistent characteristics. On the other hand, people who live on land rich in oil and mineral resources are likely to live without major worries, and tend to be easy going.

Indonesia has many barren areas but is also blessed with a variety of mineral resources. It is a MIKA  country, an acronym for Malaysia, Indonesia, Korea, and Australia, which are regarded as the rising nations post-BRICS (Brazil, Russia, India, China, and South African Republic).

Nevertheless, Indonesia consists of 17,500 islands. It would take an astronomical amount to build up its industrial infrastructure. Presently, 90 million people, about 35 percent of the entire 240 million people, live in homes without electrical power. By 5 pm the production line at factories and plants come to a standstill as the power is cut in order to reserve energy for future use.

Under these circumstances, one woman has suggested an alternative to loan-based development plans for building electric power infrastructure. She is not a politician with great accomplishments or a CEO of an enterprise. She is a 47-year-old graduate student named Tri Mumpuni, who is building a new Indonesia by working together with local residents to develop the nation’s natural resources.

In the early 1990s, while traveling through Switzerland as a graduate student to attend a conference, Ms. Mumpuni witnessed something she had never seen before. She spotted small hydro power generators in the deep valleys of Switzerland. Curious about the machine’s function, Ms. Mumpuni made inquiries.

She discovered that each household could produce cheap electricity using the small scale hydro power generators that harnessed the power of water that rapidly flowed through the deep valleys of Switzerland.

The Engineer who Established an Infrastructure for  Electrical Power 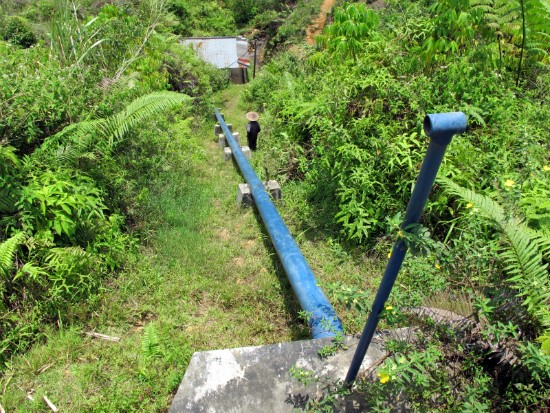 A villager checks the pipes of a micro-hydro generator.

When Ms. Mumpuni heard this, she was thrilled. She immediately thought of the deep gorges that ran through the islands of her home and considered the possibility of using the micro-hydro power system in Indonesia. She gathered information about micro-hydro power technology from the local Swiss residents and technicians and found that maintenance costs were less than she expected.  She decided, “Let’s try this in Indonesia. It might work for the villages on the islands that do not have access to electricity.”

“I realized that this is not something I can do by myself. I decided to submit a proposal to the municipality of Cinta Mekar and local businesses.”

She knew businesses and the government were interested in a profit making ventures and rarely took interest in individuals. So, Ms. Mumpuni  created an entity called IBEKA. Through this organization she submitted her proposal. The following describes the proposal’s vision.

“The Micro-hydro power plant is a perfect way to supply electricity to people in remote villages likes Cinta Mekar. This is a venture that will continuously generate profits for the community. However, it is first and foremost a civil cooperation project. The micro-hydro power plant facilities will be built in the village through the joint investment of the government, local businesses, and IBEKA. As local businesses and the village community jointly own shares, the local people will have first access to power.  The surplus will be sold to the government. The profits will be equally divided between the local businesses and the community 50:50.”

This model was dubbed a ‘Hybrid Model’ by Ms. Mumpuni.  The government showed positive response, noting that the company would set a precedent for local community development. But Ms. Mumpuni confronted an unforeseen hurdle. The local residents did not accept her vision. They doubted its possibility, and wondered if they would have to be responsible for maintenance and repairs, or if the government would do everything.

When Ms. Mumpuni realized that no resident was willing to take on the project, she moved to Cinta Mekar herself to ensure the business’ success. For two years she spent time with the villagers building close and intense communication. She focused on changing the mindset of people. To prevent the project’s failure, she worked hard to increase the village’s maintenance and repair capacity. In this way, the co-op was created with the local villagers. Even after the facilities were completed, business has continued. A couple micro-hydro power plants were built in Cinta Mekar, and in 2004, the village achieved 100 percent energy independence.

Based on the success of Cinta Mekar, Mumpuni created an ironclad principle for the hybrid model business. “Natural resources must be developed and utilized in cooperation with the local residents.” Ms. Mumpuni poured her life into this project. She traveled to 68 regions in Indonesia disseminating the hybrid model. 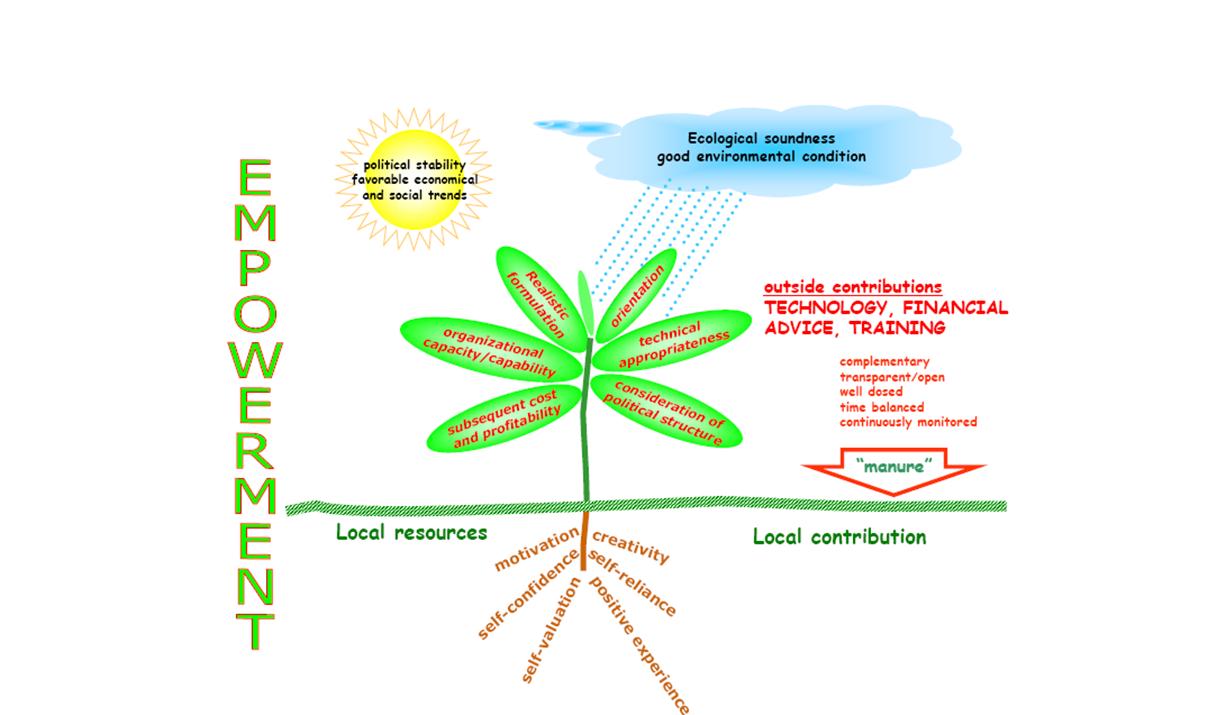 The local businesses and the village community jointly own the shares of the plant, and are supported by the government, local businesses, and IBEKA. This is her explanation of the hybrid model.

“The Micro-hydro power plant Is not just a small scale plant. The size is not the primary feature, it possess deeper significance. This project is not just about supplying power to remote villages but about initiating a change that uplifts the quality of life in the villages. Children can safely walk the streets at night; we can increase earnings as we harvest different crops and even create more jobs. The funds earned from the sale of electricity to the government can be allocated to fund provide college education for village children and life insurance for villagers who cannot afford medical expenses for surgery. The money could also be utilized for loans to people who want to start small businesses. The most important thing is that throughout the entire process, the local people are a part of the project. If our resources are developed with the consent and participation of the community that consists of individual families, we can enhance democratic participation. This is how we can begin to dream of change.”

Ms. Mumpuni travels around the globe propagating the development of this small scale environmentally friendly energy system. Even at this moment she is engaged in a dialogue with the local people somewhere spreading the message that they have the power to change their community.

“The belief that each of us has the power to change things ourselves is the real ray of hope that is illuminating the remote areas of Indonesia. I just helped foster that belief through building a sense of community.”

Original article written in Korean by:

The English version was originally published on globalpeacewoman.org.