The Vision for the Unification of the Korean Peninsula and Building a World of Peace: Global Peace Leadership Conference Seoul, Korea 2012 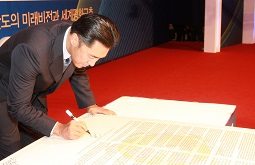 “The Vision for the Unification of the Korean Peninsula and Building a World of Peace.”

The conference convened scholars, government ministers, humanitarian and faith leaders, journalists and youth leaders to chart a course for the reunification of the Korean peninsula

Here is the first excerpt of seven posts from the keynote address of the conference Plenary.

The Korean Dream and The American Dream: Two Dreams, One Vision

The roots of this Korean Dream emerged from the mists of an ancient past. In contrast, the American Dream is a relative newcomer on 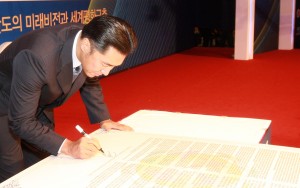 Participants of GPLC 2012 in Seoul, Korea signed the Unification Declaration, affirming the common principles and values of the Korean Dream and American Dream, and pledging to build One Family Under God on the Korean Peninsula and the world.

the stage of history. Yet there is a profound connection between the two, a connection that can serve as a bridge between the many differences of eastern and western cultures and philosophies.

During its remarkable rise in its relatively short history, the United States has been a magnet for immigrants, coming to share in the “American Dream.” As someone born in Korea who came to America as an immigrant, and as an avid student of history, I have often asked myself: What is the essence of that dream?

I came to understand that the American dream is not about getting rich. It is not even about the democratic political process or the free market economic system. Those systems would have been empty shells without the vitality of spiritual principles and values that motivated the American experiment and were poured into the structures of the new nation. This was the secret of America’s success.

These principles are the basis of our modern notion of human rights and freedoms, conveyed in the Declaration of Independence — a secular document expressing spiritual principles — which is the vision statement of the United States of America. It declares that “we hold these truths to be self-evident, that all men are created equal, that they are endowed by their Creator with certain inalienable rights, and that among these are life, liberty and the pursuit of happiness.” Thus, essential human rights are not granted by any human institution but by the Creator and, therefore, cannot rightfully be abridged or denied by any government or human institution.

Thus, the Korean Dream and the American Dream, though separated in their origins by millennia and half a globe, share the same essence.

Such a shared spiritual vision would not only nurture economic prosperity, but would strengthen democratic institutions, forming a bulwark against the authoritarian impulse at work in many parts of the world, and particularly in this Northeast Asia region. It would become the basis for a solution to economic inequalities, and create a substantial foundation for world peace. 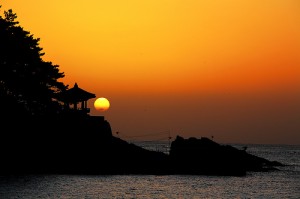 Korea can bring a light of peace to the world with its unification.

Ladies and gentlemen: We stand at a crossroads in Korea’s history. The choices we make today will have great impact on the future of this region and for peace in the world.

Korea has a great destiny nurtured by the spiritual principles of our heritage, and forged in the suffering of our history. In 1929, during the dark days of occupation, Rabindranath Tagore, the Nobel prize-winning Indian poet, wrote of Korea:

In the golden age of Asia
Korea was one of its lamp-bearers
and that lamp is waiting to be lighted once again
for the illumination in the East.

The time that he spoke of is now. Now is the moment for Korea to fulfill its destiny not only for the illumination in the East but also the world. Now is the time for Koreans to embrace and own the Korean Dream.

As Koreans we must claim our true identity, rooted in the four principles of “Hong Ik In Gan.”Living for the benefit of mankind, bringing truth into the world, governing on the basis of principle, and governing with the bright light of a powerful vision.  These must first become the guiding principles of our society in the South, and then the foundation for a reunified Korea.

I want to challenge the nation of Korea to take on the mantle of global moral leadership by championing these ideals.  On this foundation, let us aspire to be an example to the world by creating a unified nation rooted in universal principles and values, where fundamental human rights and freedoms are guaranteed.

I especially want to challenge a new generation to take charge of Korea’s destiny as your fathers and grandfathers did after the Korean War. Become the “U-Generation” that can substantially bring about a transformation in this nation, so that it manifests its providential destiny, creating one united homeland.  Then Korea can rise as a beacon of hope for all humanity through the enlightened vision of One Family under God. 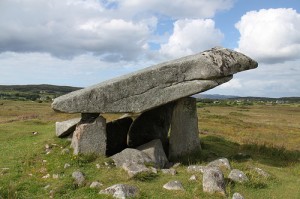 The ancient kingdom of Go(고, 古) Joseon, was established over 4,000 years ago. The dolmen is one of its signature remnants. It was built upon the philosophy of “hongik ingan,” a belief that Koreans were mean to live for the benefit of mankind.

Korea is in a unique position. The guiding vision that we develop for a united Korea can be a model for transcending the forces of division and conflict worldwide. That vision is what I call the Korean Dream.

For the Korean people to find and own their unique identity, and for Korea to fulfill its historic and providential destiny, that dream must be about much more than material prosperity. Prosperity without a vision corrodes the spirit, as we see today through the increasing divorce rate and the gradual erosion of traditional Korean values.

Koreans understand the importance of such a vision. We have always been altruistic people with big dreams. It is amazing that over 4,000 years ago, in Gojoseon, the original Korean nation, our ancestors’ lives were already guided by the philosophy of “Hong Ik In Gan.” (future hyperlink)

Taken together, these four principles have molded the Korean character, and are the basis for the traditional Korean ideals of

respecting life and nature, living for others, and honoring the one, benevolent, and transcendent “Haneunim.” 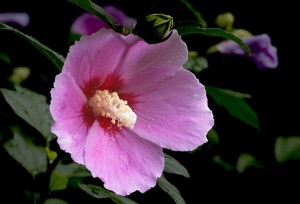 This remarkable philosophy has been a guiding and unifying thread throughout Korean history. It has been a source of moral and spiritual strength in Korea’s many periods of suffering. When the South Korean government was formed in 1948, the Ministry of Education made Hong Ik In Gan the basis of its curriculum for moral education. North Koreans as well respect this philosophy, although they have left out the most essential element, namely respect for Haneunim.

Nevertheless, this deeply ingrained perspective could form a basis for both Koreas to transcend the political and economic divide of communism and democracy and their respective national identities, as embodies in the North and South.

Framing the Debate of Unification 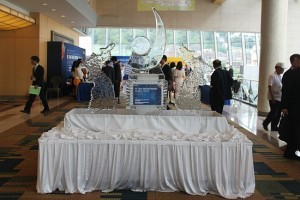 The GPLC brought leaders from all sectors to discuss alternative approaches to Korean Unification.

An effective approach to unification requires identifying and building upon those aspects and interests that we hold in common. Koreans share a unique homogenous identity, language, and a five-thousand-year cultural history, yet these have not been sufficient to prevent our division or to provide a path toward re-unification.

Likewise, both diplomatic and economic strategies have fallen short.  We can only conclude that an even greater measure must be called upon that identifies the essential common bond uniting all Koreans, and properly illuminates the way forward. Only then, can we proceed toward our rightful destiny as a United Korea.

The process for reunification should begin with a healthy debate on the attributes of a new united Korea, so that the outcome of reunification is clearly defined, and fully endorsed by the Korean people. That is why this conference is focused upon a vision and later a roadmap for reunification that is anchored in universal principles and values that speak to the very essence of what it means to be human. Such a vision can win the broad-based support of all the Korean people, both North and South.

A Holistic Approach to Peace on the Korean Peninsula 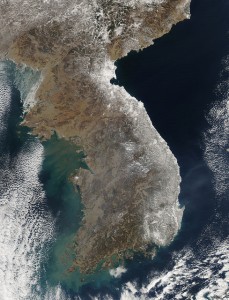 Today we face problems far more complex than those of the Cold War era. The conflict on the Korean peninsula remains as one of the most critical global flashpoints.

Yet policies that only promote diplomatic and economic engagement with the North, in hopes that exposure to democracy and the free market will encourage social transformation as it did in the Soviet Union, are naïve and ineffective. Today, we see that the fruit of past efforts to engage the North, both diplomatically and economically, has been an initial thawing of relations followed by greater mistrust and even military hostilities.

To tackle this problem effectively, a concerted collaborative grass-roots effort is needed first in the South and then the North. In conjunction, it should be supported by both states and the global community as the true wish of the Korean People to reclaim their national destiny as a united people in a united land. Furthermore, we should seek holistic solutions–beyond just diplomacy and economics—to include historical, social, political, cultural and spiritual dimensions. Finally, it must make the case that the act and outcome of unification is the safest and most effective means to peace and prosperity for the Korean people and the world.

Making the Vision of One Family Under God a Reality 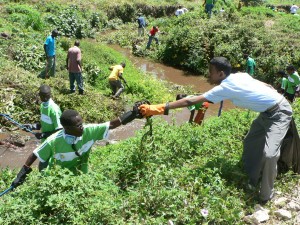 The work of GPFF today in Korea stands on a strong foundation of achievement globally. We have worked with partners in government, business, the non-profit sector, and faith communities to develop model projects that help communities and nations move beyond conflict, and promote unity. These projects show how the vision of One Family under God can be given concrete reality.

For example, after Kenya’s post-election violence in 2007, we worked with political leaders from both sides and with local communities in the Rift Valley to address the roots of the conflict. As an indication of progress made, in 2010, both President Kibaki and Prime Minister Odinga, the rivals in the 2007 election, spoke on the same platform at the GPFF annual convention in Nairobi.

Our national chapters around the world are also actively engaged in many grassroots projects and community initiatives. They especially work with young people on service projects and character education programs, helping them to develop leadership qualities and a spirit of ownership.

The Global Poomashi project, for example, sends Korean students overseas to work with local youth, and learn to respect other cultures. This project is currently operating in Kenya, Nepal, Mongolia, Indonesia, and the Philippines. Through it young Koreans are expanding their horizons and learning that Korea can contribute greatly to the world.

Balanced and Sustainable Solutions to Conflict 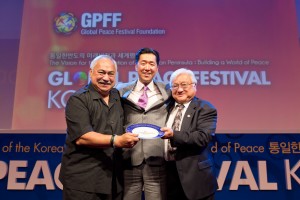 Sustainable solutions ultimately must address root causes and, so must include the spiritual dimension of the human experience. A shared spiritual vision for humanity is the compass needed for these challenging times. Such a vision is found in the simple but profound idea that all human beings, regardless of ethnicity, nationality, faith, or class, are part of “One Family under God.”

Simply put, political authority cannot mandate, nor can money buy, the virtues needed to resolve conflicts and build ethical societies. We need a new framework for peace rooted in our shared spiritual aspirations, principles and values that can form the common ground for cohesion within society and for the peaceful resolution of conflicts.