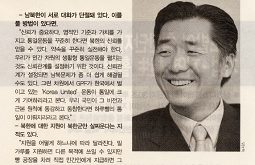 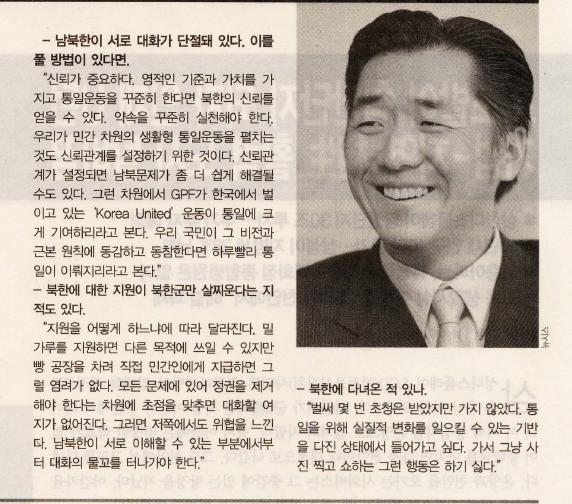 He encouraged the journalists to use the media to “educate well instead of coming up with conspiracy.” The Korean media, Dr. Moon said, has a critical responsibility to inform the public of  “real news that will affect the fate of the Korean people. ”

Shin Dong-A ran the interview in its January edition.

Global Peace Foundation Chair Hyun Jin Moon stressed in his opening speech at the Global Peace Convention, GPC Atlanta 2012, “We need a new framework rooted in our shared spiritual aspirations and principles that give rise to the values needed to build peace.”

During the interview, he gave an overview of GPC Atlanta 2012 and talked about GPF’s movement for Korean reunification.

Shin Dong-A: Why was Atlanta selected to host the GPC?

Dr. Moon: Atlanta is a place rich with history and faith. It was the center of the civil rights movement, led by Dr. Martin Luther King; it is also the home of former U.S. president Jimmy Carter, who has been deeply involved with the Habitat for Humanity movement.  The King Center and The Carter Center are located here. They both were a part of the conference. I have always seen the civil rights movement as not just the struggle for African American civil rights, but as a great spiritual movement to awaken all humanity. We can rekindle that spirit in Atlanta and make a global awakening that will offer a new perspective for peace.

Dr. Moon: What is the relevance to Korea? This is an international gathering. I’m actually building awareness of how important the unification issue and the unification movement that we initiated is in terms of American foreign policy.

Before that unification process happens, America also needs to help Korea. Of course Korean people should actually initiate, but it actually needs the aid of many international parties to support the process, and this is an effort to build that support.

This whole process that is happening right now, I went from Mongolia to Korea, now to the United States, and I’m planning on doing a GPF in Japan, I’m basically bringing this entire region, not just the United States, North and South America. So it’s this entire Pan-pacific rim that is recognizing this as a major issue not only in terms of security but in terms of stability of the region.

Shin Dong-A: You underlined the importance of civil diplomacy. What do you think of the current government’s policy towards North Korea?

Dr. Moon: It needs to re-engage. No matter who wins [the Korean election], most likely there will be re-engagement.

Shin Dong-A: Dialogue between North and South Korea has stalled. How can this situation be resolved?

Especially if the Korean people take ownership, if this really becomes a national movement that really moves, “North and South Unity” will be just around the corner. Dr. Moon: In order for unification to happen in Korea, there has to be trust established. Trust is essential.

I believe in the Korea United initiative that I started. I think there is tremendous power there. Especially if the Korean people take ownership, if this really becomes a national movement that really moves, “North and South Unity” will be just around the corner.

Shin Dong-A: There is criticism that aid to North Korea will end up benefiting only the government of North Korea.

Dr. Moon: It all depends on what kind of aid is provided. If we offer flour aid for example, it can be used for another purpose. But if we set up a bakery plant and have baked goods produced for consumption, we don’t have to worry about those kinds of problems.

That is one of the great things about how we framed the Korea United movement. We’re talking about outcomes, we’re not talking about, “We need to get rid of this regime”; we’re talking about outcomes for the entire Korean people. You give room so that it does not become a confrontational issue. And not only that, it’s non-threatening. That’s the power of the framework of establishing the outcome, and what are the principles and values that are going to lead you there.

Shin Dong-A: Have you been to North Korea?

Dr. Moon: I have been invited several times, but I haven’t been, yet. I would like to go when I have established a foundation upon which I can make a substantial contribution towards reunification. I do not want to go for political show, to just take pictures.