Service is a Universal Value

Service is a universal value that resonates in all great religions.

The recent commemoration of Dr. Martin Luther King, Jr. in the United States brought focus to the “vibrant spirit of unconditional love” as the powerful force of Dr. King’s leadership. He quoted Mark and left one of his enduring understandings that “everyone can be great, because everyone can serve.”

Two recent posts on the Global Peace Foundation identified service as a common thread in the presentations and discussions among faith leaders at the Interfaith Forum prior to the Global Peace Convention 2013.

In the session “Faith Leaders for a Greater Good,” Archbishop Pakiam of Kuala Lumpur affirmed his belief that “all great religious leaders hold similar if not identical signature tune.” One melody that he highlighted was that of service. “When we live out a spirituality of drawing nearer to others, and seek their welfare, our hearts are opened wider to God,” he said.

As an example, he shared the testimony of a minister from a remote part of his diocese who visits an elderly Malay Muslim couple every week. Every week the minister comes to help the wife bath and cloth the husband who is bedridden from a stroke. Archbishop Pakiam told Forum participants, “This is an example of holiness, of a spirituality that reaches out to others that is in need.”

In another session, Dr. M.M. Verma, founder of Interfaith Foundation in India, said in response to the question of resolving inter-religious tensions strongly stated, “If you worship the Lord, it means one thing and one thing only, that you serve His people, you serve mankind.” He asserted that praising the name of God is not enough. “If we praise his name, but harm His creation, we have committed the greatest disservice to the One that we love. As God is our parent, we are closer than just cousins. We are brothers and sisters.” 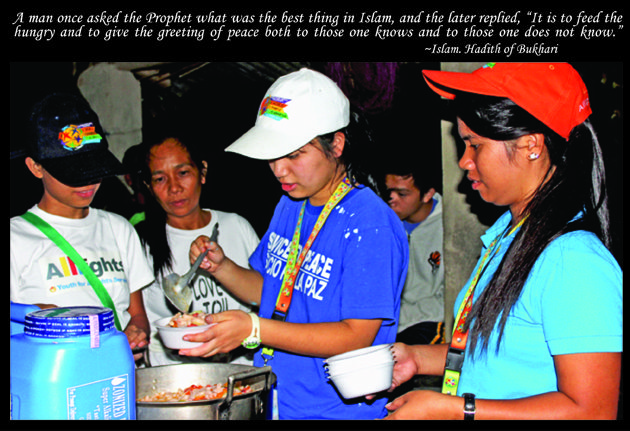 There are examples in other religious texts that also affirm service as a fundamental value. In the Hadith of Bukhari there is a passage that recounts a man asking the Prophet, “What is the best thing about Islam?” to which the Prophet responds, “It is to feed the hungry and give the greeting of peace both to those one knows and to those one does not know.” In the Jewish Mishna, Avot 4.1, it is written, “Who is honored? He who honors mankind.”

The human family has been dissected into many small segments that are kept apart by pretensions of religion, race, nationality, culture, even gender. Yet, service, the value of going beyond one’s personal needs to consider the needs of others, is still present in the spiritual heritage of humanity. It transcends divisions. So, in large and small ways, inspired individuals can begin to break down the pretensions that separate humanity, simply by living for each other.